The biggest area of concern to me was the ineffectiveness of the spinners. Agreed, there was no help whatsoever for them off the surface, but both Ravichandran Ashwin and Ravindra Jadeja are experienced and skilled enough to use the air as an ally.

Pakistan s extraordinary performance in the final brought the curtains down on a spectacular Champions Trophy. Few would have given Pakistan, ranked eighth at the start of the tournament, any chance to go all the way and more so after their heavy defeat to India in their first league encounter. To comprehensively outplay the same opponent in the final is a testament to Pakistan s spirit, to the power of will and determination, and a success of a system that, despite the absence of international cricket in the country, keeps throwing up one special talent after another.

This tournament will stand all teams in good stead going into the 2019 World Cup, of course. One of the things that is established now is that batting in England is not as challenging as it used to be. There was a clear slant towards producing good batting surfaces, so lateral movement will no longer be as pronounced as it was in the past. Add to it the fact that there was no swing various theories have been propagated, and I feel the absence of swing had more to do with the Kookaburra balls than anything else and the bowlers really had their work cut out. That is why it was wonderful to see Pakistan use reverse swing to excellent effect. They were the only ones skilled enough to maintain the ball and get it to reverse, which is why they were a wicket-taking force in the middle overs, unlike several other sides.

While Pakistan will understandably bask in the glory of a sensational campaign, India will look back at what might have been. They will be disappointed; no doubt, that for all the brilliant cricket they played in the lead-up to the final, their title defence fell just short, but there is no reason for the team to not walk with their heads held high. They were not at their best in the final, but they were well beaten by a team that was truly on top of its game. There is not any disgrace in that.

India ticked several boxes, not least at the top of both their batting and bowling innings. One of the things I was really interested in going into the tournament was how well Shikhar Dhawan and Rohit Sharma would cope with opening the batting. I am delighted that they both batted brilliantly to finish 1 & 2 respectively in the run-scorers charts. Shikhar was outstanding, both mentally and in the manner in which he batted. He has always been a rhythm player who is impossible to stop when he gets on a roll. The fact that he has worked on various aspects of his batting the back lift, for instance, and the way he cocks his wrists, the way the bat comes down and the follow-through, not to mention a still head and balance at the crease have made him a more completed and rounded batsman.

Shikhar was able to play on either side of the wicket with equal felicity, both off back foot and front. If you were to produce a package with some of the shots of the tournament, he will figure prominently and often, such was the quality of his stroke-play. The Champions Trophy has always brought the best out of him, and he once again proved his value. The fact that he was able to come down the track to the likes of Morne Morkel and Kagiso Rabada, and smash them over mid-on, suggested that he had plenty of time to play even the quickest of bowlers.

When you talk time and timing, you do not need to look beyond Rohit. One of the first things that struck me when I saw Rohit for the first time was how much time he seemed to have to play even the fastest of bowlers. Over the years, as he has stacked up more experience, he is completely at home in white-ball cricket. This tournament was to be a big test for him. He was returning to international cricket after a long layoff, and was opening the batting for the first time since October. He started slowly, which is understandable, but as he spent time in the middle, the confidence started to return and by the end, he was back to his best. He and Shikhar form an excellent pair at the top of the tree, and I do not see India disturbing this pair going forward. The return from injury of KL Rahul will provide them an additional option, though at this moment, if I were to take the call, I would explore a middle-order slot for Rahul more than as an opener.

Virat Kohli was in majestic touch almost all the way, but he also showcased another facet to his batting patience. He did not exactly race off the blocks in the first match against Pakistan, but he did not allow frustration to get the better of him. One of the dangers of being as supremely skilled as Virat is that sometimes, you can allow your ego to get the better of you. Virat kept his natural attacking instincts in check when the going was not easy at the start of the innings. But once he found his range with that extraordinary six over long-on, he effortlessly shifted gears and continued to bat gloriously until in the final when Aamer had his number.

This top-three will be the key to India s fortunes at the World Cup. I know the World Cup is still two years away, but it is time to start thinking and planning for the event, if not actually preparing for it already. It is towards that end that the middle-order did not offer too much insight. The opportunities they had were too limited. Yuvi had one brilliant knock against Pakistan, MS timed his charge superbly against Sri Lanka and Kedar Jadhav did his reputation no harm at all in his limited chances. Kedar brings more value with his tricky, seemingly innocuous off-spin, and will definitely be in the mix come 2019. MS is still as brilliant behind the stumps too as he has been, but both he and Yuvi are getting on in years. I believe both have plenty more to offer provided they remain fit and retain the hunger. How the team management and the selection panel look at them, and what course of action they want to take, is another matter altogether. India have a host of ODIs this year, and I think by the end of those skirmishes, we will have a clearer picture of what shape the middle-order will assume by 2019.

The one man who took my breath away with his ball-striking was Hardik Pandya. I have always been a fan of how cleanly he hits the ball, but he is a more mature and intelligent batsman these days and that makes him such a dangerous batsman coming in at 5 or 6 or 7, depending on the game situation. He is the successor to MS as the finisher India have been looking for, though he is also more than that. He has a wonderful head on his shoulders, and if he can work on his bowling a little more, he will easily be one of the more influential members of the team. The problem with his bowling is his lack of control and consistency of length. Especially on slow surfaces, when he bangs the ball in, he does not have the pace to trouble the batsmen and can be taken for big runs, but as he himself showed, when he pitches the ball up and looks to vary his pace, he is a far more dangerous bowler. If he can give 6-7 good overs on a regular basis, then he will be an even bigger asset; having seen how much progress he has made in a short span of time, I am confident he will emerge better with more games and more experience under his belt.

As expected, Bhuvneshwar Kumar and Jasprit Bumrah were wonderful throughout the tournament, both with the new ball and then at the death. Both are wicket-taking bowlers and have almost perfected their control over lines and lengths. The manner in which they tucked up Quinton de Kock and Hashim Amla was a perfect example of their versatility, adaptability and command over their craft. I expect them to be the bulwarks of the fast bowling group, and the depth in the pace unit is emphasised by the fact that India could not find a place for Umesh Yadav after the second match, and for Mohammed Shami throughout the tournament. Fitness/injuries apart, these will form the pace attack at the World Cup alongside Hardik, and the prospects are electrifyingly exciting.

The biggest area of concern to me was the ineffectiveness of the spinners. Agreed, there was no help whatsoever for them off the surface, but both Ravichandran Ashwin and Ravindra Jadeja are experienced and skilled enough to use the air as an ally. Unfortunately, they were neither penetrative nor economical. They simply did not put any pressure on the batsmen in the middle overs, and that is not an encouraging development. Virat would have looked to the two to pick up wickets between overs 15 and 40, but that was not to be. Both of them must find ways to string together more wicket-taking deliveries in the middle stages.

I think the time is ripe to explore a few wrist-spinning options. There is Kuldeep Yadav, the left-arm wrist spinner who is now with the team in the West Indies, and Yuzvendra Chahal, the right-arm leggie. It is worth seeing what these two can bring to the table in the next few months. Wrist spinners were tremendously successful in the IPL and had their moments at the Champions Trophy, not least Imran Tahir and Shadab Khan. They are attacking bowlers who might go for runs but will pick up wickets. It is something India should and must seriously consider as they strive to go from a very good outfit to the best in the world. 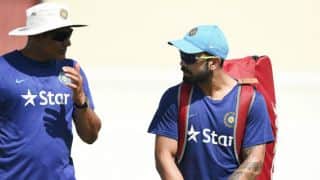