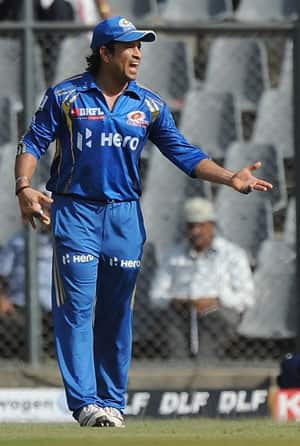 Sachin Tendulkar will have to accommodate within his cricketing persona the political statesman that he is expected to be. The fusion has to evolve and grow into a new persona, which in no way supplants the original © AFP

While Tendukar’s followers and detractors have kicked up a debate on the merits of his nomination and his ability to justice in the Upper House of Parliament, political parties of all hues have almost instantly endorsed it. It’s a master stroke by the Congress, given Tendulkar’s magnetism with the masses. In Maharashtra, where the Congress-NCP and the BJP-Shiv Sena are evenly matched electorally, Tendulkar’s perceived preference to a side could stem a party’s sagging popularity, even if only marginally.

Tendulkar is a popular sentiment which refuses to wear off. Perhaps the nation was more relieved on the master finally reaching the much-awaited hundred international centuries than on the successful launch of the ICBM Agni V! The party had to rope him in when still playing and on the crest of popularity, and not after he retired with his brilliance reduced to nostalgia.

Tendulkar will have to accommodate within his cricketing persona the political statesman that he is expected to be. The fusion has to evolve and grow into a new persona, which in no way supplants the original.

In an interview following his nomination, Tendulkar remarked: “Cricket is my expertise… I am a sportsman and I will always be a sportsman.” With this thoughtful statement, Tendulkar clearly spelt out his priority.

The Board of Control for Cricket in India (BCCI) will also have a powerful voice in the Parliament. The BCCI is truly autonomous, not even subject to the Right to Information Act 2005, yet the government of the day can always bring in dispensation to regulate the industrial features specific to the game, including dealing with criminal and economic offences. Tendulkar’s insight and input in the context will be valuable and no doubt facilitative.

Over the years cricket has become part of real-politik, a diplomatic arm, especially in dealing with neighbouring countries. A cancelled / suspended cricket tour, either from India or Pakistan, conveys an unmistakable message that the relations between the two countries are on the descent. Resumption connotes a thaw in the relationship. A match at Lahore or Mohali or Delhi leads to significant rise in people-to-people contact between the two nations. Heads of States and Prime Ministers have graced the matches with their presence. Former Pakistan President General Zia-ul-Haq was in Jaipur in Feb 1987 on Rajiv Gandhi’s invitation to watch a Test at Jaipur and later called it a cricket for peace initiative. President Musharraf visited Delhi to watch a One-Day International. Prime Ministers Gilani and Manmohan Singh graced the World Cup semi-final at Mohali last year.

Tendulkar’s acceptance transcends the national boundaries. He may well be called upon to play an important role. His presence in any bilateral peace initiative will lend the effort credence and dignity.

Tendulkar will also be expected to be a bridge between cricket and the other games. Often, the game of cricket and its exponents have been held by the ones in other games in awe and envy. This became an articulated resentment when Michael Ferreira refused to accept the 1981 Padma Shri award to protest against the prevalent practice in India of giving cricket prominence over other sports. He voiced his opinion that his feats in billiards were not in any way less than Sunil Gavaskar’s and he was as much suitable as Gavaskar to receive the higher award, namely the Padma Bhushan. There can be several instances of simmering resentment. Tendulkar, with his universal acceptability, could work for a larger fraternity of sportspersons. He could also work for a system of benevolence, gratuity and pension for those who are past their playing years or otherwise in need. It will definitely add a few notches to Tendulkar’s stature, enhance his acceptability beyond the boundaries of his own game, if he proposes Bharat Ratna for Dhyan Chand.

Tendulkar’s cricketing journey over two decades has been exceptional in many ways. It is really remarkable that he never had been in any serious controversy at any point of time. His on-field conduct as well as off it has been impeccable. All along, Tendukar has remained laconic, a man of few words. This has been his strength. He hardly ever volunteered his views, unless that was required as of convention or duty. His interface with the media soon after his 100th ton was perhaps the only occasion when he appeared over-reaching in his articulation.

His achievements and his measured conduct made him perhaps the most respected gentleman in cricket. The testimony of this man of few words in the Monkeygate episode was enough to ensure Harbhajan a safe passage. Tendulkar hardly has any to reason to change in his approach to issues and problems that may unfold or brought before him in the Parliament. He must also believe now, along with millions of his followers, that failure is alien to his destiny and that he is here as the Chosen One.

(Gaurav Sahay holds a Master’s degree in Business Administration and is set to complete a degree in law. A banker by profession, his interests range from cinema, music, astrology and, of course, cricket – especially its history, evolution, social impact and economic importance)