As Borthwick and Tredwell fly down for the remaining Tests, who else can England turn to?

Since the days of Tich Freeman and Doug Wright, when they straddled generations of County batsmen with their bagful of tricks, England haven’t produced leg-spinners who have made an army of finest batsmen march back to the pavilion. So, when England selectors called up leg-spinning all-rounder Scott Borthwick along with the veteran Kent off-spinner, James Tredwell to bolster the England squad after the untimely retirement of Graeme Swann, it aroused the interest of seasoned scribes and fans alike. England selectors plumping for Borthwick can be termed as a gamble, as his record in First-Class cricket isn’t remarkable.

In this article, the writer intends to look at Borthwick and other spin options for England with a bird’s eye-view.

After shining brightly in the North East Premier League (Durham) for a few seasons, the Sunderland born Borthwick first caught the eye during England Under-19 team’s tour to the Rainbow Nation in the 2008-09 season. He didn’t exactly deceive South African batsman by the path of his flight and guile. Nor did he bamboozle those batsmen on a slow walk back to the pavilion with a bewildered look on their face. Yet, for a 19-year old, cricket pundits reckoned that he had good enough control for a spinner.

He finally made his County debut at the fag end of 2009 season for Durham against Hampshire at Rose Bowl. He was picked more as an all-rounder in that game. His breakthrough season came only in 2011 when he took a five-wicket haul against Sussex at Hove. It has to be remembered that the Sussex outfit with Murray Goodwin, Michael Yardy, Matt Prior and Chris Nash had a decent batting line-up. He was also impressive in the County game against Warwickshire when he took a four-wicket haul.

A few fine performances during that season meant he was picked in England’s touring squad to play the One-Day International series in India in 2011. The Indian batsmen famed for their batsmanship against spin feasted on Borthwick’s brand of leg-spin. But it should have been a good learning experience for the Durham all-rounder.

This year, Borthwick took only his second five-for in County cricket against Surrey at Oval. On a track that aided spinners, he spun Durham to victory and won fulsome praise from his captain Paul Collingwood. At the post match presentation, the disarming smile of Borthwick gave an inkling as to here was a cricketer who enjoyed his cricket. His spell of six for 70 can turn out to be the watershed moment in his career.

Borthwick isn’t known for imparting much turn, but relies more on bounce and accuracy. When the youngster won a nomination for  County Championship Breakthrough Player Award, he told the thenorthernecho.co.uk, “ Going back to last season, it was obviously quite frustrating because I think I only bowled 120 overs the whole season with all the bad weather we had.

“And when I went away with the England Lions, I didn’t bowl much over there either. So when the season started with Durham, I was excited to get a run in the game and get back to bowling.

“I have already bowled more than 150 overs this season, and I have got more wickets as well and have been getting into a good rhythm which is key for a spin bowler.

“I am also enjoying the chance to bat at No3 as I have never done that before in first class cricket, but it has gone well so far and hopefully it can continue for a long time,” he stated.

Lest we forget that Borthwick these days bats at No 3 for Durham. So, he can turn into a fine all-rounder for England in the years to come. Recently, the left-handed batsman made 135 against Surrey on a seaming deck at Chester Le Street, where the ball can move around in a zig-zag fashion. He is a superb fielder, quick, athletic, good hands in the slip cordon, and has a great arm too.

Borthwick’s 34 wickets at 33.52 may not make for a great reading. However, bowling leg-spin on a seaming deck at Chester-le-Street is as tough as bowling seam-up on a flat deck at Taunton.

The veteran Kent off-spinner has been more successful in the shorter versions of the game for his team. Even this season, his First-Class record of 17 wickets at 56.76 is nothing to write him about. His ODI record of 36 wickets at 24.88 gives ample proof of Tredwell being more suited to the abridged version of the game.

Tredwell’s strategy in ODI cricket is to bowl slower through the air and as he has this tendency to hold his action up a little bit in the air, before delivering the ball, he anticipates a batsman’s footwork better than most going around. However in Test cricket, top-class batsmen will likely milk him away for runs easily. At best, he is a stop-gap option for England.

With England having won the Ashes series before the Oval Test, they tried to experiment with the line-up by resting Graeme Swann and brining in slow left arm spinner from Lancashire — Simon Kerrigan. The young SLA though, had a forgettable outing as he was sledge-hammered by the Australian batsmen.

The SLA from Lancashire, in County Cricket, has showcased that he can get more purchase on the ball. However, there is a feeling that Kerrigan touched towering heights in County circuit on numerous occasions mainly due to Lancashire playing lots of their games on turning tracks at Aigburth in Liverpool. It is hard to judge any cricketer on the basis of a mere eight overs in Test cricket. But for the time being, his nondescript performance at Oval has resulted in English selectors losing faith in the greenhorn from Lancashire.

The German born Ollie Rayner who plays for Middlesex is a handy all-rounder.  Recently in a reality-altering spell for him, he took 15 wickets for 146 with his off-breaks in a match against Surrey at Oval. County cricket’s cognoscenti though, tell his figures was mainly due to the fact that the track was a raging turner. Just like Tredwell, he doesn’t impart much purchase on the ball.

A few years ago, the leg-spinning all-rounder Adil Rashid was hovering on the selectors’ radar. However, as the years have ticked by, he now finds himself more in the lonely world of wilderness. In 2013, his 29 wickets in First-Class cricket came at a not too impressive average of 46.82.

The Darlington (Durham) born Surrey off-spinner Ryan Buckley picked up five wickets in the same match that Borthwick picked took a six-for. But with just two First-Class games under his belt, he still has a long way to go.

Worcestershire’s Moeen Ali with his Amla-like long beard has always been popular with the County’s faithfuls. This season, he soared to compelling peaks by accruing 1420 runs at 59.16. He is also a steady off-spinner in his own right. He picked up 31 wickets at 36.55 in 2013. There is a school of thought that reckon if Borthwick can be picked then why not Moeen Ali, as he is a better batsman and a handy off-spinner too.

The long shot among spin options for England is Middlesex’s Ravi Patel. The young left arm spinner has already caused ripples in domestic circuit by snaring 40 wickets at 27.97. Good judges of County Cricket rate him highly. He still has some way to go, before national selectors start to consider him.

For the time being, the best England can hope for is to stick with the seasoned veteran left arm spinner Monty Panesar, and with time the Durham all-rounder Scott Brothwick if he can find those vexing answers to his problem of bowling too many four-ball deliveries and develop into a fine spinner. 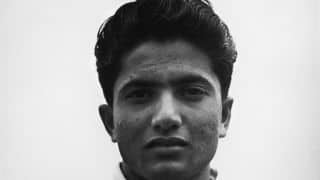 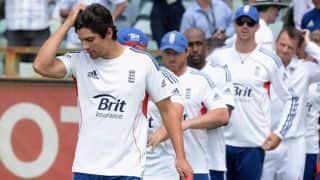