Fawad Ahmed started off by doing odd jobs to make a living in Australia.

In 2010, Fawad Ahmed, a First-Class cricketer, came to Australia to start a new life. Little did he know then that his cricketing dream was still alive. Fawad went on to become a citizen of the country and represented them in one-day cricket in 2013. Nishad Pai Vaidya caught up with Fawad in Melbourne and spoke to him about the remarkable journey from Pakistan to the Melbourne Cricket Ground (MCG).

When Imran Khan’s “cornered tigers” lifted the World Cup Cricket in 1992, a cricket-crazy nation was inspired to follow their dreams. A generation of young men were inspired to take up the game and bring emulate Imran’s men on the biggest stage. Among them was a 10-year-old Fawad Ahmed, who watched some of the leg-spinners with awe and aimed to walk in their footsteps. READ: Fawad Ahmed’s jersey logo controversy: Cricket Australia needs to be given credit for culture of tolerance

It is quite ironic that more than two decades down the line, Fawad calls the scene of that Pakistan triumph — the Melbourne Cricket Ground — as his home ground. “This is amazing and strange,” says Fawad, “But, I feel happy and proud to play at the MCG. I have a good record here and inshallah I will continue to play here. This is my home-ground.”  Cricket World Cup 2015: POINTS TABLE

It has been five years since Fawad set foot on Australian soil as a refugee. Back in Pakistan, he was a First-Class cricketer with a few games behind him following his debut in 2005. Away from the field of play, Fawad worked with an NGO in one of the sensitive areas of the country. Fearing for his safety, he came to Australia to seek refuge. “I came here five years ago [in 2010] and struggled to survive initially. The culture, environment etc. is very different. But, if you work hard, you will see a way through,” he says. ICC Cricket World Cup 2015: SCHEDULE & MATCH DETAILS

It was not easy for Fawad, who started off by doing odd jobs to make a living in Australia. Along the way, he started playing club cricket and found a good support group that helped him keep his dream alive. It started with him trying to fit into his new world, resuming the sport he loved, and getting his cricket back on track. ICC Cricket World Cup 2015: Complete Coverage

Fawad says: “It gives me great happiness that I get so much support from people. It is an inspiration and it is all due to their love and support. I thank Allah. The Melbourne University Club (where he started playing), Cricket Victoria and of course Cricket Australia played big roles. There were people from different communities who also helped me here. All that only boosted my morale.”

In 2012, Fawad started playing for the Melbourne University Cricket Club. Within a few months, he made his debut for the Melbourne Renegades at the Big Bash League (BBL) and was soon spoken of as an Australian prospect. For that, he needed to become a citizen of the country; that was finally granted to him in mid-2013. Soon, he found himself in the Australian one-day squad for the tour of England. “It gave me great happiness and it was a huge honour to play for Australia,” Fawad reflects on the day he first donned the jersey.

Fawad has not played for Australia since 2013, but remains positive in his cricketing journey. At the time of writing, he is second on the list of leading wicket-takers in this season’s Sheffield Shield. “I am trying to help Victoria win games, so that we go into the final and win it,” says Fawad as he harbours hopes of an Australian recall.

It has been quite a story. From a boy who started off in the by-lanes of Pakistan, to the man who donned the Australian jersey — Fawad’s story is heartening. “As a young boy, I used to play in the by-lanes of our neighbourhood. Pakistan had won World Cup Cricket in 1992 and then the big event was held in the subcontinent in 1996. I was inspired to take up leg-spin by watching Shane Warne. Mushtaq Ahmed was inspirational during the 1992 World Cup. Even Anil Kumble and Shahid Afridi were inspirations to take up leg-spin,” reflects Fawad on his young days. If he gets another shot at the highest level, he would do everything to emulate some of his heroes.

Cricket has been a force in Fawad’s life as he now plays the game full-time. He has overcome great odds to make a living for himself miles away from his native land, that too by doing something he is passionate about. However, he has not been able to meet his family since he left Pakistan five years ago. Earlier, he was struggling to adjust to new surroundings; then cricket came along to keep him busy. Fawad hopes to reunite with them one day. Given the way he has turned his life around in the last five years that could very well be possible. 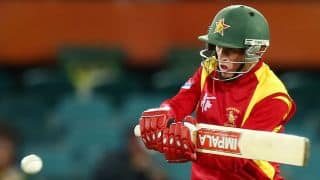