Fazal Mahmood, Pakistan’s Brylcreem boy, was one of the foremost finest fast bowlers to emerge from the region. He is well-known for the role he played in helping Pakistan get to the Test level, and for his magnificent performances during the nation’s inaugural tours of India and England.

Fazal Mahmood, Pakistan’s Brylcreem boy, born February 18, 1927, was one of the foremost finest fast bowlers to emerge from the region. He is well-known for the role he played in helping Pakistan get to the Test level, and for his magnificent performances during the nation’s inaugural tour of India in 1952 and the famous Oval Test against England in 1954. Karthik Parimal looks back at the career of this Pakistani legend.

Irrespective of the circumstances, Pakistan has a history of producing exceptional performers, in both departments of the game. Bowling has been their forte, and it’s not an area that has only blossomed during recent times. The seed of fast bowling in the region had been planted decades ago, and a certain Fazal Mahmood from Lahore had a major role to play in that. Like Shoaib Akhtar once stated, Fazal was a torch bearer. During his international career, which spanned from 1952 to 1962, Pakistan achieved the rare honour of beating every country that participated in Test cricket, and majority of the victories can safely be attributed to the brilliance of Fazal.

Before Partition, Fazal began his First-Class career by playing for Northern India in the Ranji Trophy. His leg-cutters flummoxed many a batsman and he was a certainty for the Australian tour with the Indian team in 1947-48. But he opted out once Pakistan as a separate nation was announced and preferred to offer his services there. Prior to getting its Test status, Pakistan played against the touring West Indies and also travelled to Ceylon. It was during this period that Fazal’s heroics were on display, and it is believed that he was instrumental in Pakistan’s entry into official Test cricket.

Pakistan’s first-ever Test was against India, in the October of 1952, at the Feroz Shah Kotla in Delhi. The visitors were hammered by an innings and Fazal had a rather quiet outing in that game. But the second Test at Lucknow will always be cherished by the Pakistani supporters, for their side had trounced India by an innings and 43 runs this time. Fazal scalped 5 wickets in the first innings and 7 in the second, and there is little doubt that his match figures of 12 for 94 made possible this victory. He finished the tour with 20 wickets, at an average of 25.51, and also contributed 173 runs with the bat at an average of 28.83.

Fazal is renowned for his contribution in the 1954 Oval Test that Pakistan went on to win by 24 runs. On a wicket that barely contained runs in it, the visitors batted first to post a paltry 133. In response, the English were skittled out 3 runs short for 130. Fazal took 6 for 53 in 30 overs. He was not much use with the bat in Pakistan’s second innings total of 164, but returned to take yet another six-wicket haul, conceding 46 runs, as the English collapsed from 109 for 2 to 143 all out.

“This was to be Fazal Mahmood’s match. His action was not prepossessing; but he was strong, immensely fit, built like the policeman he was and, in many ways, was the ideal fast-medium bowler. His length was consistently accurate, he took punishment well, his stamina and determination were such that he never flagged and, given the opportunity of a breakthrough, he would persist untiringly,” John Arlott wrote when reminiscing of this momentous game. This was to be Pakistan’s first victory in Tests over England, and it was a special achievement since it came at a time when most of the other nations in the arena, albeit starting much earlier than Pakistan, were still busy finding their feet.

Two years later, in 1956, when Australia stopped over at Pakistan for a Test after a tour of England, Fazal stole the limelight yet again. He took 6 for 34 and 7 for 80 in two innings as Australia could muster just 80 and 187 respectively on a matting wicket. He apparently moved the ball both ways and had the visiting batsmen hopping at the crease. “He would bowl the middle and off-stump line, then used the seam smartly to make the ball go down close to leg stump, which made it uncomfortable for the batsman. For one whole over from Fazal in the first innings, even the great Miller had no clue,” said former Pakistani Test cricketer Imtiaz Ahmed in an interview to Wisden Asia Cricket.

The mantle of captaincy had been transferred to Fazal during the later stages of his career. Australia toured Pakistan again in the November of 1959, this time for a three-match series, and they comprehensively beat the hosts by a margin of 2-0. The team then toured India, where all five matches resulted in draws, and Fazal, who was already being scrutinised for his leadership, was stripped off his captaincy. He was left out of the tour of England in 1962, but was called back when the bowlers of the touring party were sidelined due to injuries. However, he could not replicate the 1954 scenario.

He quit the international stage with 139 wickets from 34 Tests, at an outstanding average of 24.70 and an economy rate of just over 2. He collected 4 ten-fors, 13 five-fors and 6 four-wicket hauls by the time he hung his boots, which speaks volumes of the man’s efficiency. He continued playing First-Class cricket for two more years post retirement. 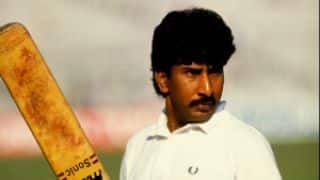