Let us look at Test cricketers who were born on Portugal.

The football fever is running high and the FIFA World Cup 2014 has caught everyone’s attention. Even though there are three different cricket series underway, all the limelight has been hogged by football’s biggest event on the planet. On Monday night at 0930 pm Indian Standard Time (IST), two champion sides — Germany and Portugal — are set to clash in one of the epic battles of this tournament.

As the fans are busy preparing to root for their favourite players and teams, and just like everybody, the game of cricket too finds itself ironically associated with one of the participating teams for tonight. Among the many who have graced the sport of cricket which is certainly doesn’t have a massive following as football, there are a few who were born in Portugal.

1. Ebrahim Maka: Born in Daman (a former Portuguese territory), Maka played two Tests for India. He played 34 First-Class matches, and scored just 607 runs at an average of 15.56. It is considered that Maka’s tidy work behind the wickets was undone by his efforts with the bat, and despite making an impressive debut against Pakistan in 1952-53, he failed to build up on that. In 34 First-Class games, he had 58 catches and 27 stumpings, which establishes his effectiveness behind the wickets.

2. Dick Westcott: Born in Lisbon, Portugal, Richard John Westcott played five Tests for South Africa, and overall played 51 First-Class games. In the second innings of his debut Test against New Zealand at Cape Town in January 1954, he scored 62 runs, which remained his highest of his career. While he scored only one half-century in Tests, in the 51 First-Class games Westcott smashed 3,225 runs at an average at 36.23, studded with four tons and 23 half-centuries.

3. Dilip Sardesai: Considered as the one who changed the face of the Indian cricket by masterminding their series win in the West Indies in 1971, Dilip Sardesai was born in Margao, Goa, which was under Portuguese rule at that time. Born August 8, 1940, Sardesai played 30 Test matches for India and scored 2,001 runs at a healthy average of 39.23. He scored five centuries and nine half-centuries. In 179 First-Class matches, Sardesai scored more than 10,000.

4. Antao D’Souza: Born in Goa (former Portuguese colony), Antao D’Souza went on to play six Test matches for Pakistan. He claimed 17 wickets in those six Tests, and 190 in just 61 First-Class matches at an economy rate of 2.53. The highlight of his career was Pakistan’s tour of England in 1962, wherein he averaged 53 and was unbeaten on five out of the six innings he batted.

5. Moises Henriques: Born in Funchal, Portugal, Australia’s Moises Henriques is the fifth in the list. Henriques made his One-Day International (ODI) debut in October 2009 and his Test debut in February 2013. So far he has played three Tests and five ODIs. Henriques is also a famous face in the Twenty20 leagues around the world, and in the Indian Premier League (IPL) itself, he has been a part of as many as five teams. 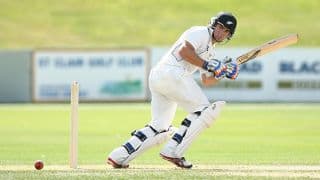