Rohit Sharma feels the status of football can improve in India.

Derek Abraham (DA): Are you a die-hard fan of any Indian or European football club? How do you manage to catch up the games during your busy schedule?

Rohit Sharma (RS): Yes, I am a huge fan of Real Madrid and follow the English Premier League (EPL). Real Madrid is by far my favourite because they play aggressive and smart football. It’s tough to catch up on all the games but I do try and follow as much as I can. Once I’m done with my gym, training and daily routine, I unwind with some football. It’s the best way to relax given our hectic schedule. And I play Fantasy League with my friends, so, that rivalry makes the games even more interesting.

DA: Who is your favourite player? Do you own his jersey?

RS: [Zinedine] Zidane and David Beckham are my favourites and are at the top of my list but [Fernando] Torres is a close third, I enjoy watching him play. Unfortunately, I don’t own any of their personal jerseys but team jerseys, of course!

DA: Please tell us about the football ‘rivalry’ in Team India? Who supports which club? Do you discuss football or watch the big games together?

RS: After cricket, the sport we follow in the team is football. Each one of us have personal favourites and support our own teams. So yes, there is a definite friendly rivalry. When the big games come around, we do watch them together. Most of the boys support Manchester United or Liverpool. But I beat them all because Real Madrid defeats them pretty often.

DA: You will be in England throughout the World Cup. It’s going to be a gruelling tour, but I am sure you will find time to watch the games on TV or in a pub with your teammates and other crazy fans..

RS: Absolutely! England is a challenge but like I said, football is the best way for me to unwind after a hectic day. So, I will try and catch whichever games I can. Specially, if Spain is playing. It is the World Cup after all and they are the defending champions and the team I’ve been supporting for a while now.

DA: Are you disappointed with the level/standard of football in our country? We are light years away from qualifying for the World Cup…

RS: I’m not totally clued in to the infrastructure of football in India but most of us know key names like Bhaichung [Bhutia] and Sunil Chettri and with the ISL [Indian Soccer League] making waves, I don’t see us being as far behind as most think. I, for one, would love to catch a game or two if our schedule permits and I’d like nothing more than to see India qualify for World Cup some day.

DA: With several European clubs opening academies in India, and with the IMG-Reliance-promoted Indian Super League set to begin this year, do you believe football could be the next big thing in our country?

RS: Yes, I do. It’s one of the leading sport in the world and we’re one of the greatest nations, so I see no reason why we can’t be up there competing with the rest. It’s a great initiative by Reliance and I think it will do wonders for the sport here in India and I wish them all the luck!

RS: [Andreas] Iniesta’s goal in the World Cup 2010 final. It was passion and sentiment all wrapped in one goal and it was unforgettable! 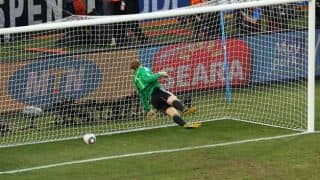