A World Cup final is the most important day in the players’ respective careers.

Though cricket and football have different magnitude in fan following, the World Cup final is the biggest day for the respective sportsmen. It is a day that can write their name in history or push them into infamy. As Argentina and Germany clash for the FIFA World Cup 2014, Nishad Pai Vaidya writes about the whole aura of a World Cup final.

Growing up, a young boy may dream of starring in his favourite sport at the highest level. He would walk into an arena full of roaring fans; taking the opponents head on, he would win the game for his country and be the undisputed hero. Those dreams all come down to that big day — for a team sport it had to be the World Cup final! On that day, heroes are made — who become a part of folklore in their nation’s sporting history. Those who fail may even risk infamy and go down as villains. As Argentina and Germany face off at the final of the FIFA World Cup 2014, one can only fathom the amount of pressure on the players.

This writer has been fortunate enough to attend two World Cup finals — albeit in cricket. Not to compare the magnitude of pressure or the following the two sports command, one can safely say that it is the most important day in the players’ respective careers. It is something they have worked for all their lives and dreamt about it. They carry their nation’s burden on the field, representing their sporting dreams. Sport has the power to bring people together, irrespective of whether it one where the ball if hit with a willow or sent into the back of a net.

Back in 2011, the Wankhede Stadium was the scene when a billion people watched their men lift the trophy. Sitting in the stands, the ebb and flow of the game captivated you, sent you into a nervous frenzy when India lost two early. You could sense the want to win it in each spectator in the stands that day. In front of those home fans, the Wankhede became a cauldron of pressure. Nothing else mattered to the spectators and the players that day. Victory was the only thing on everyone’s minds.

However, three years down the line, Sri Lanka had their moment in glory. Miles away from that setting in Mumbai, the two teams battled in the final of the ICC World T20 2014. If 2011 was about Sachin Tendulkar’s dream, this time, Kumar Sangakkara and Mahela Jayawardene were eyeing that elusive world glory. In a fitting finale, the two legends lifted the cup, with Sangakkara walking away with the Man of the Match award. The sorrows of 2007, 2009 and 2011 were all forgotten in that one moment.

Yet, on the other side of the coin, Yuvraj Singh became public enemy no 1. In 2011, he was the hero, the man whose all-round contributions made all the difference. Three years later, his painstaking innings took the momentum from India and proved costly. Some miscreants went on to stone his house. Though he has that World Cup in the bag, fans may still remember this forgettable day. That is how cruel the big stage can be.

As the two football giants clash, two nations may forget that it is just a game after all. For them, this is the moment of reckoning and everything is into oblivion. It may be Lionel Messi or Phillip Lahm holding the trophy. One man will be a hero and the other would hope he doesn’t become the villain. For the neutral, it is a game to enjoy and relive years down the line. For the men in the middle, it is their life! 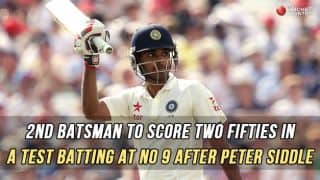 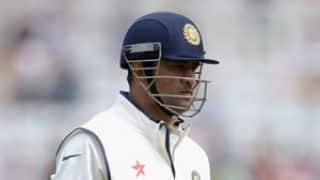 India tour of England 2014: MS Dhoni wants wickets with more life in them