It is common knowledge that USA and Canada played the first international cricket match of all time, back in 1844 at New York. Canada won the match by 23 runs. USA paid a visit the following year for the return match at Montreal; Canada won again, by 61 runs.

Fourteen years after the second tour, George Parr led a group of 12 Englishmen to North America, where they played against several teams of USA and Canada (and even a combined one). It was the first overseas tour by an English team.

In 1861-62, another squad toured Australia under HH Stephenson. Two years later there was another tour, under Parr (they also visited New Zealand), while WG Grace led the Englishmen to one ten years after Parr, in 1873-74.

Stephenson s batch consisted of one Charles Lawrence. In 1868, he brought over a group of Australian Aborigines to England the first tour by a group of cricketers from Down Under to the Mother Nation. These were also not Test matches. However, due to diligent efforts from some, especially Ian Chappell, the 14 cricketers of the batch were posthumously given Test caps numbered AUS1 to AUS14.

James Lillywhite Jr s 1876-77 men were, thus, the fourth English team to tour Australia. They played the state sides and had a small detour of New Zealand before returning to Australia. A day after their return they took on a side called Australian XI, consisting of only Victorians and New South Welshmen. They billed the match as The Great Combination Match.

How strong were the tourists? The Guardian wrote in 1929 that Lillywhite s eleven contained the cream of English professional cricket of the day; only Ephraim Lockwood was missing from the ranks of the grizzled band of simple-hearted cricketers. A contemporary Australasian report told a different story, calling the team by a long way the weakest side that have ever played in the colonies.

The match got underway at 1.05 PM on March 15, 1877 when Alfred Shaw bowled to Charles Bannerman after Dave Gregory won the toss against Lillywhite and opted to bat. It was the first ball bowled in Test cricket, which was the name under which it was classified.

The scoreline is more or less known, as are the statistics. Bannerman faced the first ball, scored the first run (a single) off the second ball of the Test, and scored the first fifty, hundred, and 150 all in the same innings. Allen Hill took the first wicket in Test cricket when he bowled Nat Thomson. Banner man was retired hurt for 165, scoring 67.3% of a team total of 245. His contribution remains a world record for a completed Test innings.

It is, however, not the oldest Test record that still stands. James Southerton of Surrey was 49 years 119 days old when he took field: he remains the oldest Test debutant.

Coming back to the match, England were bowled out for 196. Billy Midwinter, who would later play for England, then again for Australia, took 5 for 78 the first five-wicket haul in Test history. Australia were quickly bowled out for 104, but England, chasing 154, crashed to 108.

There was another Great Combination Match on the same tour that England won. However, though the cricket became popular in Australia, they received little coverage back home in England. That happened in 1878, when Fred Spofforth (6 for 4 and 4 for 16) bowled out MCC for 33 and 19 at Lord s. The tourists won in a single day.

The British media was left in awe. It was unanimously accepted that Anglo-Australian contests should get the importance they deserve in a country where counties were accepted as the greatest conceivable teams. The match had more to do with the development of international cricket than any other that has been played, Alan Gibson would comment many decades later.

Indeed, two years after the match (which was not given Test status), the first Test on English soil was played at The Oval. The legend of The Ashes was born two more years after that, at the same ground.

England and Australia kept touring each other throughout the 1880s, with England winning every series in the decade since the 1882 Oval Test. In 1885 the word test (albeit with a small t) was used for the first time to describe international matches. The capital T would be used for the first time in 1894-95, by the Pall Mall Gazette.

Then, in 1888-89, Major RG Warton (also spelled Wharton) took a team to South Africa. Warton had served the British Army in South Africa. He was a member of the Western Province Cricket Club during his stint.

The group consisted of six professionals and seven amateurs. Of these amateurs, Cameron Skinner was not really a cricketer but a comedian who was supposed to entertain the others. Nevertheless, he played 5 matches (and scored a single and 5 ducks).

They played twenty matches in all, but the general consensus was that the local teams were too weak. Only two matches consisted of sides representing All South Africa. These matches, at Port Elizabeth and Cape Town, were the first two Tests played by South Africa and the first two First-Class matches played in the country. Warton himself played only one match (the last of the tour), though he stood as umpire in both Tests.

South Africa did start the Test well on a matting wicket after Owen Dunell opted to bat. Despite being bowled out for 84 (Albert Rose-Innes faced the first ball for them) they reduced England to 103 for 9 before the tourists recovered to 148. But they failed the second time too, leaving England to chase only 66. These were achieved easily.

Three English cricketers, Charles Coventry (not to be confused with the Zimbabwean of the same name of a later era), Emile McMaster, and Basil Grieve, never played First-Class cricket outside these two Tests. Of them, Coventry played for Worcestershire when it was a Minor County (and didn t have First-Class status), but there is no record of Grieve or McMaster playing serious cricket after they graduated from Harrow.

The tour has a postscript. Sir Donald Currie, sponsor of the tour, donated a trophy: I propose to give a challenge cup to the team which excels the most against the visitors. The Currie Cup serves a different purpose these days; it is the trophy given to the winner of the South African domestic tournament.

The matches were not considered seriously back in England. Monty Bowden led England in the second Test after Aubrey Smith pulled out (Bowden remains the youngest England captain). After he passed away in 1892, the only reference of his cricket in South Africa was this: At the end of the season of 1888 he went out to South Africa, as a member of the team got up by Major Wharton, and there remained for the rest of his life. 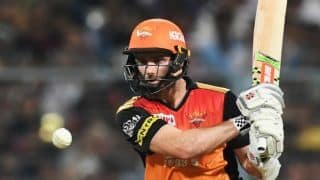