One of the best bowlers in domestic limited-overs circuit last season, Subodh Bhati with a base price of INR 10 lakhs hopes to be picked in this year's IPL auction.

Luck plays a factor in sports. Then, with time, one learns the role of perseverance. When I spoke to Delhi pacer Subodh Bhati after the Vijay Hazare Trophy Final last year, the young lad was beaming with confidence. He had set high hopes: he was eyeing an IPL, and perhaps even a national berth. He felt he had done his bit and the ball was in the selectors’ court.

Then came the IPL auction snub, followed by an injury at the start of the season and sporadic appearances for Delhi this season. The journey, viewed through rose-tinted glasses, now suddenly seemed full of obstacles. A year on, his confidence continues to remain high, but his disappointments are apparent. Bhati has his fingers crossed ahead of this year’s IPL auctions. He also hopes to make it to the Delhi squad for the 2016-17 Vijay Hazare Trophy — a tournament he went on to own a year back.

“If you love the game, you just continue playing it without expectations,” Bhati has by-hearted this advice that came from his ‘favourite’ Pravin Tambe. “He told this to me during one of the DY Patil T20 tournaments in Mumbai. He is the nicest person I have met in the cricket fraternity and remains a source of massive inspiration.”

Tambe symbolises passion and toil. He spent decades playing club cricket in Mumbai before taking the leap. He is one of those rare cricketers still active at 45. He played for Gujarat Lions (GL) in 2016. Bhati, meanwhile, still 26, is back to full fitness and doing what he loves — playing cricket. He hopes that the pendulum of fortune will swing his way some day.

Insecurities are the worst foes of middle-class commoners. Bhati, however, has probably seen the worst. He was getting picked for Delhi Under-23s and Under-25s but was not getting an opportunity to play. His frustration reached an extent where he had thought of giving up. “My coaches Tarik Sinha-Sir, Naresh Sharma-Sir and others insisted “kuch bhi ho khelna mat chhod (whatever it is, don’t quit playing)’.”

There is always a brighter side to everything, provided you want to see. His insecurities made Bhati enter an elite league of cricketers who completed their undergraduate degree before First-Class debut. He is a law graduate.

“Family pressure was practical and I continued my studies too. If I don’t make it big in cricket I need to ensure that I have a career to fall back to,” Bhati asserts.

Cricket is his first love. He is still young and is eyeing to replicate the heroics of previous season.

“Playing and performing is in my hands and I will do so. I have regained full fitness and believe me I have seen the worst, overcame them to be a First-Class cricketer. But when you see your peers edging past you, rather racing at a rapid pace, the expectations rise. Every player wants to play IPL, and I am very confident that given a chance I will succeed,” he remains honest and confident.

Sran and Bumrah, Gambhir and Dhoni

Bhati rose in reputation after the 2015-16 Vijay Hazare Trophy. Earlier that season he had made his First-Class debut and had claimed 18-6-41-1 and 5-2-10-1. His List A debut was more memorable: he wreaked havoc in the Baroda camp by claiming 4 for 17 from 6.5 overs. He got the prized scalp of Yusuf Pathan.

The tournament elevated Jasprit Bumrah and Barinder Sran to the national side. Sran’s 14 wickets at 27.42 at an economy of just over 6 saw him in the flight to Australia for the ODI series. Meanwhile, Bumrah’s five-for guided Gujarat to the title win in the grand finale at Bengaluru. Bumrah ended as the highest wicket-taker in the tournament and soon played in Australia. He has not looked back since and taken giant strides in limited-overs international cricket.

Bumrah’s feat in the final came against Bhati’s side. Bumrah ended the tournament with 21 wickets from 9 List A games at 16.09 and an economy of just over 4. Till the final Bhati and Bumrah’s numbers read:

At the big stage Bumrah surpassed Bhati’s tally. The latter was smacked for 43 from his 6 overs but he still managed to draw 2 wickets. Bhati still finished with an average of 14.44 and an economy rate of 3.52. Mind you, he bowls a lot at the death.

Bumrah made the giant leap to international cricket and Bhati was lost in oblivion. There was no IPL bid. He earned praises from Delhi Daredevils (DD) scouts, He was expecting his state captain Gautam Gambhir to pick him for Kolkata Knight Riders (KKR) or his boyhood hero MS Dhoni for Rising Pune Supergiants (RPS).

“Bowling to Dhoni-bhaiya was a challenge. He was hitting all over the park. At one time I had the feeling he would win it for Jharkhand but then this was a challenge. My strength is bowling in the right slots. I tried to prevent getting hit and mixed the pace,” recalls Bhati.

“A staff from our Delhi side later informed me that Dhoni-bhaiya was enquiring about me and he would bid for me in auctions.” This added to Bhati’s IPL optimism.

Even Bhati wonders. So do we. Bhati is a right-arm medium bowler who relies on variations. He is not express by any stretch. On his day he can even tonk the ball. And yet there were no bidders.

“The general consensus was I would get picked. I did not worry much ahead of the auctions. Gauti-bhaiya (Gambhir) kept on encouraging him throughout the season and praised me for my efforts. I thought he would pick me in auctions [for Kolkata Knight Riders]. Then Dhoni-bhaiya’s Rising Pune Supergiants was an option especially after his feedback after the Jharkhad game. They were also building a fresh side. There was a buzz from the DD camp as well. I have been with the Mumbai Indians’ development squad and had performed in the pre-IPL games. So I had my hopes pinned there as well. But…,” Bhati chuckles.

Despite the base price of INR 10 lakhs, and with a remarkable season under his belt, There was no bidder when auctioneer Richard Madley announced his name.

DD nabbed his teammate Pawan Negi for a whopping INR 8.5 crores but there were no takers for one of Delhi’s best performers that season. In the 2015-16 Syed Mushtaq Ali Trophy Bhati finished with 9 wickets from 9 games at 25.33. He has no qualms calling himself a ‘death-bowling specialist’; his economy rate of 6.70 that season definitely illustrates the same.

“I had not stepped out of home for almost three weeks after the last IPL auctions. Everyone would ask me, ‘which team are you playing for?’ After my limited-overs performance in 2015-16 I hoped to play for one of the franchises. More than money, my desire is to rub shoulders with the best,” Bhati recalled the heartbreaking 2016 auctions.

He had 3 wickets more than Negi that season and a significantly better economy rate. Not only did he make it to the national side but he also returned home a multi-millionaire after the auctions.

Goa Corporate League 2016. The final was the clash between Reliance and ONGC. Reliance needed 9 from the final over. Our ‘death-bowling specialist’ was entrusted with the job. A run came off the first ball. Akshar Patel, now on strike, hammered a six followed by a single. Bhati went on to bowl three dots to secure a tie.

Amit Sharma, a national junior selector till last month, was the ONGC coach. Bhati’s show pleased him so much that he wondered why the youngster did not play IPL.

“You are the most unlucky player,” Sharma remarked.

Bhati suffered a groin strain during the JP Atray tournament in September 2016. After regaining fitness he was drafted in the Delhi side for the Ranji Trophy game against Jharkhand.

Unmukt Chand was leading the side as Gambhir was on national duty against England. Jharkhand belted 493 courtesy Ishan Kishan’s 273. Bhati eventually dismissed him.

“Delhi team started with the tradition of handing away awards in the dressing room for individual brilliances. In that match, I was awarded as the best bowler in the side for clinching most wickets and important ones (Ishan Kishan, Saurabh Tiwary and Pratyush Singh). However after that game I was benched and did not play any further part in the side’s campaign,” Bhati adds.

Bhati grew up in Modinagar, a city in Ghaziabad district and played mohallah cricket idolising Ashish Nehra. It was there that he picked up the streetsmart attributes of bowling in slots. He considers himself extremely lucky to get Nehra’s guidance for Delhi’s Sonnet Club.

“Big players have played for my club. I have been lucky enough to get guidance from Ashish-bhaiya, my role model. His longevity is a testimony in itself. I hope I can follow the same. I feel good when guys like Unmukt Chand and Pradeep Sangwan constantly encourage me,” says Bhati.

Another Sonnet cricketer who is grabbing headlines at the moment is 19-year-old sensation Rishabh Pant. Ahead of the Vijay Hazare Trophy to be played later this month, Pant has been appointed Delhi’s captain in place of Gambhir.

Pant and Bhati go a long way back. It is a well-known fact that Pant was asked to leave Rajasthan for being an ‘outsider’. Bhati had to face the same. They both returned to Sonnet in Delhi.

“I don’t remember him captaining. But if the authorities have placed trust on him, he must be good. I feel extremely delighted for him. He is like my younger brother. I know him from my U-19 days, when he was in U-14, and was so good that also played in U-16,” he beams with delight with the mention of the new Delhi skipper.

“Usually if you are an aggressive batsman then coaches interfere in your style but no one does that when Pant bats because he gets runs. I feel lucky that we play for the same club. No bowler enjoys bowling to him,” Bhati further adds about Pant’s reputation.

Pant finished 2016-17 Ranji Trophy with 972 runs at 81 at a strike rate of 107.28. He slammed a triple-ton, the fastest First-Class hundred on Indian soil and kept wickets too. Riding on his performances, he got an India cap in the Bengaluru T20I against England.

“He is superstar otherwise and we will hear a lot of him in the coming days. We had a video call the day he was picked for India. He was playing the DY Patil tournament and was overjoyed. I am hoping to be picked for the Vijay Hazare Trophy and play under him in the Delhi side. It should be exciting,” Bhati signs off.

The IPL auction is on Monday, February 20. Bhati is among the 351 players in the auction list and has once again set a base price for himself at INR 10 lakhs. 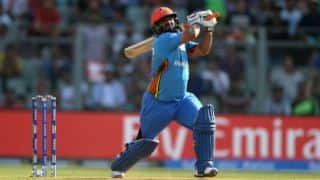 India A vs Australia tour match: David Warner vs Shahbaz Nadeem, Rishabh Pant vs Josh Hazlewood and other key battles