Keith Boyce, Clarke, Holford, Daniel and Holder were legends of the game.

The ongoing Test match between West Indies and India at Bridgetown, Barbados, rekindled memories of a bygone era when the Barbados team boasted a galaxy of greats that was worthy enough to play Test cricket on its own strength. In fact, some even believed that the then Barbados team was better than many of the Test playing nations of that time.

While there are many players from Barbados who made a mark for themselves at an international level, there are also quite a few quality players who showed the glimpse of their sparkling talent but never quite rose to the expected heights.

1. David Holford: He was thoughtful and astute and is often remembered as the best captain West Indies never had. He was renowned for his cricketing acumen which was exemplified when he later became chairman of selectors. His finest hour came when he added 274 runs along with his cousin Gary Sobers against England at Lord’s in 1966 to save the Test for West Indies. He was touted as the next big thing, but in 1968 he suffered from pleurisy and was never the same player again. Though, in 1976 playing at his home ground, he sliced through the Indian batting and picked up a five-wicket haul to help West Indies to a resounding victory.

2. Wayne Daniel: He showed his hostility in his very first Test – against India – in 1976 where he revelled on a treacherous Sabina Park track. This was the controversial match where Indian skipper Bishan Singh Bedi effected an unexpected declaration in the first innings to save his batsmen from sustaining physical harm from a hostile West Indies attack powered by Michael Holding.

Daniel terrorised the English batsmen on the tour in 1976 along with Holding but soon lost favour with the selectors after joining Kerry Packer’s breakaway World Series Cricket (WSC). With the arrival of Malcolm Marshall and Joel Garner, his chances of staying in the West Indies side shrunk. He carved out a niche for himself playing for Middlesex in the county cricket and was a potent force behind Mike Brearley’s success as a captain. He was one of the most popular and successful overseas players in the English county during his time. He later donned the mantle of a coach and helped many young fast bowlers to nurture their talent.

3. Keith Boyce: He was the ultimate under-achiever at the international level. Boyce was an audacious and combative fast bowler, who could also bat with the force of a hurricane. He got limited chances to play for West Indies team, though he forged a successful career with Essex during 1970s. He performed exceptionally against England in their own backyard in 1973, when he hauled 19 wickets in three Tests, but was later jettisoned after West Indies got a 1-5 pasting from Australia in 1975-76. Young guns like Malcolm Marshall and Joel Garner were drafted in and Boyce never played a Test match again. In his penultimate Test, at Adelaide, he was left stranded on 95 and was destined never to make a Test century. He was a brilliant fielder and had the flattest and hardest throw. He died on October 11, 1996 on his 53rd birthday.

4. Vanburn Holder: He was yet another player from an era of West Indies’ dominance. Unlike most of his counterparts, he relied more on accuracy than the raw pace, but could produce bouts of fearsome bowling as India discovered in 1976 at Sabina Park, Jamaica. His career was curtailed due to an influx of quality pacemen in the West Indies team. He went on the 1978-79 tour of India when West Indies was dogged by the absence of its regular players. The Kanpur Test in that series turned out to be his swansong. He was a prolific bowler in domestic cricket and after retirement became a first-class umpire.

5. Sylvester Clarke: The most famous among all others who featuring in this list and arguably, the meanest and most ferocious fast bowler cricket has ever seen. Viv Richards claimed Clarke was the only bowler he did not feel comfortable batting against; David Gower stated that Clarke was by far the fastest man he ever faced. He split Graham Gooch’s helmet into two while playing in a county match.

During his tour to India, in absence of key players who were playing Packer’s WSC, he captured 21 scalps in five Test matches – the highest from his team – and dismissed the great Sunil Gavaskar five times.

His fleeting international career was littered with spate of controversies, the most serious being when he hurled a brick into the crowd that injured a young man seriously. The incident happened in Multan in 1980 during West Indies’ tour of Pakistan. He was irked by the constant jeering of crowd and retaliated. His action was widely condemned and he played only one more Test match. He later went to the South Africa rebel tour and was banned by West Indies Cricket Board. 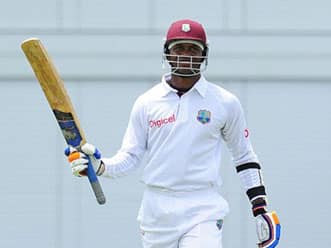 I want to be consistent: Samuels