He was 37, had not played Test cricket for three years and would not play for England ever again. But, he was still quite the Fiery Fred.

July 28, 1968. Trent Bridge had always been full of cricketing history, but never had it witnessed such a sight. Arunabha Sengupta writes about the day when Fred Trueman demonstrated his softer side at the historic ground.

He was 37, had not played Test cricket for three years and would not play for England ever again. But, he was still quite the Fiery Fred.

Fred Trueman was in his last full season of First-Class cricket, but as always he was full of fire. “If this is over t’hill, it’s great coming down t’other side,” he is supposed to have said.

Indeed, it had been a splendid summer for the ageing fast bowling great. He had started out early in May, blasting out five Cambridge University batsmen for just 18. He never quite liked University undergrads pretending to be First-Class cricketers. In June, he hit mid-season form, with 5 for 45 and 3 for 17 in a victory against the old Roses rivals. This was followed by destroying Leicestershire in the second innings with 6 for 20.

And finally there was the grand cherry on the cake, the success to savour forever. Bill Lawry’s touring Australians came up to Bramall Lane. Trueman relished the occasion and captured three wickets in each innings. Ray Illingworth took eight in the match and hit 69, Geoff Boycott 86, and, when not tearing in, the old fast bowler plucked out catches off the thin air. The old foes were crushed by an innings. Trueman rejoiced.

But, there were signs and symptoms that Trueman had mellowed. Nowhere was it more apparent than at Trent Bridge on July 28.

The previous morning, he had started the match by spread-eagling the stumps of Norman Hill. With Tony Nicholson getting the ball to move at the other end, Nottinghamshire had started disastrously, reduced to 49 for 4.

And then their captain had entered the fray, the overseas recruit, a man known to the world as Garfield Sobers. He had blazed away, counterattacking in majestic style on his way to 72 before Trueman had induced an airy stroke in the direction of Don Wilson. In the end, the fast man’s 3 for 55 had read respectable enough, but he was not happy that the hosts had got as many as 238.

The Yorkshire response was built around Phil Sharpe. With forceful cover-drives and delicate late-cuts, he raced to his third hundred in a fortnight. When he finished unbeaten on 143, Brian Close calling his men in with a lead of 7 runs, the 8,000-strong Trent Bridge crowd were in agreement with the many thousands of Yorkshiremen who thought Sharpe should have been at Headingley instead, taking on the Australian bowling in the fourth Test.

During the last half hour of the day, Trueman wiped the sweat off his brow and charged in at Brian Bolus and Norman Hill, trying his darnedest to get a breakthrough.

The attempts were unsuccessful, and the frustration ultimately got to him. In the last over of the day the ball thudded into the pad of Bolus and up went old Fred, appealing vociferously. Umpire Fred Jakeman said no. And Trueman’s face wrinkled in a furious scowl as he wore loudly on his way back to his bowling mark.

Jakeman frowned and walked down the pitch towards the slips where stood Brian Close. Perhaps the captain was the only man who could talk to Trueman in that mood. Words were exchanged, and Trueman nodded while going back to bowl. Jakeman resumed his position behind the stumps.

After another delivery, as Trueman walked back past him, Jakeman turned to have a word with the fast man. And the hard-bitten professional showed the world that he had mellowed. Far from being churlish, Trueman held Jakeman and kissed him.

Writing for Daily Express, Pat Gibson observed, “Trent Bridge is full of memories, but it has never seen a sight like this … the famed fire of Fred was momentarily doused as he gave the umpire a kiss.”

With such spirit of peace and harmony on display, it is little wonder that the match ended in a draw. 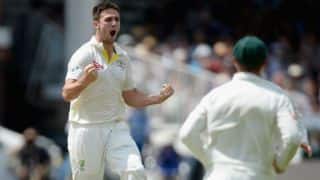 Cally Barlow: Eddie will be smiling down on the new generation of Bangladesh cricket