Roughly a year back, Kumar lost his mother, was out of Delhi's plan for the domestic season and at 27, his future seemed to be in doldrums.

Milind Kumar was the highest run-getter in Ranji Trophy 2018-19, has an IPL contract with Royal Challengers Bangalore, is part of the Duleep Trophy 2019-20 squad and is set to play for Tripura as an outstation player in the upcoming season.

Roughly a year back, Kumar lost his mother, was out of Delhi’s plan for the domestic season and at 27, his future seemed to be in doldrums.

“Last year, I had many set backs in life, those were the worst days of my life,” Kumar tells CricketCountry.com. “What helped me through it was, I thought this is the baddest thing that can happen to a player, nothing can be worse. I told myself that happy days are coming, just concentrate on what you are doing, I planned my practice session and training and I used to spent a lot of time in the nets.”

He was kept on Delhi’s standby list for the Vijay Hazare Trophy 2018-19 and was told he would get a look in after three matches, which never happened. Without a team to play and with most teams acquiring outstation players – especially the nine new entrants – Kumar reached out to Sikkim, the only team to field all local players for the 50-over tournament. He was signed within two weeks for Ranji and Syed Mushtaq Ali. He scored 261, 224, 133 in the first three Ranji matches and went on to record a total of 1331 runs at 121.00.

All of a sudden, Kumar was in the limelight and was being talked about. Fast forward eight months, Kumar is content with what he has been able to achieve. He sees the light at the end of the tunnel – those happy days.

“Obviously, I am the highest rug-getter, was in an IPL team, part of Duleep Trophy and am doing my learning and yes, the days are improving for sure, day by day,” he says.

He has parted ways with Sikkim after just one season, seeking better returns for his performances this year.

“Going to Sikkim last year was not my plan at all. I wanted to stick to Delhi, but circumstances changed and I was forced to move. Rather sitting at home idle, I choose to play for the state. I did not have an option so I made the move. This year, I had enough time to sit and decide and I was getting a good place to play, better place to play and I made the choice,” says Kumar.

While many would argue that for Kumar, coming from Delhi, playing in the Plate division would have been a piece of cake – but from from it.

“To be honest, it was very tough for me, moving out of Delhi playing with a new team,” he says, adding, “It was very different for me. I used to come out to bat with team on 12/3, 11/5; but I realised I cannot be thinking about it over and over again and concentrated on my batting. My goal was to spend more time on the wicket and make as much runs as possible.”

The 1331 runs has now set the benchmark for Kumar to replicate, that too to in a tougher group against tougher opponents, but the 28-year-old is undaunted by the task, in fact as is the modern day philosophy for most players – he is going to trust his processes.

“I never thought i will make those many runs, I just concentrated on my batting, I had my good off season and spent a lot of time in the nets and that paid off.

“I have not set any specific goals or target for the season. Last time also i did not set any goals, batting well was the main priority. I converted my fifties to hundred and hundreds to 200s, The idea is to get a good start and I want to convert it in to a big score, that was it. I want to follow same process, what I used to train, basically how I used to think before the game, how I plan my innings, I will stick to that,” he says.

An unexpected call to the Duleep Trophy squad also gives him hope that his runs, even though that came in Plate division, meant something.

“I was not expecting the a call for Duleep Trophy, but it was surely motivating (to be in the scheme of things), that I did my hardwork and that paid off,” says Kumar, but he also feels a bit disappointed to not have got a game. “We are here to make runs, we cant handle the selection process. I am in Duleep Trophy, but I have not got a game, but that’s ok – may goal is make runs rather than think about selection matters.”

Being part of the IPL alongside his idol Virat Kohli was also a huge fillip for Kumar.

“Sharing the dressing room with legends like AB (de Villiers), Virat bhaiya, Gary (Kirsten) sir, Ashish (Nehra) bhaiya, obviously boost to your confidence. To think I was sitting ideal at home, thinking will I get the chance to play in the Ranji Trophy, and next thing you are picked up by an IPL team, it was a major boost for me

“We (with Kohli) had couple of sessions and he helped me in the nets, and talking to them and sharing the dressing room and being with them helps you learn many things. it is a learning process and am glad I was a part of RCB last season,” says Kumar, who was brought for INR 20 Lakh in the auction.

Kumar now has moved on from that tough phase an year back and doesn’t hold any ill feelings against DDCA. Interestingly, last year, alongside Kumar, Pawan Suyal and Rajat Bhatia too had moved away from Delhi as outstation players, while this year, Unmukt Chand has decided to leave Delhi for Uttarakhand.

“Delhi has given me a lot, I was there for eight years, it was good period and learned a lot. Yes, if you do not perform you are under the radar. But with me, I had two bad games and my position was questioned. But that’s ok, it is part and parcel of the game, you have to move on and not dwell in the past. You cannot move forward keeping the negative things in your mind,” he adds. 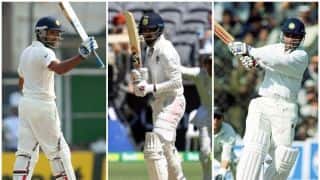 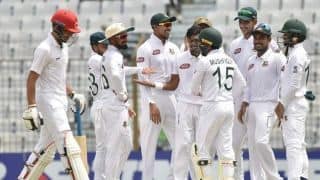 One-off Test: Taijul Islam, Mahmudullah reduce Afghanistan to 77/3 at lunch on Day one