Indian cricket has had a mysterious connection with the number 183. What is it?

Indian cricket has had a mysterious connection with the number 183. Humjee Break-Sheikh takes a look at how the number has turned up time and again in the history of the sport.

Old-timers (and this is serious old-timers I am talking about, not me) swear by the number 183. In fact, the number had popped into prominence in 1(9)83 when I was almost six-year old, and people shouting a lot on the streets remain my first memory associated with the sport.

My parents remember 183 fondly, as do a lot of their mates. The number changed the face of Indian cricket for good: that single World Cup modified Indian cricket to such an extent that India and Pakistan hosted the World Cup four years later, ODIs dominated the sport in India in 1990, and India took over ICC in just over a decade.

The number 183 emerged again during the 1999 World Cup: a young left-hander from Kolkata hit a group of hapless Sri Lankans (Muttiah Muralitharan) all over Taunton for 17 fours and seven sixes to reach the magic figure with another man from Bangalore in tow. Though Sourav Ganguly had led India before, he was appointed full-time captain of India next year.

Then came another long-haired man from Ranchi, who helped chase down 299 with 23 balls to spare. He scored an unbeaten 183 with 15 fours and ten sixes at Jaipur; in two years’ time MS Dhoni-led India to a World Twenty20 title, and by next year he was leading India in all formats of the sport. There have been social media bloodbaths regarding who of the two is the greater captain. It was then the highest score for anyone batting second in an ODI.

As Dhoni went through a lot of ups and downs and hairdos over the years, a boy from Delhi who had already been labelled as rash and haughty, decided to leave a stamp on Sachin Tendulkar’s last ODI. Virat Kohli tore into the Pakistan attack at Mirpur and 330 was overhauled with 13 balls in hand. Kohli scored 183 with 22 fours and a six in that Asia Cup, and was appointed full-time captain of India for the next Asia Cup, albeit in Dhoni’s absence. 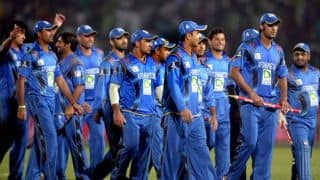