Andrew Ward described it as ‘a game finishing in such poor light that conditions were more favourable to live bats than dead ones’.

August 27, 1889. ‘A game finishing in such poor light that conditions were more favourable to live bats than dead ones’. Arunabha Sengupta recalls the day Surrey batted on in absolute darkness and gas lamps were lit in the pavilion for the benefit of the players.

Andrew Ward described it as ‘a game finishing in such poor light that conditions were more favourable to live bats than dead ones’.

It was the last match of the season for both the sides. Surrey were near the top of the table with 9 wins and a draw from 13 matches. They needed a win to catch up with Lancashire and hope that Kent beat Nottinghamshire in the final match. And they were determined to stay in the race. So much so that they did not hesitate to take on fast bowling in pitch-black darkness.

Lord Hawke had won the toss at The Oval and Yorkshire had batted first on the previous day. On a slowish wicket, the fast-paced bowling of John Beaumont had torn through the innings of the visiting Northern players. With the great George Lohmann, John Sharpe and Walter Read lending support, the Yorkshiremen had been reduced to 71 for 7.

Saul Wade and Robert Moorhouse had rallied, but the total had amounted to just 138. In the midst of the eventful innings, the match had virtually been reduced to ten-a-side. Lord Hawke had received a blow to the hand that would render him unfit for batting and fielding after his short innings. And when he skied Lohmann to long on, Maurice Read injured his hand while taking the catch. Thus, Surrey was for all intents and purposes without the services of one of their top batsmen for the match.

In the event, Maurice Read did walk in to bat. Bobby Peel’s left arm spin, coupled with Lees Whitehead’s fast bowling, had skittled 9 Surrey batsmen for 105. The injured man had walked in to bat one handed. He had remained not out on 4, as the hosts had succumbed for 114. Going in to bat again, Yorkshire had ended the day at six without loss.

A victory in the dark

The following morning the visitors lost two wickets quickly, including that of the experienced George Ulyett. However, Louis Hall and Frederick Lee overcame a shaky start to score fast and confidently. Soon, they were almost 100 in front with 8 wickets in hand when the ball was tossed to the hitherto insipid Lohmann. Wickets had tumbled after that, the eventual 141 setting Surrey a target of 166.

The second Surrey innings began at 3 PM on Tuesday, with three and a quarter hours remaining in the day.

The start was poor. The dependable Bobby Abel was caught at mid-off at 17, captain John Shuter bowled at 20; Walter Read and George Lohmann struggled against Peel and Wainwright before both fell to the former.

Kingsmill Key, the fluent amateur batsman, struck the ball well and forged a fine partnership with the dependable professional Robert Henderson. 34 good runs were added before the gentleman, hurrying across for one to the leg and turning ill-advisedly for the second was thrown out. It was a nifty return by Whitehead who had run across from short-slip.

Wainwright then accounted for Billy Lockwood and wicketkeeper Harry Wood, and Surrey was now 105 for 7. With Maurice Read still suffering from the broken hand, they were virtually eight down.

With 59 to get, Sharpe put his head down and batted with sound judgement, helping Henderson along.  When the wise old Ulyett bowled the lower order batsman for 14, 31 runs had been added. 136 for 8, and Beaumont, virtually the last man, trudged to the wicket.

By now the light was atrocious. The tail-ender went up to umpire Bob Thoms, and supposedly said, “Bothered if I can see the ball.” Well, the first word was decidedly different to the one in print. The inimitable umpire responded, “If you can’t see ’em, you’d better feel for ’em.”

Beaumont flailed at a few balls, waging on chance than eyesight and technique. But somehow he survived those moments of hazardous swings of fate, and became keen on saving his stumps.

The clock showed 6.15, the scheduled close of the game. 25 remained to be scored, one wicket to be taken. Maurice Read would not bat. And after conferring, the players decided to play another half hour and end it that evening to spare the trouble of getting there on the following morning. Henderson at 40 was batting with great confidence. Shuter asked his batsmen if they wanted to continue. And ‘aye’ was the answer.

The ball was turning a bit too much to hit the stumps. There was hardly a chance for Beaumont to edge them without seeing them. Hence, fast bowlers were recalled. Ulyett and Whitehead ran in. Beaumont’s hands, gloveless and uncertain, were struck again and again. But he held on. Henderson kept the scoreboard ticking with ones and twos.

Now 11 were needed. The lamps had been lit on the streets. As Whitehead started a fresh over, lamps in the pavilion were turned on, with the dim hope of helping the batsmen. Henderson turned a ball to leg and as the fielders hared after something that seemed like a ball in the darkness, the batsmen ran three.

Many of the spectators could not even see what was going on. The events were relayed to them by their mates. Singles were taken. The crowd, unable to see the ball or even the men, crept closer. At 6.45, the agreed finishing time was reached. The game went on.

By now everything hung on the edge of a knife, including perhaps the lives of the batsmen and fielders. Every stroke had some of the brave men cowering, expecting a knock on the head. In the midst of it all, singles were run and the score reached 162.

Ulyett ran in and pitched short and Henderson cut him away for four. Some of the crowd saw it happen. Some were made aware by the gradually growing round of cheering. Surrey had won. The batsmen ran towards the gas lit pavilion, with Beaumont finally getting to see the extent of damage to his blood covered hands. But, he had held his end up and won the match for his team.

Henderson had batted two-and-three-quarter hours, the last thirty minutes or so in total darkness, for his 59. It was one of the most amazing knocks ever played.

The pavilion clock showed 7 in the evening when the match ended. However, there was no Daylight Savings Time those days. It would have been 8 PM on a late August evening when the winning hit was made.

Three days later, at Beckenham, Fred Martin’s 11 wickets gave Kent a four-wicket win over Nottinghamshire. That meant Surrey, Lancashire and Nottinghamshire shared the honours for the County Championships that year. 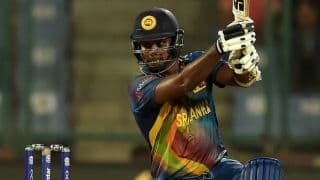