Gautam Gambhir for England tour: Is it a wise decision?

Gautam Gambhir for England tour: Is it a wise decision?

Gautam Gambhir was picked as the third opener in India's Test side.

Gautam Gambhir’s selection as the third opener for the tour of England is somewhat difficult to justify, writes Arunabha Sengupta.

With India gearing up for their first five-Test series since 2002, it was but natural that the selection decisions would involve many complex factors. The pitch was queered even further by the ominous 4-0 whitewash during the team’s last visit to England.

One of the telling questions was obviously the choice of the openers – always of paramount importance during an overseas series. With Shikhar Dhawan and Murali Vijay impressive only in disjoint patches over the last couple of tours, the additional cushion of a third opener was expected.

However, given that the choice was Gautam Gambhir leaves certain lingering doubts about the parameters considered for making this decision. Was it really a balanced outcome of objective analysis keeping the five-day format in mind? Or was it a combination of availability heuristic, the illusion of experience and too much unfortunate importance given to the Indian Premier League (IPL)?

One understands that the Indian team is incredibly low on the experience front. Among the others selected, only captain MS Dhoni and Ishant Sharma have played Tests in England. The immense experience of the 32-year-old Gambhir can arguably counterbalance this shortcoming, especially with his exposure to English conditions in 2011.

However, if one digs a bit deeper, Gambhir’s previous tour had been nothing short of a horrid nightmare. He had more or less sleepwalked through three Tests, scoring 102 runs at 17.00 with a highest of 38. It had been one of the most pathetic slopes of his steep downfall since February 2010 – which has seen the once prolific batsman score at 29.32 in his last 25 Tests. It stretches logic somewhat to argue that his experience of this pitiable tour will act as a supporting pillar of wisdom for the Indian cause.

On the positive side, he did turn out for Essex last summer, making his county stint a rarity among the modern Indian players. However, those five outings took place towards the end of the season, after the sound and fury of the IPL had died down. Apart from a hundred against a second rate Gloucestershire side, he did not cross fifty in any of his other six innings, and even the century could not take his average past a mediocre 34.14.

Of course, for any discard from the international arena, the conventional way back into reckoning is to score runs in domestic cricket. Which begs the question – has Gambhir done enough to justify his recall to the side?

If we look at the Indian First-Class records of the last two seasons, we find Gambhir securely placed in the very middle of the table of performers. His form has not been bad – he has scored 743 runs at 46 this season. However, it has been far from exceptional. There have been plenty of others who have performed better – 15 with more runs, 14 of them at a higher average.This includes other opening batsmen–generously talented and considerably younger.

The Delhi opener did score an impressive 153 against Haryana on a greenish Roshnara Club wicket, but that was back in November last year. His only other hundred the last season came a month before the Roshnara knock, 123 against a shambolic West Indies A attack that was flogged for 306 by Cheteshwar Pujara in the same innings. After his century against Haryana, Gambhir crossed 50 only once in the remaining nine innings in the longer format. The results are not really flattering.

Among opening batsmen, Mahrashtra’s Harshad Khadiwale and Karnataka’s young Lokesh Rahul have considerably and consistently outscored him in both the 2012-13 and 2013-14 seasons. As far as other batsmen are concerned, men like Manish Pandey, Baba Aparajith and Kedar Jadhav have been far more impressive in the First-Class field.

This raises another question. How much of Gambhir’s selection had to do with his First-Class performances? Or was it due to the faulty illusion of experience along with the immediate recall of his name given all the bells and whistles surrounding Kolkata Knight Riders? After all IPL has negated the age-old proverb of there being no shortcut to success. For a month and a half every year, the modern cricketers have opportunities wormhole their way to instant fame and fortune.

Gambhir started IPL 2014in the worst possible way, with three consecutive ducks. However, he did hit a brief purple patch scoring three fifties in successive matches as KKR continued on their impressive run in the tournament. As befits the instant format and its following, a smattering of success in the bashball matches evoke rich sentiments from fans underlining ‘permanent class’, ‘back to his best’ and all such curious conclusions. To cite the most recent example, the 122 by Virender Sehwag against the Chennai Super Kings in the Qualifier did enough to almost completely shroud his meagre returns of 279 runs at 19.92 in First-Class cricket this season.

One certainly hopes that the national selectors are not victims of this syndrome. Perhaps Gambhir has really been chosen based on sound cricketing judgement and we will be eating our words with considerable relish during the English summer. 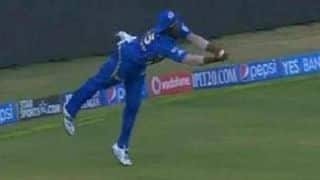