Sport can be a hard taskmaster. It requires extraordinary commitment and, upon failure to comply with its demands, has no hesitation in leaving behind an individual — regardless of his or her history — in the lurch. Neglect its curriculum and the plummet is unbelievably swift. This is true of any genre. Whether you’re a heptathlon athlete, a tennis player or a cricketer, the rule etched is the same for all: take the game for granted at your own peril. 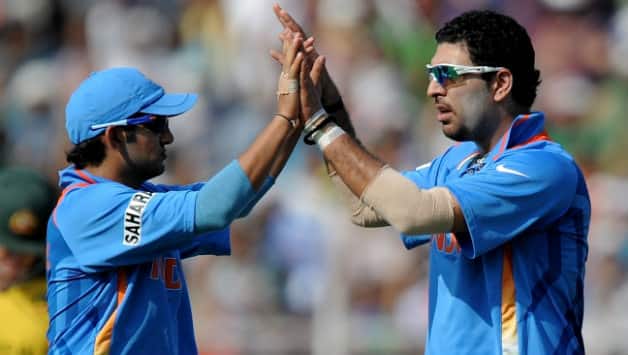 Gautam Gambhir (left) and Yuvraj Singh were the chief architects of India’s 2011 World Cup win, but have been out of the national side in recent times © AFP

Sport can be a hard taskmaster. It requires extraordinary commitment and, upon failure to comply with its demands, has no hesitation in leaving behind an individual — regardless of his or her history — in the lurch. Neglect its curriculum and the plummet is unbelievably swift. This is true of any genre. Whether you’re a heptathlon athlete, a tennis player or a cricketer, the rule etched is the same for all: take the game for granted at your own peril.

To state an example, closer to home, a little over two years ago, Gautam Gambhir, Yuvraj Singh and Zaheer Khan were the chief architects of India’s World Cup triumph. Gambhir played one of the grittiest knocks in the final, Yuvraj averaged over 90 and Zaheer was the joint-highest wicket-taker in the tournament. The three, alongside a few of their peers, were touted to shoulder the team for a few more years; perhaps even till the next World Cup in Australia in 2015. They all looked unassailable. But sport, like its rewards, guarantees one other thing — uncertainty. Yuvraj was shot down by a rare germ cell cancer, Zaheer hobbled off at Lord’s in the July of 2011 clutching his hamstring and Gambhir couldn’t fully deliver his duties as an opener. In due course of time, they became discards.

What ensued with Yuvraj and Zaheer was certainly unfortunate. The likes of Gambhir, Virender Sehwag and Harbhajan Singh, however, had the opportunity to cling on to their spots. They did what they could, but alas, it clearly wasn’t enough. Moreover, youngsters in the domestic arena kept churning out eye-catching performances and this didn’t help their cause either. Despite all that’s wrong with Indian cricket off the field, the on-field decisions have thankfully been sane. The selectors, rightly, infused young blood and haven’t turned back ever since.

The Shikhar Dhawans, Ravindra Jadejas and Bhuvneshwar Kumars fully justified the faith placed in them by the selectors, thwacking Australia at home before winning the ICC Champions Trophy 2013 in England. Prior to these victories, much hullabaloo was made of Yuvraj’s exclusion and some voices from the cricketing fraternity also chipped in with their two cents. Agreed, return to the mainstream after an intense battle with an opponent as unforgiving as cancer was heroic, but Yuvraj was given a decent run — a fact that was conveniently ignored when the argument was put forth. He scored just 160 runs from his last eight ODIs upon return to the international fold, which by no means, if picked, could have justified his spot, especially when there were other worthy candidates in contention.

The experienced sect of the side was soon made to realise that they needed to contribute more. Dishing out performances that earlier allowed them to hold on to their spots was no longer deemed enough. Past reputation too wasn’t given a lot of weightage. While some seasoned campaigners fell by the wayside owing to this, a few — namely Yuvraj, Zaheer and Gambhir — decided to tackle their conundrums head on. The choices they’ve made are sure to warm the hearts of the Indian fans.

Yuvraj and Zaheer headed to Brive-la-Gaillarde, a French commune, in an attempt to return to peak fitness. The trip was voluntary and, under trainer Tim Exeter, the duo got busy shedding the unwanted pounds off. The desperation to turn back the clock is praiseworthy, partly because one feels they can still contribute significantly to this current Indian unit. They belong to an era where they assimilated the importance of fighting till the last breath and are following the same modus operandi in their attempt to stage a comeback. Gambhir’s decision to head to Essex to fine-tune his game, too, especially as the contest for the opener’s slot in the national team tightens, is sure to please many. In short, the three have opted to head back to the drawing board, a decision which could prove to be invaluable in the long run.

This juncture the three Indian cricketers find themselves in is reminiscent of former tennis stalwart Andre Agassi’s struggles in the year 1997. After having topped the Association of Tennis Professionals (ATP) charts by winning the Australian Open, US Open and Wimbledon by 1995, Agassi placed his game on the backburner and soon approached nadir, within two years to be precise. From being the top seed, he was ranked No 141 in the world by 1997. It was then he decided to relegate himself and start right from the scratch. He went back to the drawing board. Amidst heckling from the crowd and despite being a subject of much ridicule, he worked relentlessly at Challenger tours (tennis’ version of domestic games) to polish his skills and dust off the rust.

In 1998, Agassi returned to the big stage and won five titles before jumping to the sixth spot in the rankings. Incredibly, it was the highest jump into the top 10 made by any player during a calendar year. In 1999, he won the only title that eluded him in the form of French Open. He became only the second player after Rod Laver, to complete a career Grand Slam (winning all four majors) in the Open Era. For Agassi, reverting to the basic level was his first step on the road all the way back to No 1. That is how the champion in him saw it.

By attempting to hone their basics, the trio of Yuvraj, Zaheer and Gambhir have made their intentions clear. Whether they return to being No 1 remains to be seen, but one must take nothing away from their efforts. Like Jackie Joyner-Kersee, one of America’s greatest athletes stated, age is no barrier. It’s a limitation you put on your mind. And it’s fair to say they’ve demonstrated their mental toughness. The youngsters in the side cannot afford to step off the gas; they can be sure the discarded seniors will soon be breathing down their necks.

For Indian cricket, though, the competition for spots is a boon. When you’ve got the best of youth and experience vying for a berth in the side, you can be sure the sailing is smooth, at least for the time being.

Pakistan must not get complacent against Zimbabwe, warns Dav Whatmore