Geoff Hurst never made it back for the first side, but continued to play for the Second XI till 1964.

Wembley, 1966. England have managed to reach the FIFA World Cup final for the first time. The huge amphitheatre resembled a cauldron with thousands chanting and cheering for the home country. West Germany, however, went one-up in the 12th minute: neither Gordon Banks nor Jackie Charlton could stop the shot from Helmut Haller.

Seven minutes later Bobby Moore sent a free-kick near the German penalty box, and Geoff Hurst sent a header into the nets. After a pitched battle, the match seemed to head into extra-time when Alan Ball passed one to Hurst. The resultant shot deflected, but came to Martin Peters, who put England ahead with a punch from an eight-yard distance.

West Germany clawed their way back in and obtained a free-kick as late as in the 89th minute. Lothar Emmerich’s shot hit George Cohen, standing in the wall; amidst much pandemonium inside the English penalty box Wolfgang Weber equalised, pushing the match into extra-time.

Eleven minutes into the extra-time, Hurst got a ball from Ball (if you mind the pun) and managed to hit the crossbar. The ball bounced on the line (according to many) before it cleared. The referee, Gottfried Dienst (from Switzerland) and the linesman, Tofiq Bahramov (from Azerbaijan, then USSR) discussed using sign-language — they did not speak a common language — and awarded a goal to England. It perhaps remains the most controversial moment in a World Cup final.

With West Germany sending even their defenders to the England area in pursuit of a last-minute equaliser, Moore sent a long pass to Hurst, who, by his own admission, wanted to shoot with the force he could muster: if it missed, the ball would fly as far as possible into the Wembley stands and would end up killing time.

It found the goal. England, the country who gave the sport to the world, won the final 4-2. And Geoffrey Charles Hurst (who was knighted later) remains the only person to score a hat-trick in the FIFA World Cup final.

He may not have played final, after all

But Hurst may not have played the tournament. For a long, long time, cricket used to be his first love. As Sam Webb wrote for Mail Online, Hurst regularly missed pre-season practice (even in October, when the light lasted) during his West Ham days to play cricket. Wicketkeeping was more appealing (once again, if you mind the pun) at that age.

Born in Ashton-under-Lyne, Lancashire, Hurst had made it to Essex Schools cricket side (he later recollected that it was for Essex Schools that he first played alongside Moore, eight months his senior). He found a place in Essex Second XI, and scored 20 on debut against Kent Second XI at Orsett.

In two weeks he played his only First-Class match — against Lancashire (his county of birth) at Liverpool in 1962, though not as a wicket-keeper (Brian Taylor kept wickets). He batted at No. 10, and though he walked out to bat, Trevor Bailey declared before he got a run. Up against Essex’s 296 for 8, Lancashire crumbled to 149 against leg-spinner Bill Greensmith (7 for 49).

Hurst batted at No. 8 in the second innings, and was up against the raw pace of Colin Hilton. He was bowled for a duck, thus registering a pair in his only First-Class match. Bailey declared immediately, setting Lancashire a target of 301. This time Jim Laker took centre stage and bowled Essex to a 28-run victory despite Jack Bond’s 118.

Hurst never made it back for the first side, but continued to play for the Second XI till 1964. He scored four fifties (three of them against Kent Second XI), and had five dismissals against Somerset Second XI at Brightlingsea in 1962. In all he played 23 Second XI matches, scoring 797 runs at 20.43 and affected 15 catches and 5 stumpings.

Back to where he belonged

It was not before Ron Greenwood of West Ham moved him from a midfielder to striker that Hurst shifted preference of sport. He was later to himself for making the decision. He scored 242 goals for West Ham in 500 appearances, helping them lift the FA Cup in 1964 and the European Cup Winners’ Cup the following year.

Hurst played for West Ham before he moved to Stoke City in 1972 (at a cost of £80,000). He bowed out of The Football League following his stint with West Bromwich Albion in 1976. He later played for Cork Celtic and Seattle Sounders before returning to England to coach Telford United and Chelsea. He also had a spell with Kuwait Sporting Club.

However, it was the World Cup 1966 that turned him into an English legend. He had an exceptional career for England with 24 goals from 49 matches. Other than his iconic hat-trick in the final (mentioned above) he also scored the only goal in the encounter against Argentina at Wembley. He also scored a goal against Romania at Guadalajara in 1970, and another in his solitary European Championship appearance, against USSR in 1968 at Roma. His other international hat-trick came in a friendly appearance against France at Wembley in 1969 when England thrashed France 5-0.

The one final appearance

Batting at three Hurst scored 2 before being caught by S Solari off K Davis, but West Ham defended their lowly total 165: Moore routed them for 123 with figures of 7-1-16-5. India vs Australia 2014-15: No end to Michael Clarke’s examination 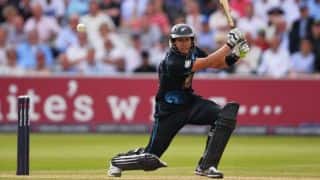