Geraint Jones is best remembered for playing a part in England’s Ashes 2005 victory.

Geraint Jones, the former England wicketkeeper-batsman, has added to his One-Day International (ODI) caps by playing for Papua New Guinea during their first ever game. Jones has thus become the ninth player to play ODIs for two nations. Nishad Pai Vaidya writes about the men who have donned coloured clothing for two countries.

Geraint Jones became the ninth man in the history of One-Day International (ODI) cricket to play for two countries. A competitive wicketkeeper-batsman, Jones is best remembered for playing a part in England’s Ashes 2005 victory. A competent wicketkeeper, Jones was safe behind the stumps. With the bat in hand, he was combative, though his average is moderate at best. However, Jones is one of the few Test cricketers to be born in a non-Test playing nation. That connection took him to Papua New Guinea (PNG), his birthplace, and now the country for whom he plies his trade at the age of 38.

Jones played 49 ODIs for England from 2004 to 2006, after which he was dropped in favour of Chris Read. One of the highs of his career was playing the ICC Champions Trophy 2004 final and scoring 71 in the NatWest Series final against Australia in 2005, which was a tied affair. Now, eight years down the line, Jones featured in PNG’s first ODI as they took on Hong Kong at the Tony Ireland Stadium, Townsville. In their run-chase of 203, Jones scored 20.

Here is a list of men who played ODIs for two countries:

Kepler Wessels: Wessels played for Australia during the Apartheid era in the early 1980s. He was an opening batsman for them and then moved back to South Africa. On their readmission in 1991, Wessels for got a chance to represent his home nation. He also led them in the 1992 World Cup.

Ed Joyce: The interesting fact is that Ed Joyce made his ODI debut against his native Ireland in 2006. In the same match, his brother Dominic, made his ODI debut for Ireland. In fact, it was Ireland’s first ever ODI. Joyce continued to be a part of the England setup until the 2007 World Cup and moved back to Ireland in the year to follow. Since then, he has played against England a few times.

Luke Ronchi: Luke Ronchi is an attacking batsman and a sound wicketkeeper. He had become Australia’s second-choice wicketkeeper behind Brad Haddin in 2008 and shined in his earlier ODIs. In fact, he had taken a catch off the very first ball he faced as a wicketkeeper in ODIs. However, his career in Australia fell through and he then moved to New Zealand, making his ODI debut for them in 2013.

Clayton Lambert: Lambert made sporadic appearances for the West Indies in the 1990s and could not establish himself. In 2004, he was in the United States of America squad for the ICC Champions Trophy 2004.

Dougie Brown: Brown, a leading figure at Warwickshire, was picked by England in 1997. He is a useful all-rounder, who bowled medium-pace. He was a part of Adam Hollioake’s new-look England one-day side in 1997 that won a quadrangular tournament in Sharjah. A decade later, he played for Scotland at the ICC World Cup 2007.

Boyd Rankin: For years, Rankin was Ireland’s spearhead and played two World Cups for them. The towering fast bowler can unsettle batsmen with pace and bounce. However, in 2013, he played for England to further his Test ambitions.

Anderson Cummins: In the early 1990s, Cummins was a part of the West Indies pace attack with Curtly Ambrose and Courtney Walsh. In 2007, he was in the Canada squad at the age of 42 and played the World Cup for them.

Eoin Morgan: The biggest one-day star in this list, Morgan is an exciting batsman for England. He played for Ireland during their pathbreaking campaign at the ICC World Cup 2007. Two years later, he moved to England and hasn’t looked back since. He is also considered a captaincy candidate for his adopted nation. 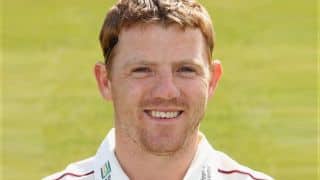