Get lost, Indian cricket fan. You're not wanted at stadiums!

Get lost, Indian cricket fan. You're not wanted at stadiums!

Stay away, Indian cricket spectator. You’re not wanted at stadiums. Didn’t you get the memo? Cricket is made for television.

While news channels vociferously try to ignite mass hysteria in the Indian public, throwing headlines and taglines like “the cup that counts” and “Cup chahiye toh chahiye“, the fan on the street has to be subject to a beating by a stick. Those with internet banking and access to computers have to look on in frustration as their hopes and money hung in limbo.

There was always trouble brewing, but matters reached a tizzy on February 23 when the website of Kyazoonga.com, the official ticketing partner for the event, crashed when tickets for the final went on sale. Thousands of fans who had purchased tickets online months in advance were left in confusion over the status of their undelivered tickets.

You really have to wonder where the men who run cricket have their priorities. The fact that the announcement of just 4,000 tickets being available to the paying public for the final at Wankhede Stadium on April 2 was made by Ratnakar Shetty, the World Cup Tournament Director.

The remaining 30,000-odd seats will be shared by Mumbai Cricket Association – of which ICC boss Sharad Pawar is the president- members and the ICC’s commercial partners, we were told.

A day later, in Bangalore, thousands of fans who had lined up out the Chinnaswamy Stadium to purchase tickets for Sunday’s match between India and England clashed with policemen who wielded laathis against the enraged mob. How can you blame the crowds, when you only release a fraction of the tickets to the public? The Chinnaswamy Stadium accommodates 40,000, but barely 8,000 tickets were reportedly up for sale.

Those who gathered outside – and some had been there all night – merely wanted to watch a match that their team was playing. Instead, humiliation and pain were meted out. The following day, during the South Africa–West Indies match at the Kotla, the competent Delhi police on duty refused to let food into the venue. Is this what the cricket fan must be subjected to?

Apparently, yes. In a country where enthusiasm towards the game is dwindling, and in a format in dire need of a facelift, cricket cannot afford to lose out on its most vital ingredient – the fan. By pricing tickets at exorbitant rates and limiting the number of tickets for a marquee event like a World Cup final, to be held at a swanky new venue, cricket’s administrators have begun to shut the door on fans.

Unlike in other sporting spectacles, such as the FIFA World Cup, the BCCI opted to print and distribute tickets through various state associations instead of one ticketing agency. Inevitably – this is India, after all – there were delays in the tickets being made available to those who had purchased them online. Further, the associations’ failure to efficiently alert sponsors of their quote of tickets led to a demand for additional tickets. In all this, the fan suffered.

In many ways, the Wankhede bourgeoisie’s decision to allow their patrons and assembly of familiar faces – for all we know, police, municipal and Mantralaya officials – to have first access to the World Cup final represents the shift in mentality and how cricket is run.

The cold truth is that the Indian spectator does not matter to the economy of cricket. Ticket sales just aren’t valued in this country. State cricket associations make so much money off shares from TV revenues that they don’t bother with money made from the gates.

Administrators cannot be bothered with selling tickets; instead, why not just let the people in for free?

Michael Holding, the former West Indies fast bowler, laments the scenario. “It’s ridiculous, really. Where does it leave the fans? Don’t tell me that you have built a stadium which can hold 40,000 people but you only have 4,000 tickets available to the fans,” he says. “You’ve got to make cricket accessible for the fans. Who else are you playing the World Cup for? Today it’s not about the fans and that cannot be the way forward. Consumerism and money drive the game today.”

Sadly, there isn’t much left for the Indian fan. Those that can afford it will rush to cough up Rs 14,000 for a World Cup final ticket. But what is that number? It is hardly representative of the public. Is this becoming a game for the rich? It’s the fans who have made cricket what it is today, and they are being completely shunned. Why should it take a directive from the Delhi High Court to force the Delhi & District Cricket Association to limit the number of complimentary passes for each of the four games held at the Kotla?

As Holding reminds us, watching games in a stadium is a full-body experience, not just visual. The atmosphere of the game live can’t be replicated via TV and fans feel a closer bond to the team and the game watching it in person. This is why ordinary fans thronged Lord’s for the World Cup finals of 1975, 1979 and 1983, why more than 80, 000 fans – some say there were a lakh! – flocked to Eden Gardens in 1987.

Today, it is evident that for the men who matter, the important section of a stadium is the private box hired by the limited liability company or public corporation, where invitations to have a drink or meet clients and sales managers happen more frequently than the fall of wickets. In those air-conditioned boxes, drinks are replenished and hands are shaken; outside, the true fans face physical danger in order for a few inches of space on a concrete block.

An incensed ICC has sent a stern letter to Sharad Pawar, its own chief, where it said the high demand for these tickets created the “potential for chaos and physical injury when the box office sales open”. The letter to Pawar, also head of the World Cup Organising Committee, warned of the problems lay ahead. Hang on; the ICC has to send a letter to its own boss about the perils of the fiasco? It defies logic.

Writer and essayist Mukul Kesavan writes in his 2007 book Men In White, of how as a nine-year old he had queued up from 5.00 am outside the Kotla to purchase a five-rupee ticket for a Test match, and that even a whack on his rear end by a laathi-wielding Delhi constable didn’t deter him from turning up the next day and standing in line. Those days are gone and with it, so too will the cricket fan.

Don’t bother turning up at matches. You’re not wanted. 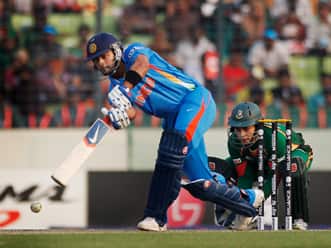 Indian cricket has found a gem in Virat Kohli