April 23, 1991. Eight days short of his 40th birthday, playing what would be the penultimate Test match of his career, Gordon Greenidge took the game away from Australia with a marathon 226. Arunabha Sengupta revisits the supreme knock under pressure that was the last milestone of a fantastic career. 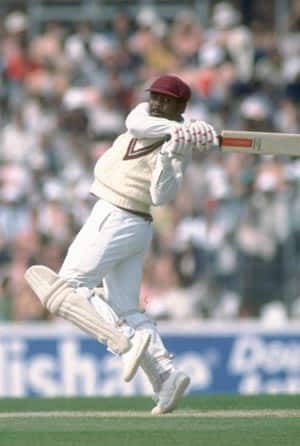 April 23, 1991. Eight days short of his 40th birthday, playing what would be the penultimate Test match of his career, Gordon Greenidge took the game away from Australia with a marathon 226. Arunabha Sengupta revisits the supreme knock under pressure that was the last milestone of a fantastic career.

He was a few days shy of his 39th birthday. His last score of substance had come more than a year ago. At St John’s against England, Desmond Haynes and he had romped for what seemed to be one last time. They had plundered 298 for the first wicket beating England’s score of 260. Since then, Gordon Greenidge, the man with the English defence and Caribbean flair, the hardest hitter of the ball for two decades, had looked a shadow of his great self.

In that Test in Antigua, Gladstone Small, Devon Malcolm and Phil Defreitas, three Caribbean born men, had sent down over after over. Greenidge had smashed them all and scored 149. In the 12 innings that had followed, he had managed to make just as many, 149 with a highest of 35, at an average of 13.55.  The century had in fact been an oddity. His bad days had started way back in April 1989, when he had suddenly run out of form against the visiting Indians. His last 23 knocks over two years, including that hundred, had brought him 495 runs at 22.50. Questions had long been raised about advancing years and slowing reactions.

The murmurs had become louder when he had fallen cheaply in the first innings of the fourth Test at Kensington Oval. The player famed for his imperious hook shots of yore had been caught at fine-leg, attempting his favourite stroke off a Craig McDermott bouncer. He had only 10 runs to show for his 42 minutes at the crease. Haynes, his old opening partner, had battled for 214 minutes for 28. But, McDermott and Merv Hughes had kept the ball outside the off stump, and the last six men had been caught in the arc between wicketkeeper and gully. All 10 West Indians had fallen to catches. Up 1-0 in the series, the home side had been all out for a total that was by now eerily familiar to Greenidge — 149.

But, Malcolm Marshall, Courtney Walsh and Curtly Ambrose had struck back. Australia had been in a strong position at 95 for three, when Allan Border was bowled by Marshall by a ball that hugged the pitch after bouncing. The next six wickets were lost for 39. Greenidge and Haynes were out once again before tea on the second day, leading by a slim 15-run margin.

Roaring back to form

With his place in the side under threat for the first time in his 16-year career, Greenidge took guard. Under the maroon helmet, the perpetual brooding look had been further underlined with increasing misgivings. On the stands sat thousands of his countrymen. This was Barbados, the land where he had been. There was inkling that it could be his last innings before his home crowd. Could he recapture the old magic for this final time?

A neat leg-glance, aided by some clumsy fielding on the boundary, allowed him to open his account with a four off the very first ball. Gradually the confidence came oozing back, and the colour returned to the stroke-play. The bat that had been going through a long, long drought now overflowed with a deluge of shots.

Bruce Reid ran in, and in that ominous sign of forthcoming destruction, the backfoot was slightly bent, the bat swung through in full West Indian grandeur and the ball streaked away to the cover fence.

Yet again, the two Bajan openers posted a hundred run partnership — for the 16th and last time in their immortal association. Haynes, circumspect and measured, took a couple of hours over his 40. However, Greenidge had regained the power and precision that had made him one of the most feared batsmen of all time. Out came the impeccable hook shots, and the drives drilled down the ground on both sides of the wicket and straight. By the end of the day, he had raced to 85. West Indies were 138 for one.

Greenidge batted through the next day. Day Three saw 269 runs for the loss of two wickets, 199 of them added by Greenidge and Richie Richardson for the third wicket. McDermott, Bruce Reid, Merv Hughes, and the Waugh twins bowled all day. Greenidge stood like a rock. A square drive off Steve Waugh left the grass smouldering. And a drive through the covers off his backfoot raised the 19th hundred.

The short balls were now being picked up from the off and dispatched to the leg boundary. The off-drives were being struck like hurtling cannonballs. A flash of the willow off Reid sent the clocks whirring back as the famous Greenidge square-cut was brought out of the recesses of memory. The crowd went wild.

An innocuous delivery from Mark Waugh dismissed Richardson, one run short of his hundred. But Greenidge batted on, Carl Hooper for company. An on drive was struck for glory, and raced away square of the wicket — not off the middle, not at the gun-shot speed associated with the man, but, nonetheless, all the way for four bringing up his fourth double hundred.

Unbeaten overnight on 209, Greenidge started Day Four with a spanking on-drive off Hughes. This was followed by a crashing pull off Mark Waugh. And finally he tried to hit a straight ball from Hughes across the line, and was struck plumb in front. It had been a career-best knock of 226, made off 480 balls over 10 hours and 17 minutes, with 32 hits to the fence.

Greenidge walked back to rousing applause, a hint of smile on his face. And before departing from the ground, he turned once, raising his bat in all directions, acknowledging the cheers that he perhaps knew would be the last hurrah of his glorious career.

West Indies lost the last four wickets for 24, but ended up declaring at 536 for nine. The target was a colossal 552, but captain Viv Richards had allowed the innings to drift rather needlessly, and the Australians had an outside chance of salvaging a draw.

Ambrose got Geoff Marsh first ball, but Mark Taylor batted over six hours for 76, in a desperate attempt to save the match. However, minutes from stumps on the fourth day, Ambrose struck twice, removing David Boon and Allan Border in successive overs.

On the final morning, with Dean Jones batting through the first session with Marsh, there was some hope for the visitors. But, the last six wickets fell for 18, and West Indies triumphed with plenty of time and truckloads of runs to spare.

Greenidge played just one more Test, the last of the series at Antigua, and scored six and 43. The final association with Haynes at the top of the order did yield 76, but it ended surprisingly in a run out. But, it was no error of communication. A scorching Greenidge’s straight drive was deflected on to the stumps by Hughes with Haynes out of his ground. Greenidge followed his partner soon enough, failing to beat a throw, and both had run outs against their names in their last appearance together. 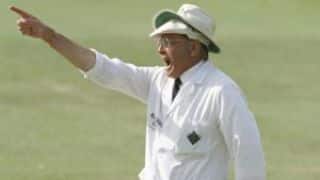 Dickie Bird: The superstar among umpires