Graeme Smith’s journey thus far has seen its ups and downs, but today South Africa stands head and shoulders above the other sides. They have always had the right mix of consistent batsmen and dangerous bowlers, but Smith has overseen the growth of this side into what it is today. Graeme Smith, the captain of the best Test side in the world, is on the cusp of a rare milestone. It is a feat that affirms his status as a colossus in the modern game as he is set to captain a side for the 100th time in a Test match. Leading a side in a Test match is a huge honour, a privilege which only a few are bestowed upon. It is also a challenge that demands every inch of one’s cricketing skills and leadership qualities. To captain a side at the highest level for almost 10 years and to do it in 100 Test matches bears testament to Smith’s stature as a leader of men in a South African side that is eying world domination.

Technically, it would be the 99th time Smith will lead South Africa when they take on Pakistan at Johannesburg on February 1. He led an International Cricket Council (ICC) World XI in a Super-Test against Australia in 2005 and that has been counted as an official game. However, what makes it more special is that he will achieve the milestone on his 32nd birthday. He would want to celebrate with a convincing Proteas win – something that has become a habit for his side.

Smith’s journey thus far has seen its ups and downs, but today South Africa stands head and shoulders above the other sides. They have always had the right mix of consistent batsmen and dangerous bowlers, but Smith has overseen the growth of this side into what it is today.

In March 2003, the South African management stunned the world by naming the 22-year old Smith at the helm of affairs. The country had suffered the embarrassment of being knocked out in the first round at the 2003 World Cup and the talismanic Shaun Pollock was stripped off the responsibility. Some expected a Jacques Kallis or Mark Boucher to take over. Hardly had anyone thought that the eight-Test old Smith would be elevated as captain for all the formats. It was indeed surprising as he wasn’t even a part of the original World Cup squad.

The 22-year old faced his first test in Bangladesh when South Africa toured for a one-day tri-series and a two-Test match series. In his very first game in charge (a One-Day International), South Africa were battered and bruised and the picture did not look all that good. The rest of the tour panned out well for the Proteas and Smith lived to fight another day. But the first real test awaited him in England. That tour changed Smith’s career and cemented him as a leader and a batsman. He smashed two double hundreds on that trip and assured the fans that he was here to stay.

As a leader, Smith has shown the ability to guide by example. There is a sense of fight and grit about him that can inspire the others in the side to raise the bar. His teammates hold him in high regard and share a camaraderie that certain units would envy. In a recent video, some of his teammates have expressed their gratitude and described how he has shaped them as players. To get the best out of his players, a leader has to understand his troops and study their minds – which Smith has done successfully.

It is that commitment and the passion to succeed that helps Smith set examples for his side. The most memorable one – a defining moment one might say – came during a Test match against Australia in early 2009. South Africa had already won the Test series and that final game of the series was heading Australia’s way. Smith had broken his hand in the first innings and was unlikely to bat in the second. With nine wickets down in the fourth innings, a Proteas defeat was obvious, but to everyone’s astonishment, the captain walked out to put up a brave front. That he held on for a few deliveries to delay the defeat was phenomenal – particularly when you consider the excruciating pain he suffered.

There are statistics that prove Smith’s greatness as a leader. Winning two consecutive Test series in England and Australia is no mean feat. Furthermore, he has also two drawn series’ to his name in India. What it says is that he has carved out a side that believes it can do well in any situation – irrespective of the conditions. But, this is a moment one must look beyond mere statistics and acknowledge the jewel he has been for South African cricket.

One can say that Smith has led almost throughout his career and yet it hasn’t diminished his aura with the bat. He averages close to 50 in Test cricket, and that in itself shows how well he has been able to draw the line between the two facets to his game. Today, he has given up the reins in the shorter formats, but his hunger to lead the side in Test cricket remains. This auspicious occasion will motivate him to aim higher as there are many things he would want to achieve.

Smith is not done yet. 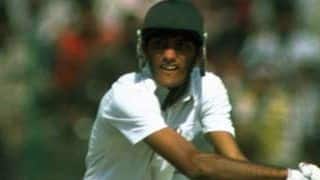