Graeme Swann, who took all four wickets to fall on the first day of the Ahmedabad Test, shows signs of becoming the greatest off-spinner produced by England since Jim Laker. Arunabha Sengupta looks at the best exponents of an art that might look innocuous to the outsider. Graeme Swann, who took all four wickets to fall on the first day of the Ahmedabad Test, shows signs of becoming the greatest off-spinner produced by England since Jim Laker. Arunabha Sengupta looks at the best exponents of an art that might look innocuous to the outsider.

The off-spinner is often the preferred bowler for right-handed batsmen. Traditionally, the offie does not have the deceptive weapons of his leg-spinning counterpart. But over the years there have been off-spinners who have been quite cunning with the ball with a slew of weaponries — tantalising flight, inviting loop, straighter ones, drifters, shades of deviation that comes with the breadth and depth of the crease, change of pace and, finally, that curious innovation called the doosra. Incredibly, the off-spinners are right up there as some of the best in Test history.

Graeme Swann, who took all the four wickets to fall on the first day of the ongoing Ahmedabad Test, is another in a long line of great off-break bowlers of all time.

Here is a list of some of the best off-spinners in history.

One of the earliest of the kind who bowled at close to medium pace, Palmer was brilliant even on plumb batting surfaces, and unplayable on pitches that offered turn. Playing for the early Australian teams, he laid claims greatness with 24 wickets against England in 1881-82. However, a promise of a huge tally of scalps was left unfulfilled when he fractured his knee-cap in 1886. He was just 27, an age when spinners normally start to mature. He never played Test cricket again, but 78 wickets at 21.51 was quite a haul in the 1880s.

He was the first England off-spinner to make a mark in international cricket. At Melbourne in 1882-83, he took seven for 28 in the first innings, including the first hat-trick by an Englishman, followed by seven for 74 in the second. However, even his career was ended by a freak injury, when, while bowling in the nets, a straight drive hit him in the face and damaged his eyesight. Forced to give up cricket at 32, he nevertheless ended with 50 wickets at 16.42 apiece. He was also a good enough batsman to be used as an opener in Test cricket. While Trumble was a handful on any wicket, on wet ones he was deadly. He could turn the ball miles on a good strip, and make it bite and bounce on a wet one. He also possessed an exceptional slower ball which had many a fine batsman fooled and walking back to the pavilion. In the great fifth Test at The Oval in 1902, known as Gilbert Jessop’s match, Trumble scored 64 and picked up 12 wickets, but ended up on the losing side as England squeezed home by a wicket. He ended with 141 wickets. 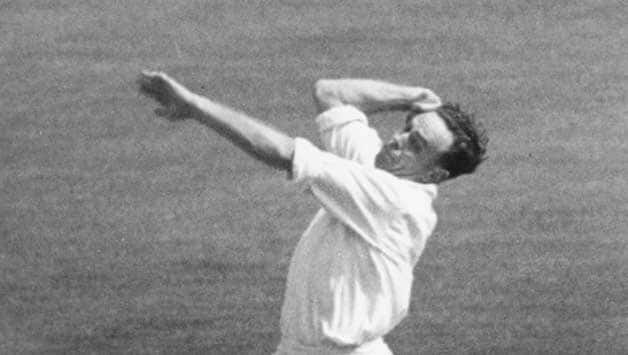 After a few decades dominated by wrist spinners and left-arm slow bowlers, Ian Johnson put the Australian off-spinner back on the cricketing map after the Second World War. Possessing an action that has been compared to a corkscrew, and according to EW Swanton ” the slowest bowler to achieve any sort of success in Test cricket”, Johnson’s flight and dip could deceive the best of batsmen. And he was a handy person to float his offerings into the breeze. A handy batsman as well, he is remembered as one of the more unsuccessful captains of Australia. Yet, he did capture 109 wickets at 29.19. Perhaps the greatest of all off-spinners ever to have played Test cricket, Laker scripted his name in immortal letters when he claimed 19 Australian wickets at Manchester in 1956. Along with his spin-twin Tony Lock, he spun a web around opposition batsmen for eleven years in Test matches, and ensured a record succession of county championship triumphs for Surrey. His 193 wickets came at an average of 21.24 which is staggering for a post-First World War spinner. The first great off-spinner of India, Ghulam Ahmed was a part of the initial Test victories of India. Along with Vinoo Mankad and Subhas Gupte, he formed the first spin-trio of Indian cricket. Accurate on good wickets, he was almost unplayable on helpful tracks. His career stretched eleven years, but he played just 22 Tests and bagged 68 wickets. One of the greatest South African bowlers ever, Tayfield took more wickets per Tests than his illustrious contemporaries Laker and Lock. Exceptionally accurate, he could bowl all day without wavering. He generally bowled fromvery close to the stumps, using the angle to make the ball drift away and break back. Tayfield often left large, tempting gaps around extra cover with two straightish silly mid-ons waiting for the drive. Against England at Durban in 1956-57, he bowled 137 consecutive balls without conceding a run. He ended with 170 wickets. Ramadhin was not exactly an off-spinner. With sleeves buttoned up,ensuring the variations in his action were difficult to pick up, he turned it both ways, orthodox spin as well as wrist spin that turned the other way. With his spin twin Alf Valentine, he bowled West Indies to their first win in England and had an immortal calypso composed in his honour. The first cricketer of Indian origin to play for the islands, he had 158 wickets when his career came to an end. A cockney who was known for his Chaplinesque walk and celebrated wisecracks, Titmus had the misfortune of a career that coincided with Ray Illingworth. However, he was great survivor who played for two decades and even overcame a boating accident that cost him four toes. He managed to play 53 Tests, his slow, flighted off-spinners getting him 153 wickets, while his practical, no-frills batting got him 1449 runs. 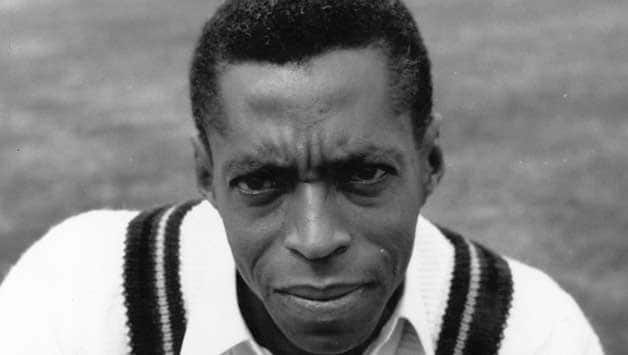 A classy spinner who used his height to extract bounce and the long fingers to tweak the ball and make it spin, Gibbs was the main tweaker of West Indies over one and a half decades. Bowling in a side with the likes of Wes Hall and Charlie Griffith, and later Andy Roberts and Michael Holding, Gibbs kept one end going with his off-breaks, but became a major attraction in his own right with a hat-trick at Adelaide during the famous 1960-61 series. He became the second bowler to take 300 wickets in Tests after Fred Trueman and ended with 309, a world record at the time of his retirement. Known more as a great captain, Illingworth nevertheless used his crafty field positions to give the impression of bowling with 15 or 16 fielders. Added to this, he was miserly and uncannily accurate. He ended with 122 wickets in 61 Tests, a meagre two wickets per Test, but his accuracy ensured a healthy average of 31.

An engineer by qualification, Prasanna’s bowling was as close to chess as cricket can ever get. He perhaps got most wickets by out-thinking the batsmen before even running up to bowl. A master of the flight, he fooled many classy players by making apparent half-volleys suddenly assume dangerous proportions. His arm ball was a class act that floated, drifted and wobbled. Using the depth and width of the crease to fascinating extents, he picked up 189 wickets, but was good enough for many more had he not been absent for five years to complete his studies and later often excluded in favour of Srinivas Venkataraghavan.

Accurate, and often incisive, Venkat was good enough to play a lot more had his career not seamlessly coincided with the greatest off-spinner of India, Prasanna. Along with Bhagawat Chandrasekhar, Bishan Bedi and Prasanna, Venkat formed the famed spin quartet, and unfortunately only three of them played together most often and the axe generally fell on one of the off-spinners.  Although largely considered inferior to Prasanna, Venkat nevertheless played a leading role in the twin triumphs in West Indies and England in 1970-71. A close-in fielder of exceptional reflexes, he also led India in two World Cups.

A rare off-spinner of class of the post-War Australia, Mallett was unusually successful in his home country and his teasing fight and turn got him 132 wickets till World Series Cricket shook the foundations of the game. A prolific author of cricket books, Mallett was short-sighted, but surprised everyone by being a brilliant fielder at gully. Playing in an era of Gibbs, Prasanna and Venkat, his strike rate was the best among off-spinners. While Abdul Qadir and Iqbal Qasim largely overshadowed Tauseef, Imran Khan did have a lot of faith in this canny off-spinner. An accurate bowler whom even the Indian batsmen found difficult to get away, he was at his best during the famous Pakistan win in Bangalore, which was also Sunil Gavaskar’s last Test. He ended with 93 wickets at an average better than Qadir. 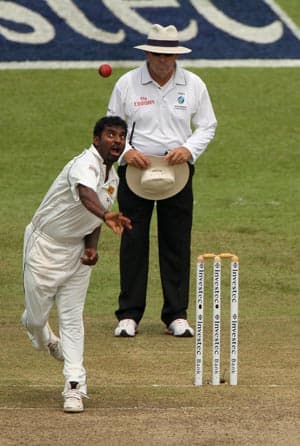 The man who changed the image of off-spin bowling, Muralitharan was perhaps the first wrist-spinning off-spinner ever. A man who spun his doosra like a genuine leg-break, he overcame controversies related to his action to end up with a world record 800 scalps following a dream last Test. One of the few spinners to trouble even the Indians and Pakistanis, he took five wickets an innings and ten wickets in a match a tottering 67 and 22 times respectively.Coming into the cricket arena in an era dominated by pace bowlers, he put spin back on the front page along with Shane Warne and Anil Kumble, and finished with an average and strike rate better than many of the best fast bowlers. Passionate and excitable, Harbhajan enjoyed a dream series when he single-handedly bowled India to victory in the pivotal series against Australia in 2000-01. Someone who could bounce more than most spinners, and got batsman and batsman pushing to the short-legs, he also developed a straight ball and doosra that flummoxed many. A dip in the recent years has seen him out of the side, and the last few barren years contrast drastically with a career that has seen him become only the second off-spinner to capture 400 wickets. An attacking spinner with flight, bounce and variations of pace, Swann looks likely to become the greatest off-spinner England has produced since Jim Laker. His arm-ball and ‘flying saucer delivery’ are potent weapons and he prefers to attack regardless of the situation, always keen on picking up wickets. A handy lower order batsman as well, he started the tour of India with 192 wickets in 46 Tests. A late bloomer with a terrific doosra and fascinating variations of pace and flight, Ajmal has been in a hurry to make up for lost time. Bowling the doosra and off-spinner with almost the same action and identical line, he is monstrously difficult to pick and play. The last two years have been particularly productive and he has all the makings to become one of the best ever, standing with 122 wickets at 27.09 in a largely bat dominated era. 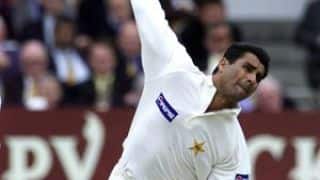