Graeme Swann’s retirement: Pressure gets to one of the game’s most colourful characters?

Graeme Swann’s retirement: Pressure gets to one of the game’s most colourful characters?

Swann’s retirement shouldn’t have been unexpected considering what transpired in the past.

For Australian and English players, Ashes is the pinnacle of Test cricket. It’s their Holy Grail, for as kids they’d dream of donning the prized flannels and entering the elite list of cricketers to be a part of this sport’s oldest rivalry. The urn may be small, but it’s the most coveted trophy in the Test arena. As former Australian captain Ricky Ponting, who revelled at the top for almost two decades, states, it’s where real legends are born and heroes are made. It’s where reputations can be cemented or ruined forever. One glance at the monumentality of the occasion gives us a fleeting idea of the kind of pressure the players often have to deal with.

Graeme Swann’s retirement, therefore, although surprising, shouldn’t have been totally unexpected considering what transpired in the past. Sportsmen, who intentionally or otherwise trek into limelight, are often subject to severe media scrutiny and, in cricket’s small pool, a few expressive characters easily stand out. While the issue they knowingly or unknowingly instigate may grab headlines for a few days before disappearing into obscurity, it tends to take a lot out of the player involved mentally, sometimes scarring him for good. The repercussions may not immediately be visible, but it eventually comes to the fore.

Swann is not the first player to retire mid-Ashes, and perhaps won’t be the last. In 2006-07 series, Australia’s Damien Martyn called it quits after just two Ashes Tests, during which his side usurped two wins. Martyn’s retirement took not just the cricketing fraternity, but even his own team-mates, by surprise. None of the players, including skipper Ponting, were aware of the batsman’s decision, and only an email sent to Cricket Australia’s James Sutherland — in which he announced he was retiring from all forms of cricket with immediate effect—was the form of communication employed. While Martyn’s impromptu decision must have rattled the Australian unit immediately, they did well to regroup and whitewash the English.

Martyn was relentlessly bashed by the media in the days leading up to his retirement. He was one of Australia’s most successful batsmen in their victorious ICC Champions Trophy campaign that year, but during the post-match presentation, he was involved in what turned out to be an international incident, as Sharad Pawar, then Board of Control for Cricket in India (BCCI) president, was pushed off the dais by the Australian cricketers, and photographs depicted Martyn leading the callous incident. The fallout was that while the Australian team was, yet again, termed ‘ugly’, Martyn copped the brunt from the media. The scrutiny apparently ruffled him, and it’s said to be one of the chief reasons why he bid adieu to the sport, although one failed to comprehend its timing.

One other theory at the time claimed that Martyn quit because he was about to be dropped. A relatively new batsman in the form of Michael Clarke slammed a century in that second Ashes Test of 2006, whereas Martyn could muster just 11 and five in the two innings, which added to a string of poor scores in the longer format of the game. Despite Australia cruising towards reclaiming the urn, he felt he no longer could be a part of that grind and decided to hang his boots.

Swann, too, was at the receiving end of media’s fury a few days earlier. In response to his brother Alec’s status update about attending a concert on social networking site Facebook, Swann wrote: “Rather have been there than being a**e raped in Perth!” Almost immediately, he was chastised by certain sects of the media, with chief executive of Rape Crisis openly expressing his displeasure. The off-spinner has often been in the spotlight, but primarily for his dexterity on the field. Nonetheless, the last few weeks have no doubt been demanding, and he has rendered futile with the ball, too, bagging seven wickets in three Tests at an average of exactly 80. It remains unknown whether, like Martyn, the public scrutiny (which at times has gone beyond just the ‘Facebook’ case) got to Swann, compounded by the fact that England were headed down a slippery slope, or whether he too felt he’d be dropped sooner than later. Former Australian cricketer Dean Jones’ tweet, “Bat pad tells me that #Swann was going to be dropped for MCG #ashes #swannsong… Thanks @bowlologist”, suggests the latter.

What transpired behind those closed doors will perhaps never be made public, but just like it was with Martyn, cricket will be poorer with the exit of one of the game’s most colourful characters. One of the finest spinners in the world bids goodbye, and his contributions deserve rousing applause. Sitting on the sidelines, one can never fathom the kind of pressure the cricketers shoulder, especially in a series as big as the Ashes, and while some barely manage to withstand its wrath, some duly, but sadly, wilt under it.

Like the Australians of 2006, the current English unit will regret not having the chance to celebrate Swann’s career, to express gratitude for everything he’d done. 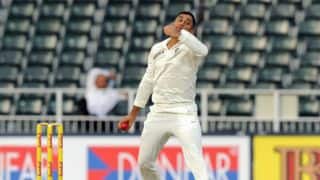 India inch closer towards victory on an action packed Day 4