Grant Elliott was born in Johannesburg, South Africa, and played cricket at domestic level. He studied there at St Stithians along with couple of other international cricketers such as Michael Lumb and Jonathan Trott, who later moved to England.

Born March 21, 1979, Grant David Elliott is the former New Zealand all-rounder in ODIs and Tests. However, he is yet to take a call on his T20I career. He is famously known for his finishing off an intense World Cup 2015 semi-final with a six against Dale Steyn. Elliott represented New Zealand in 5 Tests and 83 ODIs before retiring. He scored 1,976 runs in ODIs at 34.06 and also scalped 39 wickets. He was born in South Africa but currently plays for New Zealand. On his 38th birthday, Abhishek Kumar brings out some interesting facts:

Elliott was born in Johannesburg, South Africa, and played cricket at domestic level. He studied there at St Stithians along with couple of other international cricketers such as Michael Lumb and Jonathan Trott, who later moved to England. He was considered as an outstanding cricketer since he was in school. He represented South Africa at Under-19 level and also played a game against New Zealand and faced Kyle Mills, with whom he played with in ICC Cricket World Cup 2015. It was probably the quota system of Cricket South Africa (CSA) forced him to leave South Africa.

Former New Zealand cricketer Ken Rutherford asked Elliott to leave South Africa in order to secure his future in the sport. Rutherford was the captain of his team at provincial level in South Africa.

It s not an easy thing to leave one s motherland but Elliott took this bold decision and left South Africa in 2001 and moved to Wellington. After seven years, he represented New Zealand cricket team.

Playing his fourth ODI, Elliott was involved in a controversial run out which many said it was an unfair decision. It was the fourth match of the series between England and New Zealand at The Oval. Off the fourth ball of the 44th over, when New Zealand were cruising towards win, Ryan Sidebottom bowled a good length delivery which was very well defended by Elliott and from the non striker’s end, Kyle Mills wanted to take a run. In this hurry to take a single, Elliott crashed with Sidebottom, who was going to collect the ball. After the crash, Elliott fell on the ground clutching his thigh. Ian bell took the ball and threw it to Kevin Pietersen to run him out as Elliott was well short of the crease. Both the on-field umpires asked England skipper Paul Collingwood to take a decision and in the heat of moment, they decided to sent Elliott back to pavilion.

Later, after England lost the match in the last ball thriller, captain Collingwood admitted his mistake in taking that run out decision and said, “I’ve never been in that situation before. I don’t think I’ve even been on the field as a player [when a decision like that has been made]. In hindsight I wish I had called him back. You come off the pitch and wonder if you should have done things differently. I hold my hands up and say I probably made the wrong decision, and that is something that I will have to live with.”

5. When Elliott thought of leaving New Zealand too

In 2011, Elliott was nowhere around New Zealand cricket team as he was dropped following a poor run in 2010 and also missed the ICC Cricket World Cup 2011. Around that time, Elliott thought of leaving cricket as well as New Zealand. But at that time, his wife was pregnant and was not financially very strong enough to make any such decision. But as they say, time heals it all, and after hard work for two years or so, Elliott found himself back in the Kiwi side.

6. Batted outside off stump for the whole match

During a league match between Wellington and Canterburry in the George Pie Super Smash T20 tournament, Elliott batted with a very different stance to unsettle the bowler, Andrew Ellis. Ellis was bowling exceptionally as compared to other bowlers in the tournament and by taking that indifferent stance, Elliott was able to score runs easily. Elliott scored a rapid 23-ball 52, which helped Wellington in winning the match.

Very few people knew that Elliott is the maker of the Buzz Cricket Bat, which he usually uses. Apart from him, other cricketers like Dewayne Bowden, Mark Houghton, Leighton Morgan, Chris Nevin and Luke Woodcock have also used his bat.

In the semi-final of ICC Champions Trophy 2009, Elliott was New Zealand’s go-to man in an exciting chase against Pakistan. He came at the crease when New Zealand were struggling at 71 for 3 in the 17th over. From there on, he played till the end and remained unbeaten on 75, which he scored with a broken thumb!

9. The epic partnership with Luke Ronchi

During the fifth ODI against Sri Lanka at Dunedin, batting first, New Zealand were 93 for 5 in the 20th over. Elliott joined forces with Luke Rochi, and they defied the Sri Lankans. Elliott and Ronchi added 267 runs for the sixth wicket, which still remains a record. Elliott scored a 96-ball 104, while Ronchi made a 99-ball 170 and gave New Zealand a strong total of 360 runs to defend, which they eventually won it by 108 runs.

Elliot was no where around in New Zealand s 2015 World Cup squad. But Jimmy Neesham s injury paved way for him. . However, his selection was questioned but it proved to be a master stroke as he played a key role in New Zealand s journey to final.

11. The six that changed his life

In the semi-final of World Cup 2015, Elliott was the one who changed the course of the match against South Africa. Chasing 298 in 43 overs against South Africa was never going to be an easy task but Elliot held his nerves and batted till the end of the match to ensure New Zealand s victory. In the last over of the match, 12 runs were required for new Zealand and they were up against Dale Steyn. New Zealand scored 2 runs of the first 2 balls and then Daniel Vettori hit a boundary off the third. New Zealand required another 5 off 2 balls when Vettori and Elliott took a single off the fourth. The whole stadium went silent as both teams were desperate to make it to the final. Steyn bowled a length ball and Elliott played his best shot of his career, lofting it over for a six. Elliott celebrated the victory and New Zealand were into the final for the first time in the history of World Cup. That six truly changed his life and made him a hero in New Zealand.

12. Elliott provides cricket another Spirit of the game moment

After hitting the winning the six off Steyn, Elliott was justified to have broken into wild celebrations. Instead, he walked up to a shattered Steyn who lay on the field dejected. It became another Spirit of the game moment. He walked up to the man he had just ruined and lent his hand to help him get up. It was a moment that took one back to the 2005 Ashes Test at Birmingham when Andrew Flintoff comforted a crestfallen Brett Lee.

Elliott summed it up beautifully at the post-match press conference: I think you have to feel compassion, humble in victory, humble in defeat. It is part of what I am. I felt quite sorry for him, I felt quite sorry for a lot of the South African guys for losing the game. It could have been us, it could have been me sitting there having missed the last two balls and I would have been pretty gutted, as well, along with 40,000 people in the stadium, I just felt a little bit of compassion towards him. It means a lot to them. Obviously they ve never made a final, and we wanted to just as bad as they did.

After Elliot became an overnight hero for his country when he smashed the winning six to guide the team on March 24, 2015 to their first ever appearance in World Cup final. He never thought that his team would make it to the final and because of that he had to miss his sister s wedding which was on March 27 two days before the final at Melbourne. He revealed that in front of press and said, My family was here and my sister has got a wedding on Friday. Unfortunately I ll miss her wedding. If you can put that in the press and say I m sorry, I saw her earlier, she was pretty happy for me, but yeah, I m going to have to give her a special gift, I think.

14. Elliott’s special gift to his sister

Elliott pledged to pay for his sister’s honeymoon because he skipped her wedding in order to play in the World Cup final.

In February, 2016, Elliott helped another South Africa cricketer named Malcolm Nofal to join New Zealand cricket. Nofal was then just 24-year-old and was born in the same town where Elliot was in Johannesburg and his currently following the similar path. He is currently the member of Wellington.

In the final of 2015 World Cup, Elliott was sledged by Australian wicketkeeper Brad Haddin. Elliott was the top scorer in the final with 83 butNew Zealand lost the match. When Haddin was asked about his sledging he said all he did because New Zealand were too nice, It was that uncomfortable, all they were was that nice to us for seven days.

When Elliott was asked related to that sledging incident, he said it was just a friendly banter nothing serious.

Elliott graduated from Otago Polytechnic in December 2015 with a Bachelor of Applied Management through Capable NZ. Elliott was quoted in a report from wellington.scoop.co.nz saying, I always wanted to get a degree and started doing a Bachelor of Commerce when I was 19, but then professional cricket took over. The Bachelor of Applied Management through Otago Polytechnic has helped me realise I have skills that are transferable for when I do make the transition from sport, and the knowledge that I can achieve and progress in any job I choose.

He further added saying, The Bachelor of Applied Management has given me the confidence to enjoy my cricket more as well so I can go out there and play the sport with a smile on my face instead of dreading what might happen after my sporting career is over.”

During the third and last ODI of the Chappell-Hadlee Trophy 2016 between New Zealand and Australia at Seddon Park, Hamilton, another incident of sledging was witnessed. Mitchell Marsh, in the 34th over, was adjudged out in a controversial manner. Marsh was furious over this decision and showed his anger while walking back. Marsh was even caught on the camera using the ‘F’ word for Brendon McCullum.

In the following over, Matthew Wade and Elliott got engaged in a heated sledging as the Australian wicketkeeper-batsman said, only a f ing coward sledges people when they walk off , while standing at the non-striker’s end. In reply, Elliott came back very generously and said, love your work . All this was heard in the stump microphone and ended before umpire Gould had to intervene.

Elliott has been given few nicknames and one of the most popular names is Hairy Javelin because he is both very hairy and skinny. He is also called as Shunt and Magic.

Throughout his career, he played for many teams and these are, Gauteng, Griqualand West, New Zealand A, Quetta Gladiators, Surrey, Transvaal, Wellington and New Zealand. 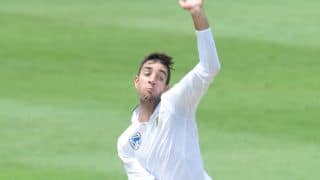