Parvez Rasool, Jammu and Kashmir's hope and the state's unofficial brand ambassador, has found support in Omar Abdullah. The Jammu and Kashmir Chief Minister lashed out at team management and the BCCI for not showing support to the young all-rounder. Sudatta Mukherjee writes the different sides of the story. 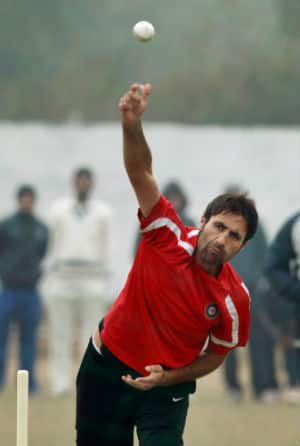 Why was Parvez Rasool picked up for the tour of Zimbabwe? © PTI

Parvez Rasool, Jammu and Kashmir’s hope and the state’s unofficial brand ambassador, has found support in Omar Abdullah. The Jammu and Kashmir Chief Minister lashed out at team management and the BCCI for not showing support to the young all-rounder. Sudatta Mukherjee writes the different sides of the story.


India’s tour to Zimbabwe was a chance for young cricketers like Cheteshwar Pujara, Ajinkya Rahane, Mohit Sharma and Rasool to prove themselves. All, barring Rasool, got an opportunity. Even Rahane, the unofficial 12th man of the team, got his share. What was the reason for the team management not playing Rasool?

Rasool has been the standout player from Jammu and Kashmir. He made an impact when he bagged seven wickets in a warm-up match against Australia in February. He also became the first cricketer from the state to be selected by an Indian Premier League team — Pune Warriors India. However, if one looks closely, apart from last year’s Ranji tournament, the all-rounder has done little of note.

In the two matches that he played in the IPL, Rasool picked up only one wicket and scored five runs (against Mumbai Indians and Kolkata Knight Riders respectively). However, one cannot come to conclusion about a person from two matches.

The Indian think-tank may be aiming to give opportunities to those who they think are potential candidates for the ICC World Cup 2015 squad and its possible that they don’t think Rasool is a hot prospect as the Australian wickets help the fast bowlers more than the spinners. India has a good off-spinner in Ravichandran Ashwin. In 2012, after a decade, India fielded two off-spinners in same Test. However, in Australia, one is not expected to see such a scenario. If for any reason Ashwin is not available, then Pragyan Ojha is the second best man.

If Rasool is to be selected for batting purposes, Ashwin again comes handy as a lower-order batsman. India also has Ravindra Jadeja, who has proved vital for the team in winning matches lately.

Players like Pujara, Mohit and Rahane, who got a chance to play, plays different roles in the team. Pujara and Rahane are being tested out as batsmen, while Mohit is a medium-pacer. If India is building a team and testing players keeping World Cup 2015 in mind, then Rasool is unlikely to fit in. But all said and done, the team management should have played Rasool. Especially considering the fact that Zimbabwe were outplayed in the series and there was very little to gain from the matches against such a weak opponent.

What is perplexing is why then was Rasool picked for the tour of Zimbabwe? By not going him a chance against such a weak opposition even after taking a 4-0 lead, the team management has not done his morale any good.

Cricket writer Pradeep Magazine says, for a Kashmiri boy, who has chased his dream through hardship, he has been the hope for gun-toting rebels or a stone pelter. He has been the pride of the valley, a place famous for producing bats. Rasool has overcome hurdles (lack of infrastructure, violence in the state). He for many young Kashmiri cricketers is dream pipe. Adil Rashid, a young batsman of immense potential, who has been Rasool’s teammate right from his school days till the Ranji team, told Hindustan Times, “He has opened a door which seemed shut for us. Now we all feel it is possible to play for the national team.”

Being on good terms with BCCI still critical for other countries