Great opportunity for Bangladesh to emerge from the shadows, feels Habibul Bashar

As Bangladesh braces for the biggest match of its cricketing journey, the one question it must ask itself is this is it merely satisfied that it has finally made the semi-final of an ICC event, or does it have the hunger and the desire to go a step further? Knowing the team and the pride it has in its performances, the answer is fairly straightforward. While it can be justifiably happy at the fact that it is in the semi-final of the ICC Champions Trophy 2017, the team will not be content to rest on its laurels. This is a great opportunity for Bangladesh to emerge from the shadows and establish itself as a serious contender for higher honours, and that is how it must and will approach the semi-final against India at Edgbaston on Thursday. Full Cricket Scorecard, India vs Bangladesh, ICC Champions Trophy 2017, 2nd semi-final, Edgbaston

The last couple of years have seen Bangladesh s stock climb exponentially, starting from its quarter-final appearance in the ICC Cricket World Cup 2015. That run has since mushroomed into several excellent limited-overs results, mainly on home turf, as well as a maiden Test victory over England, also at home.

Bangladesh has also made the finals of the Asia Cup in both the 50-over and T20 formats, and while those are all wonderful achievements, I think this semi-final berth in the ICC Champions Trophy 2017, where the top eight teams in the world are in attendance, must rank at the top of the list.

At the start of the tournament, few would have given Bangladesh a chance of making it to the knockouts, and perhaps justifiably so.

Bangladesh was clubbed in the more competitive Group A alongside England, Australia and New Zealand, all of whom have had fairly good results in such competitions. But, such is the beauty of cricket that reputation and pedigree count for only so much. At the end of the day, what matters is what kind of cricket you play out in the middle, and Bangladesh played excellent cricket against New Zealand, which is why it now finds itself within one win of a place in the final.

Agreed, Bangladesh hit it a little bit lucky with the weather, but then again, it isn t the first team to benefit from the vagaries of nature, is it? The important thing is what you do with the fortuitous opportunity that has opened up for you. Bangladesh seized that lifeline with both hands to orchestrate an extraordinary run-chase against New Zealand, so there is no denying the fact that it deserves its place in the semi-final.

This is a moment Bangladesh cricket, as well as 160 million Bangladeshis, have waited for a long time. The passion for cricket in my country is massive, and I feel the die-hard fans deserve a team that is capable of rubbing shoulders with the best in the business. Before the tournament began, I had said in these very columns that Bangladesh no longer had a point to prove to anyone, and that if it doesn t make it to the semi-final, it must see it as a failure of sorts. I am glad that the team has vindicated my stance.

Both the victory against New Zealand and the way in which it was achieved would have immensely boosted Bangladesh s self-belief and confidence. The team will now feel that no task is beyond it, that if it plays to its potential, it can get the better of anyone. It is this attitude, this fearlessness and an uncluttered mindset that the team must take into the semi-final shootout against India.

Bangladesh and India have done numerous battles in the past and India has largely had the better of the exchanges. This time around too, India appear the more balanced, more superior side both in terms of the batting and the bowling. Its openers are in very good touch, and it has a number of match-winners down the order.

I also feel it has an excellent pace attack, perhaps the best in the competition and with loads of variety, as well as a quality spin combine in Ravindra Jadeja and Ravichandaran Ashwin. Especially in the victory against South Africa, it flexed its fielding muscle too, so it would appear as if India has all bases covered and could be a bridge too far for Bangladesh.

However, this tournament specifically has already reiterated that anything is possible on any given day. You can take the opponent lightly only at your own peril, and while I don t think India will give Bangladesh anything but the utmost respect, I don t see any reason why Bangladesh can t come away with the right result.

The important thing from Bangladesh s point of view is to not approach the semi-final either with a sense of a job well done, or with apprehension and nerves, given the stage and the occasion.

My message to the Bangladesh cricket team is simple: it might be uncharted territory, but don t get overawed. Enjoy the game, have fun, focus on the process, and let the result take care of itself.

This was first published on www.icc-cricket.com . 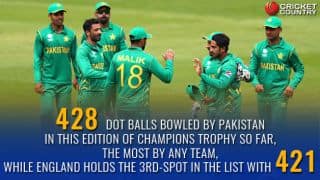