Tendulkar has called Chappell a 'ringmaster' and said he spoiled team atmosphere.

I loved ‘Playing It My Way’. It was one of the most riveting cricket autobiographies I’ve read. The way you addressed tough questions like the match-fixing allegations of 2000 and the controversy with your Ferrari were eye-openers.

I realise that I featured in your book in less-than-flattering terms, but I deserve it. I was unnecessarily hard on you guys. I was so caught up with useless things like fitness and fielding, I didn’t realise pure talent was enough to merit a spot in the Indian team. It’s not like you guys lost a series after dropping the opposition captain, thereby suffering a complete turn in fortune and losing a five-match Test series 3-1 after being 1-0 up or anything.

You were right in refusing my bid to have you captain India at the ICC World Cup 2007 too. Rahul Dravid did a commendable job of it; you guys became the first team to score over 400 in a World Cup match! Never mind that you were beaten by Bangladesh and knocked out of the tournament in the first round.

And of course, my good friend Sourav Ganguly was absolutely correct in saying that Rahul wasn’t able to control me. After all, he wasn’t able to overrule my decision to chuck Sourav out and make him captain. He was completely powerless to stop that.

It really was my fault for being a ringmaster. You were right. You always are.

(Shiamak Unwalla, a reporter with CricketCountry, is a self-confessed Sci-Fi geek and Cricket fanatic. You can follow him on Twitter @ShiamakUnwalla.) 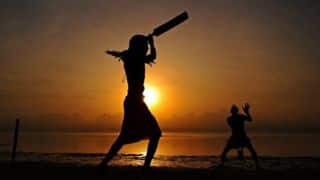