In the MCC Spirit of Cowdrey Lecture 2012, Tony Greig severely attacked the financial focus of the Board of Control for Cricket in India (BCCI). Arunabha Sengupta argues that while there may be merit in some of his arguments, Greig should take a look at the ugly bootmarks that he himself has left on the spirit of the game. 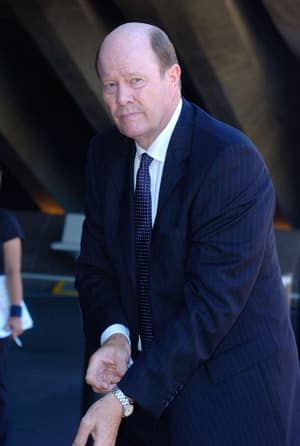 The principle of the MCC Spirit of Cowdrey Lecture is to promote the spirit of the game as championed by Colin Cowdrey and the rest of the old school players. Which makes the very choice of Tony Greig as the one to deliver the address surprising to say the least © Getty Images

In the MCC Spirit of Cowdrey Lecture 2012, Tony Greig severely attacked the financial focus of the Board of Control for Cricket in India (BCCI). Arunabha Sengupta argues that while there may be merit in some of his arguments, Greig should take a look at the ugly bootmarks that he himself has left on the spirit of the game.

In 1974, a 41-year old Colin Cowdrey had been summoned by a desperate English cricket team as an unlikely saviour against the blinding terror of Dennis Lillee and Jeff Thomson.

When he had walked in to bat in the second Test, carrying far more than his share of mortal flesh, Jeff Thomson was scorching the turf with his furious pace. The maestro had amiably walked up to the fire-breathing fast bowler, and offering his hand had said, “I don’t believe we’ve met, Mr. Thomson. My name is Cowdrey.”

Not only did the initials of the great Michael Colin Cowdrey correspond to MCC, he played the game following the platonic model of the traditional spirit of the game.

Unfortunately, neither the initials, nor the rotund form held true for Tony Greig, least of all the spirit.

When Kerry Packer, the Australian business tycoon, created a huge breach in the cricket world with his World Series Cricket (WSC), cricket writer and commentator EW Swanton had famously branded him anti-Christ. While it will be politically incorrect to go that far while considering Packer’s trusted lieutenant Greig, we can definitely draw partial parallels with the antithesis of what Cowdrey stood for.

In the late 1990s, Cowdrey, and another gentleman cricketer Ted Dexter, got together to incorporate this soul and attitude of the game into the laws of cricket. When the 2000 Code of Laws was introduced, for the first time a preamble contained the guidelines for maintaining the spirit.

Cowdrey passed away in 2000. The following year the MCC Spirit of Cowdrey Lecture was inaugurated. An annual feature of the English summer, it has been delivered by eminent figures of the game, from Sunil Gavaskar, Christopher Martin-Jenkins, Clive Lloyd, Adam Gilchrist, Kumar Sangakkara – and even the non-cricketing personality, Bishop Desmond Tutu.

The principle of the event has been the same – to promote the spirit of the game as championed by Cowdrey and the rest of the old school players.

Which makes the very choice of Tony Greig as the one to deliver the address surprising to say the least.

The many connotations of value

Let us turn back and look at another Ashes series, two and a half years after Cowdrey had been called upon to rescue England. In the summer of 1977, while the teams ostensibly battled on the field, Greig, till a while back the skipper of the English side, was far more focused on surreptitiously recruiting the biggest stars of the Test world for the WSC  in London’s Churchill Hotel.

Once the rebel players had joined the Packer circus, Greig led the World XI, filling the slot of the all-rounder. During the two years of WSC, his performance was dismal, especially given that he was playing alongside the very best in business. Greig did confess that negotiating business with Packer and soliciting signatures from the probable recruits to WSC made him something less of a cricketer.

That surely renders him less than the ideal figure to stand pompously on the podium and pontificate about what the approach of BCCI should be, and that “spirit of cricket is more important than generating billions of dollars.”

True, Greig was prudent enough to cover his tracks right at the start with a blanket explanation.  “A quote from the transcript of my meeting with Kerry Packer, five days after the Centenary Test on March 22, 1977, gives the best insight into how I felt at the time: ‘Kerry, money is not my major concern. I’m nearly 31-years-old. I’m probably two or three Test failures from being dropped from the England team. Ian Botham is going to be a great player and there won’t be room in the England Test side for both of us. England captains such as Tony Lewis, Brian Close, Colin Cowdrey, Ray Illingworth and Mike Denness all lost the captaincy long before they expected. I won’t be any different. I don’t want to finish up in a mundane job when they drop me. I’m not trained to do anything. I went straight from school to playing for Sussex. I am at the stage in my life where my family’s future is more important than anything else. If you guarantee me a job for life working for your organisation I will sign.’ “

And, later, he added, “The spirit of cricket is … more important than turning out multi-millionaire players”

Well, the rationalisation sounds terribly like tear-jerking tale of a serial offender pleading insinuating circumstances. His wrongs can be condoned because of his monetary insecurity and lack of talent at an honest trade, but the same flaws cannot be overlooked in his fellow men a generation down the line.

How is it any different for the cricketers of today, apart from the fact that the match fees have been appended by some trailing zeroes? Isn’t the future even more insecure in a world engulfed by financial crisis? Does the competition involved in professional cricket not render players more inadequate than ever for anything but the game?

Greig rattles off bullet points about how WSC was good for the game – and much of it is true – but, only time can tell whether the BCCI approach towards money will have some equally beneficial by-product.

And while it will be imprudent to completely ignore his misgivings, Greig’s own murky footprints have soiled the spirit of the game too irrevocably for one to take him seriously.

Greig, in his time, has jumped on the spirit of cricket with hob-nailed boots, tearing it to shreds for filthy lucre.

The former all-rounder says that WSC allowed him to mix work-wise and socially with a number of Australia’s leading businessmen. This opened his eyes to a world that he didn’t know existed.

Perhaps when he realised that such a world did exist, he did not stop at Australian businessmen – but changed allegiance as he has habitually done with his own citizenship, flitting from one lucrative broadcasting deal to another across countries, the icing on the financial cake being lapped up in India.

And now, with his services no longer required for television assignments in the most financially powerful cricketing country, is it his monetary interests backfiring in an emission of hitherto unknown spirit, discovering values in the cricketing sense rather than currency?

He has voiced: “(the spirit of cricket is) more important than getting square with Australia and England for their bully-boy tactics towards India over the years.”

BCCI’s abuse of financial clout is of course so blatant that it is foolhardy to refute. However, the adopted country that Greig played for and the present one where he resides, have both often made other cricketing nations dance to their autocratic tunes brandishing their thoroughly undemocratic veto powers in the years gone by.

Yes, there are merits in his speech. The points he made about focus on Test cricket are very much valid. The dangers of current day calendars straining with the burden of innumerable Twenty 20 leagues are out in the open for all to see.

However, coming from the six foot six inch frame of Tony Greig, many of the arguments do ring incredibly hollow.