Cook's career is not the kind you aspire from the confines of cosiness. It is the sort that catapults you towards maturity they have always associated champions with.

Alastair Cook will never stride out to bat again, not for England. That much, we know. Eulogies have been written about the man, more so because England have not had the chance to prepare for a high-profile retirement: some had gone out with a whimper, some away from the limelight, some others claimed by health

Not Cook. There was nothing left in the tank, he admitted when he quit. Too many splutters, he had realised, much more than there should have been. It was perhaps certainly better to hand over the keys.

The runs had dried up for Cook, but somehow he notched up two enormous double-hundreds amidst all that. There was a solitary half-century six innings after that Melbourne magnum opus, and nine more before he called it quits.

His runs and hundreds and streak of consecutive Tests and goodness-knows-what have been all over print and television channels and websites over the past few days.

They have also talked about his two monumental series: the 2010-11 Ashes, where his 766 runs were instrumental in retaining the urn on Australian soil (no other side has won an overseas Ashes since 2001); and as captain in India in 2012-13, where he took England to a win after 28 seasons, with 562 runs.

They have talked about how Cook defied his obvious limitations as batsman to evolve as England s most prolific scorer by a margin of well over three thousand Test runs. He was unattractive, they have agreed to that, but they could not deny the fact that he was the bolted gate that wore down the battering rams for well over a decade.

They talked about his dysfunctional sweat glands and how they make them persevere at the crease for hours. Cook was at the crease for 570 minutes on debut, about the same in his last outing, and a trillion or so in between. He has batted for over ten hours four times, and over five hours on twenty-six more occasions.

But there has been another Alastair Cook, the personal one, a man who defied all logic to clinch a place in my life.

Only once have Cook and I have been at the same cricket venue together. That was in 2012-13, on the fifth day of a hopeless Test. India were 32 ahead with a solitary wicket standing, but hey, I had got box passes, and the complimentary lunch at Eden Gardens is something to be savoured.

It is another thing that the match got over before lunch.

India added eight. Then Cook had a bizarre innings. He inside edged the first ball. Once he got the strike back, he kept out two more balls. Then he suddenly stepped out like there was no tomorrow to a ball reasonably wide and was stumped.

Before that, in the series, he had kept out over a thousand balls, batted for over twenty-five hours, and had scored three hundreds without a single lapse of concentration (perhaps there were a couple, but not significant enough to remember). That shot was so uncharacteristically extravagant that it seemed arrogant, almost rude.

My first Cook memory, however, is as old as the man s Test career. I was in a largely cricket-agnostic nation in a different continent at that point. There was still little coverage of cricket there; worse, the time zones were ridiculous in the sense you had to wake up at odd hours and watch the sun rise to watch cricket and work bleary-eyed. Thankfully, the internet speed was outstanding.

Michael Vaughan had been ruled out of the series. The redoubtable Marcus Trescothick had pulled out just before the series for reasons unclear at that point. While they still had Andrew Strauss, they definitely needed a new captain and a new partner for Strauss.

Even then nobody had noticed Cook. The focus was on Monty Panesar, and you cannot blame media for that: a Sikh making Test debut against India on Indian soil was obviously the one they went after.

The first role went to Andrew Flintoff. Years later, I read that Matt Prior was Cook s only competition for the run-in to the second.

The match could have been a classic, had India began their fourth-innings onslaught earlier. They did not, keeping in tone with the dour nature of the Test: earlier in the match, Mohammad Kaif and Anil Kumble had added 128 for the eighth wicket to help India inch closer to England s first-innings total.

Amidst all that, I remember, there was more grit, serious, hard-nosed grit, from the fresh-faced, wide-eyed (literally) boy, whose arrival had somehow got buried under the Panesar hype. Bowling to him was the Indian debutant S Sreesanth, a man as opposite in nature to Cook s as you can think of.

Cook arrived with a pulled four. It was not your conventional pull: he swivelled his body and got in top of the ball to play it fine. Sreesanth steamed in harder and bowled faster, and Cook kept pushing back, sometimes for fours, sometimes for ones, at times for nothing, but he generally middled.

The most amazing shot of the innings, I remember, came off Kumble, no less. There was a mid-on and a mid-wicket for Cook, but they were bisected with the precision of a veteran. There was no beauty in that, but there was precision the kind you are unlikely to pull off outside geometry classes.

He scored 60 off a lot of balls. It was not a pretty innings (of course, that is subjective), but it was an important innings. The steely chin that clashed severely with that boyish face had lived up to its potential.

He scored 104 not out in the second innings, at a strike rate of 43 when he should have scored at 55 or so runs that looked glacial when Kevin Pietersen blasted his way to a dazzling 87 at the other end. England were, after all, in the lead, pushing for a win

It was a wrong innings in many ways. It was a slow innings, punctuated by gloomy, reluctant fours. The pace of the hundred prevented Flintoff from declaring on the fourth evening.

It was not an attractive hundred by any standards. It was, however, a coming-of-age Test debut hundred, where you are thrown to the wolves on a turning track after the stars had opted out.

It was not what schoolboys dream of. But ask any boy hauling kit in a crowded bus across a dusty suburb after a gruelling day at the nets, and you will find his dreams are not significantly different from what Cook did on Test debut; or through his career.

It was not the kind of aspiration you have from the confines of cosiness. It is the sort that catapults you towards maturity they have always associated champions with.

I found a favourite cricketer that day. Thankfully, he stayed with me for well over a dozen years, and as many thousands of runs. 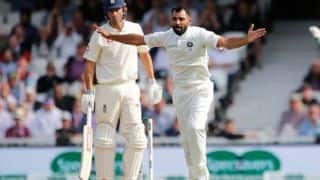