Hanif Mohammad, supreme grafter who knew no fatigue, the man synonymous to Pakistan cricket for decades and a legend we never got to see but have read sheaves about, is no more.

We were relieved, for Shoaib Mohammad, the son of the legend we had grown up on, had confirmed that Hanif Mohammad was still alive. Given his unflappable concentration and determination, it was not surprising that Hanif would defy that greatest force of all despite being taken away for six minutes. But Death was too formidable a foe for even the legend. Indeed, Hanif Mohammad, supreme grafter who knew no fatigue, the man synonymous to Pakistan cricket for decades and a legend we never got to see but have read sheaves about, is no more.

Growing up in India in the Doordarshan era meant that you never actually got to watch international cricketers, let alone those who had hung up their boots. You had to rely on books and magazines, and the occasional, very occasional newspaper clipping.

Despite the limitations, Hanif Mohammad somehow grew on me. I found out he had scored a painstaking, match-saving 970-ball 337 at Kensington Oval; I realised he was easily the greatest opening batsman in the history of Pakistan cricket; and I got to know he held the world record for highest First-Class score, of 499.

I was not happy when Brian Lara broke Hanif’s record of 499. Lara already had the Test record, just over a month before. It was not right for him to have both. I could not explain why, but it somehow felt wrong. It was irrational. I was irrational. Maybe I still am.

I collected as much information on Hanif’s 499 as possible. I found out that he had beaten a world record set by Don Bradman. It was because of a scoring error that he had to risk a run and get out in the process.

That he fell a single run short of the 500-mark did not seem cruel, for Bradman, the man whose record he had broken, also had that iconic blemish of 99.94. It seemed right, Bradman and Hanif, 499 and 99.94, a pair of near-misses studded with 4s and 9s.

Bradman had sent a congratulatory telegram to Hanif. When Hanif toured Australia, the two little men met. Bradman was surprised when he found out that the man who broke his record had a frame that tiny; he had, by his own admission, expected an imposing hulk.

With time I got into quizzes. I do not remember exactly when I came across the piece of trivia, but somehow it made me very excited that Bob Woolmer was an eye-witness to both Hanif’s 499 and Lara’s unbeaten 501.

But that is about the 499. What of the 337? West Indies piled up 572 for 9 and skittled out Pakistan for 106. It was the third morning of a six-day Test. A draw seemed improbable, even unreal.

But Hanif believed. He dreamed. And he batted. The first four stands he had were all in excess of a hundred. He had batted for 970 minutes (999, by his own claim).

Take a moment to let that sink in: Hanif batted longer than two 50-over matches, intervals and prize-distribution ceremonies included, put together.

An enthusiastic Bajan youth was having an excellent view of Hanif’s marathon from atop one of the palm trees surrounding the oval. He fell down, probably from fatigue, probably from exhaustion; nobody knows why. When he gained consciousness in a Bridgetown the first question he asked was “is Hanif still batting?”

“Yes,” they nodded. And the poor boy passed out again.

The story is probably apocryphal, but it grew on me as I got older in the pre-internet era.

Hanif was called Little Master before the world had heard of Sunil Gavaskar. Curiously, that was not a moniker even Bradman had enjoyed.

Even when Saeed Anwar came across they never called him greater than Hanif. Neither was Majid Khan. They were probably more talented, but Hanif’s determination was on another planet.

Back in those days, you chose your heroes without caution, but they were always men you got to see, or someone larger than life. Not a short man with innocent eyes who batted on and on and on. Not someone whose poster you never had a chance of finding in the stalls.

I have had heroes, many of them. But even in the YouTube era, when films of WG Grace and KS Ranjitsinhji and Jack Hobbs have been dug up from archives, Hanif remains the only one I never got to see bat.

That probably added to the fandom — of a man in a different country across one of the most fought-for borders — of a man that existed only in photographs and text, and, well, in videos of old age.

Hanif was born in one of the two great cricket families of Pakistan. His mother Ameer Bee was a badminton champion in undivided India. The family moved from Junagadh after Independence and Partition.

Big brother Wazir played 20 Tests and was one of Hanif’s four hundred-run partners during his 337. Raees, the next, stood 12th man in the first Test on Pakistan soil.

Mushtaq, the greatest Pakistan all-rounder before Imran Khan, played 57 Tests and led them with some success. Sadiq played 41 Tests as well, opening batting with Hanif as the senior man’s career approached an end.

The legacy did not stop, for Hanif’s son Shoaib took over the baton in more ways than one, playing 45 Tests. The diminutive, dour, dogged Shoaib was the closest our generation got to see of Hanif, because old-timers kept writing that Shoaib was too Hanif in his approach to batting, more so after that mind-boggling 12-hour, 516-ball 163 at Basin Reserve against Richard Hadlee.

And now, Shoaib’s son Shehzar is safe behind the stumps…

But there was more. With age I found internet, which helped me question a few myths and changed several things I believed in. Thankfully, nothing I knew of Hanif’s greatness came down with a crash.

Hanif Mohammad had played in Pakistan’s first Test. scored 3,915 runs at 43.98 from 55 Tests with 12 hundreds. The numbers were more acceptable than phenomenal, but… what about the fact that none of his teammates played even 40 Tests till his retirement (and no Asian had as many Test runs)? Barring Saeed Ahmed none of them averaged more than 40, either.

Hanif scored at least 2 hundreds against every country he played, and at least one hundred in every country. Again, these are remarkable statistics, and while they do not prove a point, it can probably be assumed that Hanif could have done reasonably well against all attacks.

In fact, barring England, he had been successful in more or less every nation, and he had managed to handle the English attack at home.

Peter Oborne and others have mentioned him shaken by Roy Gilchrist, but despite the fact that he was apparently not the same batsman anymore, the runs never stopped.

Captaincy had suited Hanif, for his 11 Tests fetched him 881 runs at an outstanding 58.73, including averages in excess of fifty against every country he took on.

Abdul Hafeez Kardar, that great patriarch of Pakistan cricket, had sent multiple notes to Hanif during that mammoth effort, all carrying the same message: “You are our only hope.” 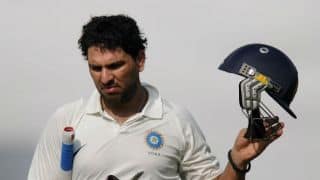