Going into the 2017 edition, the writing is there on the wall: in what could be their final appearance in IPL, Gujarat Lions are all set to go out all guns blazing.

Having won bids for the two new IPL franchises for as many years, the respective owners were not expected to be carrying high hopes. After all, several teams that have trudged along for years in the treacherous lanes of IPL but have not achieved the ultimate goal. To compete with the seasoned IPL houses and to emerge at the top looked next-to-impossible, especially when there was so much to be done: from arranging the squads to the support staff and even getting logistics in place. But to the surprise of many, Suresh Raina s Gujarat Lions (GL) marched into the business end with an ease rarely been in the case of a few other teams.

Despite two of the fiercest cricketers in Virat Kohli (Royal Challengers Bangalore) and David Warner (Sunrisers Hyderabad) commandeering their sides towards the final destination, Gujarat Lions at least won the first round when they finished at the top of the IPL 2016 points table. However, the trait of inconsistency shown by Gujarat earlier in the tournament came back to bite them hard, and they dropped off the competition as spectacularly as they had hogged the limelight. In the business end of IPL 2016, Gujarat Lions failed in both and bowed out.

One of the most undesirable facts associated with Gujarat Lions is the comparisons with now-defunct Chennai Super Kings (CSK). This is probably unfair, since the Lions have neither MS Dhoni nor Ravichandran Ashwin, giants on whose shoulders the fortune of CSK has often rested. Comparisons invariably take place on a consistent basis. However, fans cannot be blamed entirely for this; Gujarat Lions displayed the sheer ruthlessness with which Chennai Super Kings (CSK) for years.

Gujarat Lions won 9 out of their 14 league matches in IPL 9. In the business end they were beaten once each by Royal Challengers Bangalore (RCB) and Sunrisers Hyderabad (SRH). In a way,

Squad strength: Gujarat Lions look prepared to go the distance. They have not tinkered with their squad a great deal. Dale Steyn s shoulder injury will keep him away from IPL 10, but the Lions are not likely to feel the pinch of his absence. Munaf Patel, Basil Thampi, Manpreet Gony and Nathu Singh are among the latest additions to the bowling ranks of Gujarat Lions; let us not forget that they already have the likes of Dhawal Kulkarni, Praveen Kumar, Andre Tye and Pradeep Sangwan.

Gony recently finished fifth in the list of highest wicket-takers in the Inter-State T20 Tournament, grabbing 10 wickets at 12.40 for Punjab. Shubham Agarwal, who was also picked in the auction, was not too far behind. Rather, he was tad impressive with 9 wickets in 5 matches at 9.88.

Almost all the bowlers that Gujarat picked for IPL 2017 have had sufficient. Kerala s right-arm medium pacer Thampi claimed 8 wickets in 5 games in the same tournament.

While Dwayne Bravo and James Faulkner are remembered for their massive sixes, they have also been extremely successful with their variations with the white ball; they are time-proven match-winners in individual capacity.

The spin department, too, does not look brittle despite IPL hero Praveen Tambe being released ahead of the auction. Ravindra Jadeja will lead the department, while Suresh Raina is also more than a handy spinner. GL also have Shadab Jakati and the mysterious Shivil Kaushik in their ranks who went on to hone his bowling skills in the English County circuit after last IPL. As far as variation is concerned, Tejas Baroka is a leg-spinner providing further dimension to that bowling line-up.

The presence of Jadeja and Raina who can act as spinners gives Gujarat Lions a great opportunity to deck up their batting line-up, whose firepower went several notches higher with the inclusion of Jason Roy.

This, perhaps, could be the biggest dilemmas this time: Gujarat Lions have acquired three explosive openers; whatever combination they decide to go ahead with, their firepower will not even come down a bit. They have Roy, Brendon McCullum and Aaron Finch and if that was not enough, they also have a fourth option in Dwayne Smith.

The middle-order is as strong, since it contains Raina. Dinesh Karthik has been in red-hot form this domestic season, with 607 runs at 86.71 in the Vijay Hazare Trophy and 247 runs in 3 matches at 82.33 in the Deodhar Trophy. He finished a fabulous 126 in the final to propel Tamil Nadu to the title win.

Among overseas players, Lions also have Chirag Suri, the first-ever cricketer from UAE to be acquired by an IPL franchise. Suri was brought into auction after their coach Brad Hodge was left impressed with him during the Master s Cricket League (MCL) first edition.

In the Vijay Hazare Trophy, Pratham Singh got starts almost every time but could not score more than a fifty. Gujarat also have in their ranks Jaydev Shah, the son of former BCCI Secretary Niranjan Shah.

Dhawal Kulkarni was the best bowler for Gujarat Lions in the last edition:

Venue: Rajkot will remain Gujarat Lions home ground. The venue was recently added in the list of Test playing centres. The wicket at the Saurashtra Cricket Association Ground is expected to be full of runs, and Gujarat s batting-heavy side is likely to make a winning start once again to their IPL campaign.

Future: As per what was decided, when CSK and Rajasthan Royals (RR) would have completed their two-year bans, they will return. So, this season, effectively will be the last for Gujarat Lions and Rising Pune Supergiant. Gujarat owner Keshav Bansal told Ahmedabad Mirror: As we all know BCCI is undergoing a change of guard. Once their elections conclude, we will be in a better spot to take our case further with the BCCI. Right now we are focused on lifting the IPL and if we manage to win we can make a strong case before the BCCI. Actions will speak louder than words here. 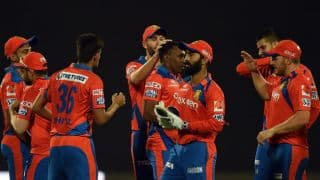