India has not produced an Arthur Mailey or a Frank Tyson.

Indian cricketers have authored books, but let us be honest here: few Indian cricket books can match up to the best of the rest. Rusi Modi had been brilliant at times, Tiger Pataudi’s Oxford education showed, Sunil Gavaskar was perhaps the most consistent over time, and Aakash Chopra has surpassed them all in quality. However, India has not produced an Arthur Mailey or a Frank Tyson.

The Indian journalists and authors have somewhat made up for them: be it Ramachandra Guha or Rohit Brijnath (perhaps the greatest Indian sport writer, though without a major cricket book to his name) or Mihir Bose, they have produced books. Rahul Bhattacharya also deserves a mention, though he can be probably be called a one-book wonder (Pundits from Pakistan is second to none in quality) when it comes to cricket writing.

This brings us to Guts & Glory. The first thing you notice when you read the book is the love and care with which Makarand Waingankar has written the book. The book deals with 26 Indian cricketers (from Pataudi to Shikhar Dhawan) distributed over 12 chapters. The chapters are different from the usual narrative: for example, in the one involving Mohinder Amarnath and Dilip Vengsarkar (they are pooled together because of their guts, spirit, and toughness), Waingankar oscillates between the two men, thus describing two careers together with seamless ease.

The other aspect of the book is Waingankar’s unique unbiased approach towards writing. He does not want to influence the reader: he places facts and quotes (mostly from greats of the sport) on the men in question, allowing the reader to make his own judgements.

The book is also full of delightful anecdotes. The chapters on Pataudi and ML Jaisimha, and on Dilip Sardesai and Ajit Wadekar, are extremely interesting. The comparisons between Gavaskar and Gundappa Viswanath, between the Indian spin trinity of the 1970s (to borrow a Guha term), and between Anil Kumble and Harbhajan Singh are intriguing. Once again he relies on quotes and facts and does not aim at blurring the reader’s view.

Having said that, some of the chapters (especially those on the more recent cricketers) do seem a bit biased and hurried. There are also some factual errors (MS Dhoni’s performance in Bangladesh, for example, did certainly not “put the best of fantasy writers to shame”), but all in all, it is a delightful read. Adding to the fun experience is a collection of 26 brilliant caricatures by Austin Coutinho.

Go and buy it. You will be happy. 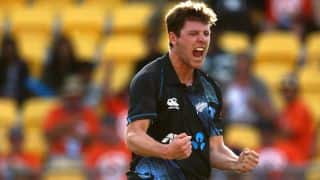