In a major embarrassment to the “Intolerance Brigade” and relief to the Modi govt, Pakistan’s chief terror kingpin — Hafiz Saeed has declared India “the most tolerant nation worthy of the highest respect”.

In a major embarrassment to the “Intolerance Brigade” and relief to the Modi govt, Pakistan’s chief terror kingpin has declared India “the most tolerant nation worthy of the highest respect”.

“We MUST give up on Kashmir now!” roared a rabid Saeed to a packed (pun unintended) hall in Lahore. “We have to be grateful to the BCCI for offeringPakistan the chance of a bilateral series with them. Pakistan’s only claim to “respectful” activities in the whole world is cricket, and by BCCI’s benevolence, PCB(Pakistan Cricket Board) will be saved from penury. We teach our schoolkids to hate India, we screw their economy by pumping in fake currency, we sneak in terrorists and vocal atrocities such as Atif Aslam, we even butcher their soldiers and people on a regular basis. But their all-tolerating cricket board is ready to play with us, anytime, anywhere, even though neither their government nor their public are keen. See how wrong we were about Indian businessmen? Of course, their BCCI will make some chillar money side-by-side, but that’s never their intention, is it?” said the don, his tone gradually morphing from that of a rabid dog to a whimpering pussy as he poured his heart out.

The “intolerance brigade” in India seems to be stunned into silence by the certificate of of tolerance issued by Saeed. No mention of that word has been found in any edition of today’s newspapers or news channels. When contacted, most of them declined to comment, saying they are in a mode of “deep contemplation”. Last heard, the gang was plotting to accuse the Bihar Governor of intolerance over the their handling of the Deputy CM of Bihar’s basic reading and comprehension skills.

Even after Hafeez’s certificate of tolerance, Aamir Khan has refused to put his feet into his mouth, saying he won’t tolerate anything  that doesn’t make him look like a “perfect” buffoon (pun unintended) when he does it.

Meanwhile, Rahul Gandhi’s talk in Bengaluru was cut short by an immensely tolerant lady standing behind him on the dais. As soon as he started saying (with generous help from his notes): “It’s a shame on the present government that our honorable citizens like Mr Hafeez have to certify India’s tolerance. Do you agree, or not…,” the alert girl seemed to whisper gently into his ears: “Sir, Hafeez is a Pakistani citizen, not an Indian”.

(Reported by Citizen Satirist Vinita Krishnamurthy. The above article was Originally published in UnRealtimes)

Umar Gul : "My sole aim is to make a strong comeback for Pakistan" 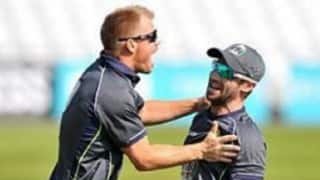 Clarke, Warner, Smith and other cricketers pay tribute to Phillip Hughes on birthday