Hammad Azam's name was missing after the PCB announced its ODI squad for the series vs Sri Lanka.

The Hammad Azam career story has an element of a Bollywood tear-jerker in it. A supposedly gifted individual mistreated by the Lords of cricket and left in the wilderness to fend for himself! Whether in real life Hammad’s story will have a happy ending or not, is another story in itself.

The score as it stands for Hammad is that he has so far played 11 One-Day Internationals (ODI) and five Twenty20 Internationals (T20I) for Pakistan. Curiously enough, he has not been asked to bowl at all in the T20Is where he has scored 34 runs. In his latest outing for Pakistan against the touring Zimbabwe side, he faced only twelve balls and bowled eight overs in three ODIs. His reward for this effort is exclusion from the Pakistan ODI squad announced for the series against Sri Lanka.

The 24-year old all-rounder now finds him out of favour with the selectors, and in an exclusive interview with PakPassion.net, he spoke about his disappointment at missing out on another opportunity to further his career and serve Pakistan. READ: Pakistan announce 16-man ODI squad for Sri Lanka ODIs

From Hammad’s point of view, apart from the shock of not seeing his name in the sixteen member squad, it is the uncertainty and inconsistency of his selection which troubles him the most as he stated: “It’s surprising and disappointing to be dropped from the Pakistan one-day squad, especially having only played in three one-day internationals recently.

“I was hoping that after being recalled I would get a decent run in the team and be given a proper chance to prove myself this time. As everyone knows, if you want to establish yourself in any format in international cricket then you really need a decent run of games and that helps your confidence and performance. If you don’t know whether you will get another chance to play for your country or not after the current match, then that does add pressure on you and doesn’t help your confidence at all.” READ: Pakistan players will get fresh central contract from PCB

Given the amount of near-misses and false dawns that he has faced in his quest to establish himself in the Pakistan team, one would expect him to be very downbeat about his future. Whilst Hammad does regret the lost opportunities, he remains committed towards working his way through yet another crisis in his career.

“That’s the way it goes in sport sometimes, the unexpected happens and you have to get on with it and try to get it out of your mind and move on. I have to move forward, get my mind ready for this domestic season and try to impress the selectors once again and hope they will give me another chance. I won’t give up or feel sorry for myself, the onus is on me to knuckle down and get runs and wickets under my belt and to impress the selectors.

“Yes it’s fair to say that my international career has been a stop-start affair. Sometimes that has been down to being dropped, and injuries at times haven’t helped either. It’s been frustrating and to perform at your best in international cricket, you need a run of matches so that you can show what you have to offer and so that you can build your own confidence and feel that you really are part of international cricket. That is yet to happen for me, but who knows maybe at some point in future perhaps I will get a run of matches.”

Like millions of his countrymen, Hammad Azam was delighted with the return of international cricket to Pakistan with the visit by the Zimbabwe international team. He must have also been very excited at being selected to represent his country on such a momentous series and probably assumed that this was also the beginning of a new phase of his career. Whilst Pakistan did successfully host the series and duly won the matches, the outcome for Hammad is nothing close to what he expected.

“Let me start by saying that it was good to be part of the team in a historic series. I hope that international cricket returns to Pakistan on a permanent basis and that fans and players get the chance to watch and take part in home international series.

“I was honored to have the chance to play international cricket in Pakistan, which of course was the first series in six years at home. It’s hard to describe just how much it meant to be playing for Pakistan in front of our home fans. Of course I would have liked to have done better with both bat and ball against Zimbabwe, but I only batted once and only bowled eight overs in the three matches.”

To his credit Hammad Azam will continue to make efforts to impress selectors with all that he has in his power, namely the willow and a cricket ball, but one can only hope that the powers that be afford him the chance that he so fairly deserves. Pakistan has the need for a good batting all-rounder and if Hammad is the answer to this quandary, then the PCB should look to seriously consider him for this role by allowing him opportunities as and when they arise. Anything short of that will be a travesty. 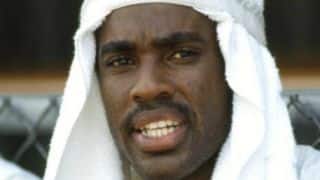 Gus Logie wins Man of the Match for fielding 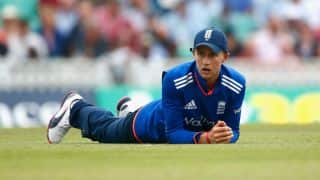