Forty-nine years ago, Curtly Ambrose was born on this date. Sixteen years later, Chris Gayle was born on the same date. Abhishek Mukherjee looks back at one of the last torch-bearers of the West Indian fast bowling legacy and one of the most destructive batsmen in contemporary cricket. Forty-nine years ago, Curtly Ambrose was born on this date. Sixteen years later, Chris Gayle was born on the same date. Abhishek Mukherjee looks back at one of the last torch-bearers of the West Indian fast bowling legacy and one of the most destructive batsmen in contemporary cricket.

Curtly Ambrose
It’s hard to believe that Curtly Ambrose had taken up football and basketball as a kid and had avoided cricket because it was “too long” and “took up a lot of energy”! Yes, he occasionally played tennis ball cricket in Swetes Village and had even ended up representing his school, but did nothing significant. He loved the sport, followed West Indies around the world on his transistor set, but that was all.

Then, suddenly, at 21 – an age when Archie Jackson had played his last Test and Sachin Tendulkar had amassed gazillions of runs in the two formats of the sport available to him then – Ambrose decided he would take fast bowling somewhat seriously. He represented his village at 21; Antigua and Barbuda at 22; Leeward Islands at 23 (along with some major Test stars, including Viv Richards); and West Indies at 24! Twelve years later he was out of the sport forever – just like that.

He was a man like that. He began on his own terms, at an incredibly matured age. He quit on 98 Tests, not waiting for the 100-Test mark. At that point of time Ambrose was still at the peak of his form (in his final series in England he took 17 wickets from five Tests at a measly 18.64), and was the fifth-highest wicket-taker in history. Of all the bowlers with 400 Test wickets, Ambrose has the best average (20.99), the best economy rate (2.30) and the second-best strike-rate (54.5) after Glenn McGrath. In fact, of all the bowlers with 200 wickers, Ambrose is marginally behind countrymen Malcolm Marshall (20.94) and Joel Garner (20.97).

He was tall; he was fast; he was mean; he was ruthless; he was aggressive. He never gifted a single run away. He extracted steep bounce from a good length. And just like his predecessor Garner, he was almost impossible to score from, since they were delivered from a staggering height. It is well-known that with Courtney Walsh, Ambrose formed one of the most productive new-ball pairs ever, taking 412 wickets between them in the 52 Tests at an average of 22.10 in which they had shared the new ball. However, what generally went unnoticed was the fact that during the brief period in which Ian Bishop was fit, Ambrose and Bishop had even more menacing numbers: 196 wickets from 23 Tests at 18.96.

When South Africa made their Test comeback in 1991-92, they probably did not realise the actual strengths of their illustrious opposition. Indeed, West Indies had left them a target of only 201 for a victory. After Ambrose had removed the openers cheaply, South Africa had ended the fourth day at 122 for two even. On the fifth day they could add 26 more runs – Ambrose had figures of 24.4-7-34-6 to go with Walsh’s 22-10-31-4. The Springboks were routed.

Early next year, with West Indies going into the fourth Test against Australia trailing 0-1, Ambrose struck gold at Adelaide; he took six for 74 to bowl out Australia for 213. And then, with the hosts chasing 186, Ambrose took four for 46 to help West Indies clinch victory by a solitary run.

In the next Test at Perth, with Australia going smoothly at 85 for two, Ambrose bowled what was possibly the spell of his life – he took seven wickets conceding a single run to bowl out Australia for 119. They never recovered, and lost the Test by an innings, and along with it the series.

In the 1993-94 series at Port-of-Spain, when England went out to bat on the fourth afternoon, they found themselves chasing only 194 for a victory. Ambrose had earlier taken five for 60. And on the fourth afternoon, he simply ripped the English line-up apart. Ambrose and Walsh bowled unchanged, Ambrose taking four of the first five and six of the first eight wickets to fall. He finished with six for 24. England were all out for 46.

He never toured India; but of all the other countries, his average was the worst in Pakistan – 15 wickets from five Tests at 25.20 – a number that can only be regarded as phenomenal. And even in the shorter version Ambrose had 225 wickets from 176 matches at 24.12 with an almost ridiculous economy rate of 3.48. Remember, this was the 1990s, which meant that the field-restrictions and bouncer-restrictions were already in place.

In a heated encounter in a World Series final at Sydney in 1993, Dean Jones famously asked Ambrose to remove his white wristbands on the grounds that it was camouflaging the white ball. Ambrose removed them, took five for 32 and won the match for his side.

After famously ringing the bell on her balcony 630 times (once for every international wicket her son took), Hille Ambrose finally came to a halt in 2000 – her 6’7″ son didn’t. He plays guitar in a reggae band called “Big Bad Dread and the Baldhead” with Richie Richardson. He has been inducted into ICC’s Hall of Fame; and remains one of the legends of the game. Watch the 17 dismissals of Michael Atherton, if you have doubts!

Chris Gayle
Henry, Carl Anderson’s famous comic character, seldom spoke a word and was virtually devoid of all human expressions. It is, thus, very appropriate that Chris Gayle’s middle name would be Henry: the dark shades and vacant expressions are essential components of the aura of the 6’5″ man.

Gayle’s 6,603 runs at 42.32 make a decent reading, but not an outstanding one. Of his 14 hundreds, two have been triple centuries, making Gayle only the fourth Test cricketer to have achieved the feat, after Don Bradman, Brian Lara and Virender Sehwag. The staggering tally of 961 fours and 82 sixes mean that 65.66% runs of his career have come in boundaries. He had scored a 79-ball hundred at Cape Town and 2004, and had then gone on to better it by scoring one off 70 balls at Perth in 2009-10. In the previous Test at Adelaide, he had carried his bat to score an unbeaten 165 out of a team score of 317, his seven-and-half hour vigil saving the Test for West Indies. The following year, he batted close to 11 hours for his 333 against Muttiah Muralitharan and Ajantha Mendis at Galle.

However, it’s the shorter versions of the game where he has really thrived: 8,360 One-Day International runs at 39.43 and a strike rate of 84.45 with 20 hundreds, including three 150s. He is one of the most ruthless bludgeoners of the modern game. It’s impossible to believe that the man with the almost robotic face and the perpetual glasses could launch assaults of such furious orders. Add to that 156 wickets at 35.08 and an economy rate of 4.73, and he is right up there with one of the best all-rounders in the history of ODIs.

Additionally, Gayle had gone on to score the first Twenty20 international hundred ever in the first ever World Cup Twenty20 international match – his 57-ball 117 had remained a Twenty20 International record – till Richard Levi scored 117 not out. Gayle has a strike-rate of 143.91 and has hit almost two sixes per innings. These numbers show how indispensable Gayle is in the shortest version of the game.

His long strides, dangling arms, high backlift, amazing hand-eye coordination, clean, hard-hit strokes and cool, ruthless demeanor make Gayle one of the most feared batsmen in contemporary world cricket. At 33, Gayle probably still has a few years of cricket left in him. And if the sponsorship and other issues with the West Indian Cricket Board are eventually sorted out and Gayle regains his position in the squad, he will continue to torment bowlers all over the world once again, and possibly help restore some of the pride West Indies’ cricket has lost over the past decade or so. 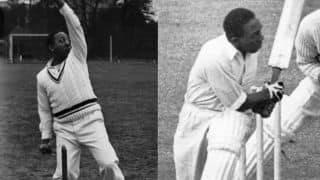 Baron Learie Constantine: A grandson of slave's amazing journey in life to earn the title of Baron