Virat Kohli will lead India in the first Test against South Africa at Mohali on his birthday.

Virat Kohli, born on November 5, 1988, is one of the finest cricketers that India has ever seen. Kohli made his debut on August 18, 2008 against Sri Lanka, Kohli so far scored 6,824 One-Day International (ODI) runs and is currently the captain of Indian Test cricket team. Kohli has been the hero of many important matches for India and is looked upon as one of the most talented batsmen of the modern era. On his birthday, Paulami Chakraborty lists 10 of his knocks that stand out and seek more appreciation than his already outstanding international career. Scorecard: India vs South Africa 2015, 1st Test, Day 1 at Mohali

One of the mentionable knocks during his early days has to be the 104-ball 79 that he scored against West Indies in the ICC Champions Trophy 2009. When the whole top-order collapsed, Kohli remained unbeaten coming to bat at No. 4 and had with 9 fours and 2 sixes punctuating his innings helping India win their only match in the tournament. India lost the series, but found a dependable batsman who could perform when needed. Kohli then scored his maiden century at Eden Gardens later that year. Full Updates: India vs South Africa 2015, Day 1 at Mohali

116 off 213 against Australia in Adelaide Oval

Kohli’s maiden Test hundred when the team needed it the most, which made it even more special. It was the fourth Test of the Border-Gavaskar 2011-12. Australia had put up a massive score on the board courtesy of a couple of double hundreds from Ricky Ponting and Michael Clarke. Chasing an improbable target, Indian top-order failed miserably. Kohli, who came out to bat at No. 6, kept his cool and scored 116 off 213 balls. He remained the only one in the Indian side who reached the triple digit. Though India lost the match by a huge margin, Kohli’s efforts were commendable. READ: Happy birthday Virat Kohli: India’s Test captain turns 27

133 off 86 against Sri Lanka in Bellerive Oval, Hobart

In the Commonwealth Bank tri-series featuring Australia and Sri Lanka, India needed to score 321 in 40 Overs to have a chance of making it to the final. After the top-order failed miserably, Kohli, walked out to the crease at No. 4, played a brilliant knock of 133 facing only 86 balls. He scored 16 boundaries and a couple of sixes as India won the match by seven wickets with 13 overs to spare.

105 off 135 against New Zealand in Basin Reserve, Wellington

India were touring New Zealand for a two-Test series and had already lost the first one. In the first innings of the second Test, New Zealand were dismissed for a low score of 192 and India replied with 438. But in their second innings, New Zealand saw their skipper Brendon McCullum score 302 that helped them reach 680. Indian top order added salt to the wound as both the openers were dismissed for single digits. Kohli, who came out to bat at No. 4, stayed in the crease and was instrumental as India scored 166 and the match ended in a draw. Kohi’s unbeaten ton eventually saved the match for the visitors. READ: Happy Birthday Virat Kohli: Tracing the growth of a superstar

185 off 148 against Pakistan in Sher-e-Bangla Stadium, Mirpur

Kohli made his career best ODI score during the Asia cup 2012 against Pakistan. Pakistan had put up 330 on the board. Opener Gautam Gambhir departed for a duck. Kohli came out to bat at No. 3 and built partnerships with Sachin Tedulkar and Rohit Sharma, which ensured India’s victory, with Kohli ending up as the man of the match.

72 off 44 against South Africa in Sher-e-Bangla Stadium, Mirpur

Facing the Proteas in Semi Finals of ICC World T20 2013, India had to chase down 172 runs in their 20 overs. While both the Indian openers departed for low scores, Kohli remained unbeaten at 72 and steered the victory India’s way. The innings was punctuated with 5 fours and 2 huge sixes and he was awarded the Man of The Match for his match-winning knock. READ: Kapil Dev: Virat Kohli, MS Dhoni too early to compare in terms of captaincy

115 and 141 against Australia, Adelaide Oval

After an ordinary series in England, Kohli made an inspirational comeback as he started off his Test tour against Australia with a century at Adelaide. Australia had posted 517 runs in their first innings and India replied with 444. It was a team effort but Kohli, who was also the skipper for that match, was the only one to hit a century. He scored 115 in the India’s first innings and 141 in their second but couldn’t save the match as Australia won it by a narrow margin.

Australia were touring India for a 7-match ODI series. Winning the toss, Australia chose to bat first and with what can be called a perfect team effort, they put up a good 359 runs. India started the chase positively as Australia got their first breakthrough after India reached 172 when Shikhar Dhawan departed for 95, Kohli scored a stunning 52-ball 100 and along with Rohit Sharma inched India closer to the victory. The innings had 8 fours and 7 sixes in it. READ: Virat Kohli: Fastest to score 1,000 runs in T20 Internationals

The pitch that has stunned many stalwarts with its eerie bounce saw a brilliant innings from Virat Kohli during the 2012 Commonwealth Bank Series against Sri Lanka. Lankans, with a combined effort, put up a challenging total on the board. Though Indian opener Virender Sehwag departed for 10, Sachin Tendulkar scored 48 giving support to Kohli who played a match saving 94-ball 77.

Under pressure, Kohli scored a brilliant 138 against the visiting South Africa team in Chennai during India tour of South Africa 2015. As both the openers departed without doing much, Kohli stood alone and despite of many difficulties, completed his century and pushed himself to get 138 off 140 balls. He hit six fours and five sixes in the course of his innings and helped India reach 299, which helped Proteas failed to chase down. India levelled the series with the win but eventually lost the series.  READ: Virat Kohli’s first win as Test captain vindicates ‘aggressive’ approach 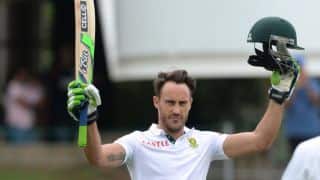