Uthappa finished with a whopping average of 89 during Karnataka’s historic season.

After being dropped from the Indian team in 2008, Robin Uthappa has staged a chest-thumping comeback. Tests, however still elude the player, with selectors stereotyping him as a slam-bam player. R Vishal has more.

After years in the wilderness, Robin Uthappa has made a roaring comeback to Team India after a six-year absence. The elegant Karnataka opener would have liked his reinstatement earlier in the season, but his irresistible Indian Premier League (IPL) 2014 form left the selectors with little choice.

The 28-year old is now a part of the second-string team that will travel to Bangladesh for just three One-Day Internationals (ODIs). Being left out for the lengthy tour of England, though, would have left a bitter taste in his mouth. Much before IPL started, Uthappa went through a stunning run of from that led Karnataka to a unique hat-trick of titles — the Ranji, Vijay Hazare and Irani trophies — in 2013-14.

Uthappa finished with a whopping average of 89 during Karnataka’s historic season and the insightful adjustments in play should have been rewarded. During the time, openers Rohit Sharma and Shikhar Dhawan were going through a torrid run first in New Zealand and then in the Asia Cup.

In an unforgiving battleground with a conveyor belt of talent, first impressions become hard to erase. Uthappa lost his place because of a poor run of form in 2008, and was widely criticised for his flashy stroke-play and constant shuffling at the crease.

Hitting the ball in the air far too often also played a part in his downfall earlier and a few more adjustments created the now impregnable aura of Uthappa at the crease. “People started seeing a difference in the way I tended to bat. You can see I have a big back-lift now, which is not something I used to have. I did have it, but it is not as big as it is right now. It gives me time to play deliveries and I play a lot more with my top-hand right now. I feel I play more correct cricket, which I enjoy. I give confidence to the team with the way I bat right now.” Uthappa added.

Uthappa has also proved that he is more than handy as a glove-man — a role that he was pushed into only a few years ago. He perhaps should have been considered as a permanent cover for MS Dhoni, ahead of the long-standing Wriddhiman Saha.

In the seam and swing of old blighty, Uthappa’s technique scores over Rohit and Dhawan’s. The duo’s struggles away from home are well-documented, and those same demons might resurface against the likes of James Anderson and Stuart Broad. After being pummelled regularly away from the subcontinent, India needed to play all its cards right in the 5-match series. By not cashing in on Uthappa’s run rolling form, they might have just missed a trick.

(R Vishal is a journalist and an alumnus of the Asian College of Journalism. He can be followed on Twitter@vishhell) Hamilton Hamilton: It’s all in the name 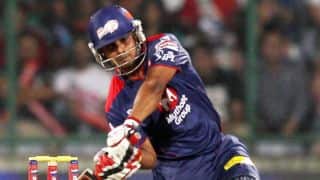