Amla has picked up the knack of amassing a mountain of runs. 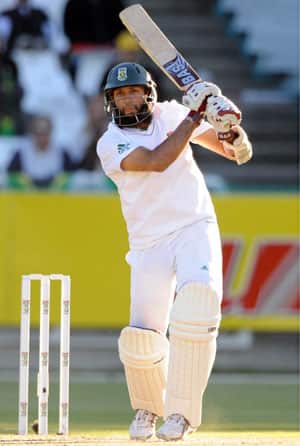 Hashim Amla’s prolific run of form continues as he smashed his second consecutive hundred in the Test series against Australia. Over the years, he has been a thorn in the flesh of quite a few teams as he has picked up the knack of amassing a mountain of runs. Quietly aggressive, the South African lets his bat do the talking and seems to be in an impenetrable bubble of concentration when he is out in the middle. A typical Amla knock is full of elegant strokes which come straight out of the coaching manual.

When South Africa toured India in 2004-05, they picked a 21-year old Amla to play in the country of his ancestors. Little was known about this young player and the only news doing the rounds was that South Africa had selected its first cricketer of Indian descent. The iconic Eden Gardens was the stage for Amla’s introduction into international cricket and he failed to make an impact. He played two more Tests against England at home before being dropped to rectify his shortcomings.

Initially, the general opinion was that Amla had some technical problems which needed attention if he was to make it big in international cricket. His backlift, which came from gully, seemed to have been responsible for his initial struggles. Furthermore, there were occasions when he would be caught on the crease as his bat would come down a shade late. As he result he would find himself trapped plumb in front of the stumps. On other occasions, tentative pokes outside the off-stump would end his stays in the middle.

Amla made a comeback against New Zealand in 2006 and celebrated it with a brilliant 149. That knock assured him that he could play in the big league but those problems hadn’t gone completely. However, as time progressed, one saw him get increasingly better. He started looking more balanced at the crease and would get his bat down in time to meat it with its middle. His game looked more organised as he seemed to have worked on the position of his head. That changed him as a player and his contribution to the South African run tally improved immensely.

Early in his career, Amla was stereotyped as a player for the longer version, but he defied those beliefs and has emerged as a brilliant one-day batsman. Since his debut in the greens for South Africa in 2008, Amla has gone from strength to strength. A strike rate of over 91.98, an average of 55.17 in One-Day Internationals (ODIs) illustrates his worth at the top of the order.

Amla was regarded as a batsman who is fairly consistent, not one who could score in heaps. However, all that changed in India that month when he scored three hundreds in a two-match Test series. Since then, his career average has shot up by almost seven points as he has doubled his hundreds tally in the said period. In this period, he has also piled almost half the runs he scored since his debut till the tour of India 2010.

A few months shy of his 29th birthday, Amla is in the middle of a very productive phase and promises to march on for years to come.

*includes the ongoing Test against Australia at Johannesburg

A comparison of Amla with the modern greats when they were the same age.

At this stage, Amla is very close to where Brian Lara was on his 29th birthday. However, he has already scored four more hundreds than Lara. The others such as Tendulkar, Ponting and Kallis are way ahead as they played a lot more matches at the said stage. Amla has two more Test series’ before his 29th birthday and if he continues to score at his current rate he is likely to pip Lara’s numbers.

As mentioned earlier, he has a very quiet demeanor and goes about his job silently. He isn’t in the media spotlight that often and nor do we see him play too many T20s like some of his compatriots. However, he has runs to show in the formats that matter the most. His graph is moving upwards and that has immensely helped the South African top order. Being close to a great batsman like Lara at a similar stage does speak about his quality and he needs to continue his good work if he wants to finish alongside the West Indian when he decides to hang his boots.

The South African administration has shown faith in him by allowing him to lead the side in the ODI series against Australia in place of the injured AB de Villiers. His calm temperament and sound cricketing sense would make him a good leader. The fact that he was appointed captain of his domestic side at 21 speaks volumes of his maturity and knowledge of the game. Moving into leader’s role may help him get better as it would add responsibility to his shoulders. His temperament allows him to handle pressure situations well and the added responsibility may get the best out of him.

He has said that he isn’t sure about taking the role in the future and would give it some thought. But, a solitary series isn’t enough to judge him as a leader. He may not have performed to his high standards (in the ODI series against Australia) but it would be too early to shut the door on the top job.

South African fans would hope that his best is yet to come!