The Bodyline series had its own light-hearted moments, as what happened with Hedley Verity.

Even the acrimonious Adelaide Test of the Bodyline series was not without its lighter moments. Arunabha Sengupta relates the tale of the teetotaller Hedley Verity’s dalliance with the pleasures of South Australian beer.

Hedley Verity was a serious soul. Not only in cricket, but also in life. In his idle hours, when not plotting the demise of hapless batsmen across the twenty two yards, he could be observed engrossed in TE Lawrence’sSeven Pillars of Wisdom.

His way of life was as immaculate as his line and length. Veritywas an upstanding member of the community, and, unlike most cricketers of his time, a teetotaller. In fact, he was a member of a friendly society in Yorkshire linked to the Rechabites.

In the Bible, Rechab was the father of Jonadab and he refused to drink wine, or build or live in houses, or plant or own vineyards. Modern day Rechabites do not go as far as to forsake brick and mortar buildings and sleep under the skies, but they have maintained their strict code of abstinence from alcohol.

Yet, things had heated up so much during at Adelaide during the infamous1932-33 series, that even Verity felt that he could do with a drink. The cricket had turned into warfare. Harold Larwood’s thunderbolts had struck Australian captain Bill Woodfull over his heart, his bouncer had almost killed the little wicketkeeper Bert Oldfield. Woodfull had accused England of not playing cricket. Angry cables were flying back and forth between the Australian Cricket Board and Marylebone Cricket Club.

Thus, on one evening during the Test match, it was not surprising to find Verity seated in the lounge of RichmondHotel, his walls of restraint crumbling. Seated with him were Tom Goodman of the Sydney Morning Herald, Jack Ingham of the London News Chronicle who was ghosting articles for Jack Hobbs, and Gilbert Mant of the Reuters.Four tankards of delicious ice-cold South Australian beer rested on the table, with alluring droplets forming on the glass.

And just as Verity had taken the first sip of his drink, a waited approached him. “There are three gentlemen waiting outside to see you, sir.”

Verity turned towards him. “Did they say who they were?”

“Yes,” replied the waiter, and the next words shocked the great left-arm spinner to the core. “They’re from the Adelaide branch of the Rechabite Society.”

In the next half a minute, hurricane blew through the erstwhile quiet scene.The cry of anguish from the Yorkshire and England cricketer spurred the pressmen into action. The three made for the darkest corner of the lounge, the four tankards carried between them.

And Verity, with the same guile that had foxed innumerable batsmen, quickly ordered a lemon squash from the waiter as he geared up to face the members of the abstemious society.

Within a minute, three rather gaunt and pallid men with long beards approached Verity. The sight of the spinner with a glass of harmless lemon-squash nestling in his hands must have pleasingly reassured them as they sat talking to him. From time to time, the cricketer cast furtive glances towards the corner of the room where his beer was being guzzled by the three journalists.

One can say that he was home and dry, and he hated every bit of it. 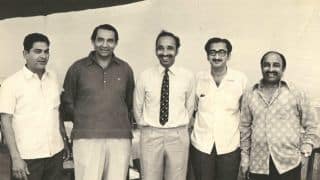