Henry Davids: IPL is the best T20 tournament in the world

Henry Davids: IPL is the best T20 tournament in the world

Davids picked New Zealand and West Indies as the dark horses for the ICC World Cup 2015.

With the Ram Slam T20 Challenge having begun, all eyes are now on the South African domestic sides. Henry Davids of the Warriors talks to Shiamak Unwalla about his team’s chances, the merits of having huge names in the side, and his picks for ICC World Cup 2015.

CricketCountry (CC): The Ram Slam T20 Challenge has just begun. What do you hope to achieve this season, personally?

Henry Davids (HD): Obviously I would like to win more games for the franchise. We’ve done very well in T20 cricket, and want to get back in the Champions League T20 (CLT20). That’s the main aim for us, and for all the franchises.

CC: Your squad has some huge names like AB de Villiers, Faf du Plessis, and Morne Morkel, but they are currently in Australia preparing for the ODI series. How does this affect Titans’ chances?

CC: Do you feel that sometimes it can do more harm than good to have a lot of international stars in the side who might have to miss a lot of games from time to time? Does it affect the team balance or team morale?
HD: It does more good than harm.  Four or five players are in the national team and then when they come back you have to make spots. But it’s always nice to have those guys and the experience they bring to the squad. It will be nice to have them back.

CC: On paper the Titans looks like an unbeatable side, but for some reason the results haven’t quite come your way as much as you would like. Has the team done anything different this year to try and change that?

HD: Over the last three years we have qualified for the CLT20 twice. We even got into the CLT20 semi-finals two years ago. This year the same pressure is there. We have got the same players, but a few new faces as well. As professionals we will stick to our strong points and our game plan. It’s about staying in the zone for as long as possible. We will back ourselves on the day.

CC: You had an excellent start to your T20I career, scoring two fifties in your first three games. What went downhill from there?

HD: I went to Sri Lanka and didn’t do well there, and then my next series was in Dubai. Firstly I batted at No. 6 in one game; I think the national selectors had different plans. It was something out of my control so it was just about going out there and doing the best I could.

CC: Let’s talk about the Indian Premier League (IPL) now. What are your views on it?

HD: It is the biggest T20 tournament in the world. It gets the best players. It’s nice for most players to go and play there. If you get there, good, but if you can’t then it’s not something you can control. All you can do is control the controllable.

CC: Do you feel at times a lack of exposure means that some domestic South African players miss out on getting lucrative deals in T20 leagues around the world?

HD: Ram Slam is being telecast in India and Indians like cricket, so it’s not like there won’t be any exposure. Thanks to Sony Six for telecasting it.

CC: With the World Cup just a couple of months away, which team do you see as the dark horse who can spring a few surprises?

HD: New Zealand are a team to look out for. And West Indies, you saw what they did when they won the ICC World T20 2012. They came out of nowhere.

CC: What do you think South Africa’s chances are in the World Cup?

HD: The way we are playing at the moment we have a set squad; they know what they’re doing. Obviously you need a bit of luck and for things to go well. But I think South Africa have a very good chance in winning the World Cup. 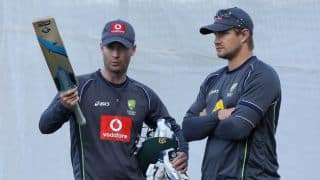 Australia vs South Africa 2014: Steve Smith rested for 1st ODI as Shane Watson comes back to the squad