While it was evident that Markande isn t build to be a pacer, Bali recognised Markande s slower one as a pacer to be a natural googly for a spinner

Punjab leg spinner Mayank Markande s rise from being an unknown entity to be on the verge of an international debut in over 15 months has been phenomenal. But, had Markande been stubborn about becoming a fast bowler when he was just 14 years old, the Bhatinda-born player might have been lost in obscurity. (ALSO READ: IPL stint with Mumbai Indians improved me: Mayank Markande)

Instead, his coaches recognised Markande s special talent and nurtured him. Coach Munish Bali, one of Markande s early coaches, has been widely credited for his switch from pace to spin, but Bali says otherwise. (ALSO READ: Sharing dressing room with Rohit, Dhoni keeping for me will be special: Mayank Markande)

I wouldn t say it was my advice alone that made him turn to spin, Bali tells CricketCountry.com. In fact, it was Jiwanjot Singh s (Punjab player) father, the coach at the academy at that time, who first flouted the idea. (ALSO READ: Mayank Markande All you need to know about India s latest T20I pick)

While it was evident that Markande isn t build to be a pacer, Bali recognised Markande s slower one as a pacer to be a natural googly for a spinner, and he picked on that – despite Markande s hesitance to try leg spin.

Yes, he was a very lean kid and didn t have enough strength in his shoulders to be a pacer, but he had a terrific wrist position and we worked on that, Bali says, adding, He was not convinced at first, but when he started getting success with spin, he also started working on it. His wrist was so strong that he was getting guys out with just the turn, we only had to work on his control and gradually his revolutions.

Markande himself credits Bali for being persistent with him.

Jab Bali sir ne bola, mujhe laga, spinner kaise ban jaaunga? (When Bali sir told me to try spin, I thought how can be a spinner?), but I had a natural googly and the coaches at the academy also told me to try it and we started working on it. I got the confidence to bowl leg spin when in a school match I bowled some six overs taking two wickets and didn t give away much runs, after that I was convinced remembers Markande.

Bali has always been an influential figure in Markande s early cricketing journey and after making him a spinner, the former India Under-19 coach, once again played a key role in Markande s life.

He was yet to appear for his 10th board exams and his father came up to me, reveals Bali, And asked me, What to do with him, should he concentrate on his studies, or will cricket be his future? . I told him that Udey (Mayank s nickname) will come good in cricket and that is his future. And after the India call-up, his father called me and said his advice was the right one.

When in 2017 Markande found himself out of the Under-23 Punjab side, it was Bali, once again, who instilled belief in the youngster to keep trying and not to give up.

We were going to the ground for practice and his morale was down, but I told him he has to keep working hard and trust his process and results will come.

He was selected for the 2nd game and then played the Vijay Hazare and then the IPL. During this year s Ranji Trophy season, I met him in a flight and told him that we had talked exactly an year ago and reminded him of that very day and how things panned out for him now, adds Bali. 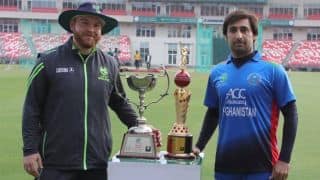 Afghanistan vs Ireland 2019, 1st T20I, LIVE streaming: Teams, time in IST and where to watch on TV and online