How George Hirst sent a band-man to War

How George Hirst sent a band-man to War

George Hirst s greatness as a cricketer was only rivalled by his genial attitude.

George Hirst needs little introduction. You can add little to a tally of over 36,000 runs and 2,700 wickets at First-Class level. In a Yorkshire side that won the Championship 9 times in 20 seasons, Hirst stood out as a colossus among some of the greatest names in the history of the county. He did the 1,000 run-100 wicket double in a season 14 times, including 11 in a row between 1903 and 1913. This included 2,385 runs and 206 wickets in 1906: till date he remains the only man to do the double-double in a season; an encore is very, very unlikely.

There have been swerve (swing) bowlers before Hirst, but none of them used the art as efficiently. So devastating was Hirst s swing that it prompted Sammy Woods to exclaim: How the devil can you play a ball that comes at you like a hard throw-in from cover-point?

Hirst loved his cricket. He enjoyed it enough to ensure he got the most out of it. His teammates did the same, but there was a sort of cheeriness in Hirst that made him stand out among peers (a smiling Yorkshire cricketer!). The ubiquitous smile was so broad that it, to quote Lord Hawke, went right round his head and met at the back.

Yes, Hirst was immensely popular, even in the last days before sinister shadows of The Great War descended on England. Surrey were playing Yorkshire.

Confusion over the venue

In the AA Thomson mentions the venue as The Oval. That is not possible. Surrey and Yorkshire met twice in 1914, at Bradford and Lord s. Of these, the Bradford match began on May 25, 1914 (this was the match when Jack Hobbs hit a six to push the hour hand of the pavilion clock back), over a month before the assassination of Archduke Franz Ferdinand.

Surrey s home match against Yorkshire (also Hobbs benefit) had to be rescheduled to Lord s after The Army had acquired The Oval. Perhaps that was what Thomson intended to mean. The starting date, August 13, seems just about right.

The telegram and the instructions

A Kirkheaton band-man called Harry Stead was in the crowd. As the match progressed, a telegram reached the Stead residence: Harry had been summoned to the barracks.

But how to reach out to her husband? Mrs Stead thought hard before she came up with a novel plan: she sent a telegram to Hirst, who was playing in the match, providing a gist of the situation.

Hirst was fielding at his customary position at mid-off as the telegram boy rushed on to the grounds (they used to do that). Before the boy could leave, Hirst gave the instructions: Sitha, go around the boundary and whenever you see a soldier in a red coat ask him if his name s Harry and if it is tell him to get off home like billy-ho. And if two other chaps called Harry went running home to their misuses it wouldn t do em any harm.

Harry Stead made it on time. 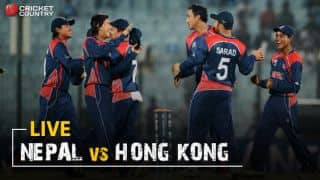