How important is India's ODI series against South Africa?

How important is India's ODI series against South Africa?

the one series to tackle them, which is what makes it so important. 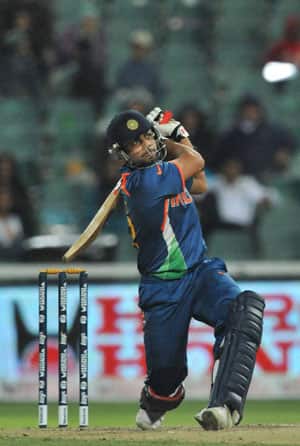 Gautam Gambhir will occupy the No 3 slot, displacing Virat Kohli, who scored a bucket load of runs at that pivotal position in 2010 © Getty Images

By Rishabh Bablani
The Test series still lies in the balance as I write this, but the ODI series that follows is of great significance, and not just because Sachin Tendulkar’s playing this time.

Speaking of the man, he last played an ODI on February 24, 2010, when he made that double ton against South Africa. This made me realize that the coming ODI series will be the first time in around a year, that India is playing a full-strength side, if one can say that. India had a bunch of makeshift openers playing at various times last year, like Murali Vijay, Dinesh Karthik, Shikhar Dhawan and Parthiv Patel, of whom only Patel made an impact, scoring back-to-back fifties in the limited chances he got. And what it did was push him above Dinesh Karthik, whose decline is quite surprising. But neither are likely, as opener or keeper, to make the World Cup squad.

It’s clear the openers will be Virender Sehwag and Sachin Tendulkar, which effectively splits the Sehwag-Gambhir combine. Gambhir will occupy the No 3 slot, displacing Virat Kohli, who scored a bucket load of runs at that pivotal position in 2010. That’s a great deal of Tendulkar-induced gravity, everyone’s falling down the order. Then there’s Yuvraj Singh at #5, Mahendra Singh Dhoni at #6, after which there’s another problem: Who at #7?

Suresh Raina has been a superb finisher for India in ODIs, and he seemed to have cemented his spot, even if his recent form is far from satisfactory. And that means India will be playing seven batsmen, much like the ’03 World Cup. This is the ideal batting order, in my opinion, because between Sehwag, Yuvraj, Raina and Kohli, we have enough part-timers to complete 10 overs (or more if the regular bowlers mess up). This allows us to play both our best batsmen and our best bowlers – Zaheer Khan, Ashish Nehra, Praveen Kumar and Harbhajan Singh as the lone spinner.

There’s an alternate theory that having an all-rounder at #7 would balance the side, which is technically true. But we don’t have one. What we have are bits-and-pieces players, like (dare I mention) Ravindra Jadeja, who has finally lost a starting spot in the XI. Ravichandran Ashwin has come a long way as a bowler, but his attacking nature marks him out as a bowler who can be caned by good batsmen. Yusuf Pathan made a strong case for himself with that blistering match-winning century against the Kiwis, but he is still a hit-and-miss player with an economy rate of close to 6, not worth dropping Raina or Yuvraj. And we still hear a lot of whinging about Irfan Pathan’s continued exclusion, so I will say that he isn’t in the World Cup probables for a good reason. He has been unfit for quite some time now, and even if he was fit, he doesn’t make the grade as either a batsman or a bowler. He isn’t quite a #7, and his bowling has dropped to trundler level, capable of moving the ball only in helpful conditions, and not for long.

Moving on to the bowling, we know that Zaheer, Nehra and Praveen Kumar are the starting quicks (or mediums, whatever), but we’ve yet to settle on the back-up bowlers. Munaf Patel would be my pick, for his accuracy as a first-change bowler, but there are question marks about the rest. S Sreesanth and Ishant Sharma are terrible in limited-overs and can get a fair tonking because they tend to drop short a lot, while Vinay Kumar is a terrible death bowler and both Umesh Yadav and Jaidev Unadkat are too raw.

So it’s pretty clear that there are quite a few issues with the team, and just the one series to tackle them, which is what makes it so important. India then has only a couple of practice matches (February 13 v Australia, February 16 v New Zealand) to test the chosen combination in home conditions, before the World Cup opener against Bangladesh on the February 19.

(Rishabh Bablani is student of Financial and Business Economics. He watches so much cricket that he sometimes feels that it’s watching him back, but not in a creepy way! He is also a famous leg-spinner in an alternate dimension. He blogs at The Adventures of Billy the Worm)

Eden Gardens can be ready for World Cup