By Aayush Puthran Pakistan umpire Asad Rauf's alleged affair with the Mumbai model-actress Leena Kapoor has shocked the cricketing world. While it has miffed some and inspired others, it has left Tiger Woods pondering over how many endorsements Rauf stands to lose because of the latest expose. 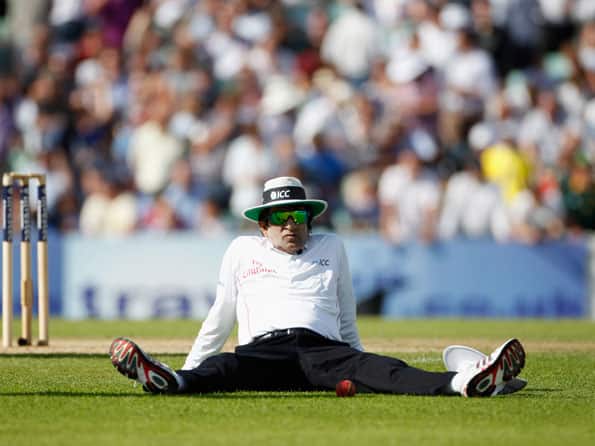 Pakistan umpire Asad Rauf’s alleged affair with the Mumbai model-actress Leena Kapoor has shocked the cricketing world. While it has miffed some and inspired others, it has left Tiger Woods pondering over how many endorsements Rauf stands to lose because of the latest expose.

Not to lose out on the opportunity, Sach ka Saamna has decided to come up with a special show having the Pakistani umpire as the contestant. They have roped in Anil Kapoor as the host for the special episode to deliver his signature ‘What a player!’ line.

Rauf seemed elated by the show’s move and believes that it will give him a public platform to prove his innocence.

“I always knew the producers of the show are going to select me and not Leena. I’m so famous and have so many fans who want to click explicit photos with me. The show wants to bank on my fame. No harm in that. The fame and adulation is a normal thing for me,” Rauf said, seemingly with modesty.

He also added that he was well prepared for the show.

“I’ve spoken to the ISI before confirming on my availability. I’m well prepared now,” he added.

Pakistan Cricket Board Chief Zaka Ashraf quickly came to laud BCCI’s efforts to have Rauf invited in the show as a contestant.

“We appreciate BCCI’s efforts to resume cricket ties between the two countries.”

In Mumbai, however, the Shiv Sena called for a bandh.

He added angrily, “Asad is not just an umpire. He is a Pakistani ‘player’. And he gets to be a part of the IPL without even getting the UK citizenship. Doubles standards!”

As a mark of protest, Afridi announced his retirement from all forms of the game.

“The selection panel discussed various candidates who could replace Afridi. Some could bat, some could bowl. We came up with some really good players to replace the all-rounder. Zulqarnain Haidar wasn’t considered. However, just a few minutes back, I received a text message from Afridi and he has decided to make a comeback to cricket. He will let the media know about the decision tomorrow. So, as for now there are no replacements,” Qasim said in the press conference.

However, Afridi’s point about Rauf being the only Pakistani ‘player’ in the IPL left the CID in a tizzy. Not authorized to take over the case, they decided to look after it secretly. Their conversation was caught on a secret camera by India TV.

Excerpts from the conversation:

“Raufy would come to me during the IPL matches asking for tips on girls. I would often mock him considering his age and his notion that he was ‘famous’. But that man has been seriously good. At 54, he inspires me.”

Warne also said that he expected one of the young players to take over the mantle from him in the fifth season following his IPL retirement.

“It’s disappointing when guys like Pomersbach fail. He failed miserably. I had least expectations from Raufy. But mate, he did it.”

At the other end of the planet, the news about Rauf’s alleged affair with the model came as some relief to Tiger Woods.

“I don’t know much about cricket, but ya I heard some famous guy with lots of fans has been involved in an affair. It’ normal in sports, not surprising. I’ve been telling ya guys, but ya’ll don’t listen. Damn ya, media,” Woods said with a tone of defense.

“By the way, how much does he stand to lose in endorsements?” Brad Hogg may be 41, but he has earned his place in the Australian T20 squad