The MRF academy for budding pacemen is all set to be rebranded as the McDonald’s Pace Foundation. An unprecedented multi-million dollar deal will soon be signed between the American fast food giant and the Chennai based Indian firm. 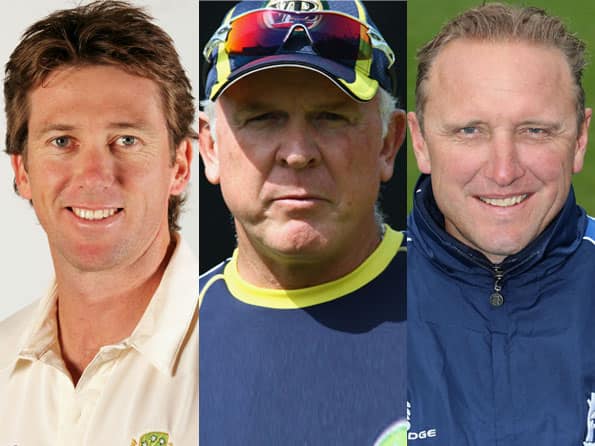 The MRF academy for budding pacemen is all set to be rebranded as the McDonald’s Pace Foundation. An unprecedented multi-million dollar deal will soon be signed between the American fast food giant and the Chennai based Indian firm.

“McDonalds approached us with an exhaustive draft proposal immediately after learning that we were looking at former pace bowlers Glenn McGrath, Craig McDermott and Allan Donald as possible candidates to replace Dennis Lillee,” Koshy Varghese, Executive VP Marketing of MRF, told reporters. “The corporation intends to leverage on the names of the legendary fast bowlers to create the McDonalds Pace brand. According to the roadmap presented to us, the plan is to employ all three of them.”

“All three are great fast bowlers who can definitely add a lot of value to the pace bowling talent in India. Besides, we are also negotiating with Brian McMillan, as a possible brand ambassador for our Big Mac burger.

“To on-board all four of them we will implement our standard business model by setting up a chain of fast bowling academies across Chennai. We may also adapt some best practices of Starbucks in this regard.”

Ms Pai denied that too much significance was being given to the names of the bowlers.

“It was purely an entrepreneurial opportunity to find great bowlers of the past with names that made a lot of business sense. In the branding world, names are of phenomenal importance. Why do you think we always hear MRF rather than the full – Madras Rubber Factory? There is a reason why they focused on fast bowling – to introduce the concept of the leather ball, to get away from the sticky image of rubber.”

It has been learnt that stumps in the shape of the yellow arches will be seen as the new icon of the McDonalds Pace Foundation.

Ms Pai also added that McDonalds was the ideal sponsor for fast bowling. “If you go back in history, the first great pairing of fast bowlers was the Australian duo of Jack Gregory and Ted McDonald. Besides, it makes immense sense for a fast food chain to be associated with a fast bowling academy.

“We are looking at promoting McDonalds products as fast food for lean, mean, fast men – who will bowl quick with the brand attitude ‘I’m loving it.’ It will be a fitting answer to the Eric Schlossers and the Morgan Spurlocks who accuse the company of promoting obesity – Fast Food Nation, Supersize Meand all that. Our business goal is to produce a fast bowling nation.

“Also, once they see the amount of hard work the students are put through in the academy, the PETA activists will realise that we don’t torture only animals.”

However, the brand consciousness will prevent the revamped academy from engaging the services of the other name thus far being considered for the coaching job, Troy Cooley.

“With allegations of engaging cheap labour in the third world, and the soya linked slavery charges already levelled by Greenpeace, we can’t recruit someone with that provocative a last name,” Ms Pai explained.

There is some apprehension in the restaurant industry about the advisability of launching a new McDonalds initiative in Chennai, a predominantly vegetarian city.

Ms Pai, however, put such consternations to rest. “This provides us with a great opportunity to experiment with an idea that has been cooking for long. We have been running kosher outlets in Israel for a while and our track record has been excellent, and there is no reason why the same cannot be adapted in Chennai with the launch of the McDosa. The plan is to link the vegetarian image with health and longevity while maintaining the cricketing theme. To do this, we intend to engage the 95-year old cricket statistician Anandji Dossa as brand ambassador for this venture.”

In a press release, McDonalds CEO Jim Skinner, who retires on June 30, said that MRF and McDonalds have had longstanding synergies.

“In the 1960s, while we were expanding our business throughout the United States, MRF became the first Indian company to supply tyres to our country. You can say we collaborated to keep tyres on the American as well as his car.”

“This will allow the new CEO Don Thompson to start his stint with a quick home run between the wickets,” he added, obviously not yet used to the unfamiliar cricketing metaphors.

It is reported that the biggest competitor of McDonalds had dropped the idea of presenting a counter proposal to MRF after learning with dismay that the Caribbean fast bowler Lester King had died way back in1998.

However, according to reports as yet unverified, Burger King is now trying to rope in the recently-retired Isa Guha and the legendary West Indian batsman Vivian Richards to launch “The King and I” batting academy. But, as of now, the details of this whopper deal remain under wraps.

If both the ventures succeed, the Indian teams of the future promise to be anything but easy meat.

Please note: The above article, as indicated in the headline, is a spoof.