Those who crib that Indian cricket kill other sports in the country, think again! Taking time out from their packed shootings for endorsements, Mahendra Singh Dhoni and Virender Sehwag spent a long time advising Leander Paes and Mahesh Bhupathi how to combat the media lapping up from yet another of their fall-outs. 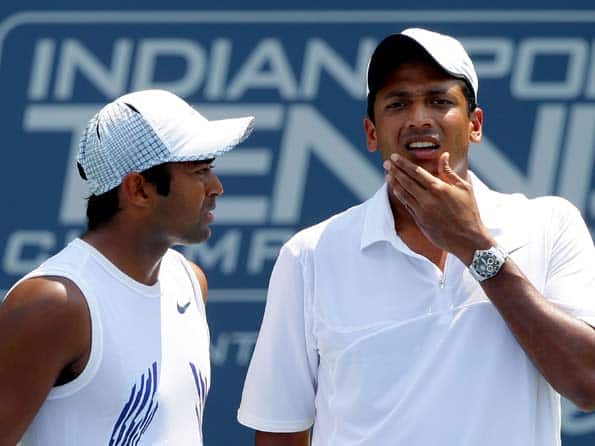 Those who crib that Indian cricket kill other sports in the country, think again! Taking time out from their packed shootings for endorsements, Mahendra Singh Dhoni and Virender Sehwag spent a long time advising Leander Paes and Mahesh Bhupathi how to combat the media lapping up from yet another of their celebrated fall-outs.

It may be recalled that that reports of a rift between Dhoni and Sehwag have been doing the rounds for quite some time. The two, however, have been repeatedly denied having any differences between them.

The All India Tennis Association (AITA) is most impressed by the feud-management genius of the two high-profile cricketers and approached the Board of Control for Cricket in India (BCCI) to get Dhoni and Sehwag to advice Paes and Bhupathi. The BCCI lost no time in arranging a meeting between the four superstars of Indian sports.

Paes said, “The beauty of the Sehwag-Dhoni rift was that they repeatedly denied it with conviction. Hesh (Bhupathi) and I couldn’t conceal the truth from the press and washed our dirty linen in public. On the other hand, the cricketers have been fantastic and behave as if nothing has changed. We have a lot to learn from that.”

Things didn’t start off smoothly as Dhoni suggested a rotation policy for the Olympics so that the youngsters would get majority of the chances and only one senior would feature. Dhoni reportedly told Paes and Bhupathi, “Well of course! You guys are seniors and I think you should give the youngsters a chance. Age may have caught on and you are slow. However, we must rotate you’ll so that youngsters play more. So if Mahesh plays the first round, Leander should play the next. By the time you get to the final, you can decide who’ll play.”

The suggestion was vehemently opposed by both Paes and Bhupathi. They even pointed out the difference between cricket and tennis to a confused Dhoni.

In fact, Sehwag was more vocal in his opposition, compared to the two tennis stars. He said, “Mahi, didn’t you see Leander reached the mixed doubles finals at Wimbledon and Bhupathi won the same at the French Open.”

This instantly brought back memories of the Australia tour where Sehwag dismissed Dhoni’s claims on the seniors in Team India being slow fielders by reminding the press of a spectacular catch he had taken.

Sehwag then turned to Paes and Bhupathi and remarked in his typical straightforward manner, “I was under the impression that Sreesanth was the biggest drama queen, but I was wrong. He has two competitors now in you both! I would like to go beyond the agenda and offer you a simple but very effective advice. See the ball, hit it. You don’t have to think about anything else. When I am batting in the middle, I am not concerned about Dhoni’s presence in the dressing room. I don’t even care whether I am on zero or 99; if it is in my zone I hit it. Likewise, you shouldn’t be bothered if the score is 30-0, 0-40.”

Once things cooled down, Paes and Bhupathi turned to Dhoni for his advice on dealing with the rift. Dhoni said, “Well of course, I always tell the team. ‘We have to do it for Sachin.’ ” That is the only thing that unites them you know. Maybe you guys should say, ‘We have to do it for Ramanathan Krishnan.’”

Through all that, Sania Mirza cried foul and criticised Paes, Bhupathi, Dhoni and Sehwag for excluding her from the reconciliation process. She moaned, “This is typically male chauvinistic behaviour on their part. I haven’t been invited to help them resolve the rift. Trust me, I have expertise in dealing with disagreements and know a thing or two about them. Married to Shoaib Malik, I know how cricketers can fight amongst themselves. I could have passed on better advice to Paes and Bhupathi.”

Meanwhile, Vishnu Vardhan and Rohan Bopanna, the two tennis players who are supposed to partner Paes and Bhupathi respectively, also voiced their disappointment. Speaking on behalf of both, Bopanna said, “We feel like Manoj Tiwary. Ignoring us for the meeting is similar to the treatment the batsman has received from the Indian think-tank.”

The AITA selectors had a meeting with Krishnamachari Srikkanth who gave them crucial tips in dealing with press. He said, “Macha! Whenever you select a team, you must say, “I can assure you, nobody has been dropped and the team has been picked on performance. In case they get too inquisitive, just say “Boss, you shut up.” That should set them right.”

Tatenda Taibu retires from all forms of cricket