Not everyone was particularly upset at the proceedings; there were those who saw the lighter side of it all.

The Board of Control for Cricket in India (BCCI) said they were “shocked and surprised” at the decision made by the WICB to cancel the series. According to the press release by the BCCI, the WICB had informed them that their players would return immediately. BCCI also assured Indian fans and supporters that the decision to cancel the ongoing series was taken exclusively by WICB, and was neither supported nor condoned by the BCCI.

However, as it happened not everyone was particularly upset at the proceedings. There were, as always, those who chose to see the lighter side of it all.

The BCCI offered a very strongly-worded response to the whole issue, which was duly looked at from a somewhat interesting perspective…

BCCI to take up the matter with the ICC. The mail – From : nsrinivasan@bcci.tv To : nsrinivasan@icc-cricket.com Sub : lol #repeat

And then the news came that Sri Lanka would come to India’s rescue, agreeing to appear for a five-match ODI series. The fact that the entire series was set up in what seemed like mere moments was a bit of a shock and surprise…

Why have Sri Lanka agreed in principle to tour India Because the headmaster said so #INDvsWI — Gaurav Sethi (@BoredCricket) October 17, 2014

And finally, there was that sagely observation that with all the ODI cricket, Test cricket was bound to be on the backfoot. Never mind that the ICC World Cup 2015 is just a few months away. 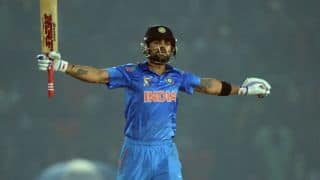