Ian Bell 100 Test matches for England: Another landmark moment in an impressive career

Ian Bell 100 Test matches for England: Another landmark moment in an impressive career
By Bharath Ramaraj

One of the most crucial cogs of England’s batting line-up, Ian Bell will play his 100th Test match against Sri Lanka at Headingley. Bharath Ramaraj looks back at what has been a terrific journey of a batsman who was tipped right from the start of his career to succeed at the highest level.

In 2001, when the senior England team were getting pummelled left, right and centre by the all-conquering Australian setup, Nottinghamshire were playing Warwickshire in a County game at Edgbaston. Warwickshire, who won the toss and elected to bat, were suddenly reeling at three for 30 under overcast conditions.  Experienced campaigners Mike Powell, Nick Knight and Mark Wagh were all back in the pavilion.  In walked the 19-year-old Ian Bell. There was already a groundswell of opinion among the good judges of the game that Bell would become a great batsman. But at that time, he hadn’t yet left a strong marker. However, on August 3, 2001 everything changed.

Bell played like a 50-Test veteran and went onto make a marvellous hundred. Early on in his innings, Bell seemed to be reconnoitring the situation on hand; including the wicket that was making the ball dart around a bit. Once set, Bell played sweetly-timed shots to complete a regal century. Interestingly, it was also a game when another future English great, Kevin Pietersen, played a swashbuckling knock of 72 for Nottinghamshire. Even in 2014, when a confident Bell will stride out to play in his 100th Test against Sri Lanka at Headingley that unquenching thirst to notch up big scores hasn’t diminished one bit.

Just like every sportsperson going around, Bell has had his fair share of ups and downs. During the 2005 Ashes series, Bell seemed like a lost explorer from the renaissance period, who trudged back to the pavilion wondering where his next run would come from. In 2009, after the first Test against the West Indies at Jamaica, he was dropped from the unit. In 2011-12 against Pakistan in UAE, he was short of runs. However, every time Bell has struggled for form, he has come back with aplomb, sometimes to sheer disbelief from fans and critics alike with breathtaking batsmanship.

If we jog our memory back to 2005, after floundering to the depths of despair against Australia, Bell took on the gauntlet of playing a rampaging Shoaib Akhtar with a glorious century at Faisalabad. His nimble footwork even against top class bowling was almost soothing to watch; he went onto compile a great hundred that day.

In 2008, when he walked out to bat in the sacred temple of cricket, Lord’s, Bell’s magic floored South Africa, and he went onto make 199 — cruelly falling just one run short of a richly deserved double ton. He eventually amassed his first double hundred against India at the Oval in 2011. During the final Ashes Test in 2009 at the Oval, Bell was on a comeback trail and there was immense pressure on him to perform, especially after he had flopped in the previous Test at Headingley. On a tricky track, it was Bell’s knock of 72 that went a long way in helping England to wrest back the Ashes urn from Australia.

At the height of his prowess in Ashes 2013 held in England, Bell — with aesthetic grace — scored three hundreds to take England to their third consecutive Ashes triumph.  When Bell played those late cuts, he seemed to be using a vivid brush to paint the lush green outfields with shots of pristine elegance.

As Ian Bell gets ready to play his 100th Test, there is even a feeling that he may replace a misfiring Alastair Cook soon as the captain of England. Even when he played for England Under-19 team in the 2000 Under-19 World Cup in Sri Lanka, Warwickshire faithfuls tipped him to become the national captain. If and when he is appointed as the skipper, it will be interesting to see how he shoulders the responsibility of being the leader, and more importantly if he can continue to explore the outer limits of his game by reaching greater heights. 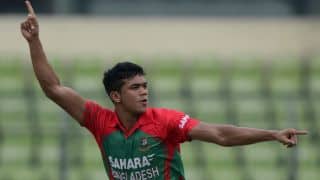