Ian Bell became the fourth England player to complete the landmark of playing 100 Tests at or before 32.

Ian Bell became the fourth England player to complete the landmark of playing 100 Tests at or before 32, when he took field in the second Test against Sri Lanka at Headingley. Bharath Ramaraj looks at the other three cricketers who played 100 Tests by the age of 32, and how England have been reluctant to give a chance to cricketers when they are young.

When Ian Bell walks to the middle to take strike in the first innings of the second Test match, he will be batting in his 100th Test. After spending gallons of sweat and toil, Bell will be a satisfied man. He has made runs all over the cricketing world, and with loads of skill he has shown his ability to succeed in times of crisis.

Interestingly, at 32, Bell is only the fourth Englishman of that age to play 100 Tests.  It tells you that England don’t give Test caps to teenagers (unless it is Brian Close). Ben Hollioake too made his Test debut at a young age. Bell, from a tender age, was acknowledged as a precociously talented batsman and that led to selectors showing immense faith in him and giving him a chance to wear the white flannels when he was 22, against the West Indies at the Oval in 2004.

The others in the list are Michael Atherton, David Gower and the present England captain, Alastair Cook. Among the lot, Atherton was the youngest to reach the mark. The veteran batsman went onto play 115 Test for England. Atherton played at a time when it seemed like England found themselves in a long trench of heavy defeats. However, Atherton on many occasions, especially against the West Indies and South Africa, shouldered the responsibility of being the key batsman in the setup. He wasn’t exactly a magisterial magician with the bat, but was a gutsy batsman on the back-foot.

Gower, the elegant southpaw, reached the coveted landmark of playing 100 Tests against the rampaging West Indies at Leeds in 1988. The left-hander could play strokes of surreal beauty. Gower was arguably at his best when England toured Australia in 1986-87. With uncanny timing and placement, he notched up two hundreds, including one at WACA to take them to a series triumph.

Cook, England’s current captain made his Test debut at Nagpur in 2006 and straightaway scored a century. Cook has many splendid achievements to his name; including leading England to a memorable series win in India. The annus mirabilis continued for Cook, as England also retained the Ashes in 2013. But he has struggled for form in recent times and the 5-0 whitewash Down Under would have hurt him big time.

It is also interesting to note that Gower, Atherton and Cook under the weight of expectations didn’t exactly touch tall peaks in their 100th Test. Maybe Bell will break that jinx with an innings of timeless beauty. 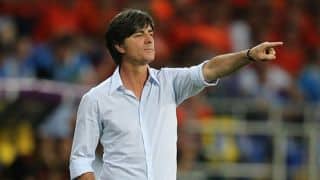